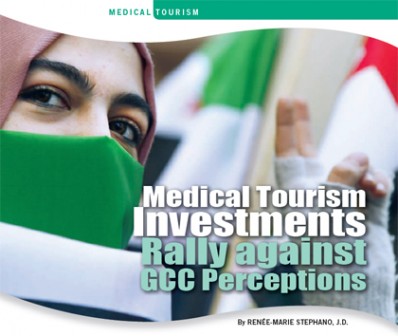 Crisis and conflict in Egypt and Syria have dominated news out of the Middle East the past few months, but a closer look beyond the headlines reveals that international tourist arrivals to the region actually rebounded – and that’s half the battle won for health and tourism authorities looking to attract international patients to Gulf Cooperation Council nations.

During the first half of 2013, tourism travel to the Middle East increased by 13 percent when compared to the same period last year, according to the United Nations World Tourism Organization. Promoting the Middle East as an attractive travel destination is a critical cornerstone in the economic blueprint of many nations in the region, and particularly for hospitals and clinical facility administrators interested in luring medical tourism patients to their sites for affordable and quality care.
‍

Although GCC governments have prioritized efforts to improve healthcare – building hospitals and clinics in the last few years – the trip, in and of itself, is a key component in the decision-making processes of medical tourism patients – both international and domestic – who choose to undergo medical care in the region, said a leading healthcare insurance executive, who oversees the Middle East and Africa.
‍

“Destinations have to be very aggressive in their marketing. Nations need to have a long-term vision to build a winning strategy, and that begins with choosing a segment of care and then promoting the destination, rather than the facility.”
‍

AlJaibeji, who presented his thoughts at a recent webinar, “Understanding and Attracting Patients from the Middle East/ GCC Region,” sponsored by the Medical Tourism Association®, said most medical travelers choose their destinations based on specific hospitals and doctors resulting from word-of-mouth discussions, the internet, and cultural preference.
‍

GCC nations – the Middle East and North Africa — make up one of the fastest-growing and, unfortunately, most unhealthy regions in the world.

GCC nations – the Middle East and North Africa — make up one of the fastest-growing and, unfortunately, most unhealthy regions in the world, said Dr. Mussaad Al-Razouki, chief executive officer, at Kleos Healthcare Corporation, in Kuwait.
‍

Not surprisingly then, almost half of all patients in the Middle East and neighboring nations are willing to travel outside their native countries to seek care for serious medical conditions. Consider a Gallup poll which found 65 percent of Kuwaitis surveyed who said they would prefer medical care abroad, and another 16 percent who said they have a physician they see regularly. On the other end of the healthcare spectrum, 35 percent of Saudi patients said they would prefer care abroad and 38 percent see a regular physician.
‍

Al-Razouki said GCC patients are looking for better access to care; in this case, for specialty procedures, such as heart transplants, which are unavailable in GCC nations, where the focus lies heavily on primary and secondary care and places a strong emphasis on cosmetics.
‍

Although the quality of care in GCC facilities is improving – 10 percent of all hospitals are Joint Commission International accredited – domestic patients still perceive Western nations and those in Southeast Asia to have higher quality standards than local providers.

As an accommodation and policy shift that began this year, GCC citizens who seek medical treatment in Thailand can stay in the Pacific Rim nation for 90 days without requiring visas. The move was facilitated by the Royal Thai government to facilitate GCC patients who seek lower costs in Thailand, but require longer visits for medical procedures and treatments.
‍

In the next decade, GCC patients seeking affordable and top-notch care overseas may be exacerbated by a significant increase in the over-65 population, which is generally more susceptible to disease, such as heart ailment, hypertension and diabetes.
‍

AlJaibeji said complex conditions like these will emphasize the need for advanced medical procedures, which remain an expensive proposition for GCC nationals and expatriates. In anticipation of this patient surge, government authorities have targeted new strategies and regulatory reforms aimed at enhancing and developing healthcare infrastructure and, in turn, fueling greater investment into the GCC medical tourism industry.
‍

Increased expenditures have, in some cases, led to significant expansion in the healthcare sector and lucrative collaborative opportunities for the private sector.
‍

Dubai, which accounts for a lion’s share of tourists among various destinations in the Arab world, has already launched a long-term strategy to make the nation a top destination for medical tourism.

Designs for proposed health projects include the rebuilding of Rashid Hospital at a total cost of $3 billion and with a capacity of 900 beds, expanding the current trauma centre to 160 beds, increasing out-patient clinics to 160 treatment rooms, establishing new centers for heart, cancer, kidney and cosmetic surgeries; and the addition of six new specialized facilities. Shaikh Mohammed bin Rashid Al Maktou says he also envisions two five-star hotels to serve those who accompany patients.
‍

“The trip is important not only for the patient, but for the family that travels as well,” said AlJaibeji. “What types of services do these healthcare consumers require? How does the hospital accommodate for their culture and special requirements? When more attention is focused on these tourism components, the facility then becomes a popular destination.”
‍

In an effort similar to Dubai and others in Qatar and Bahrain, the Abu Dhabi government plans to set up a financial free zone on Al-Maryah Island, where foreign companies will be able to establish businesses fully operational under international law and financial market regulations.
‍

Government officials are hoping the tax-free zones, which have become all the rage of nations determined to elevate the combined revenues related to tourism and healthcare, will foster economic development; investment in healthcare infrastructure and international centers of excellence; establish world-class clusters of hospitals, life science and medical research, and education; and serve patients locally, regionally and internationally.
‍

DNA Health Corp., a U.S.-based integrative health and wellness specialist, plans to open its first overseas flagship center on Abu Dhabi’s Saadiyat Island. The center is targeting both the region’s residents and visitors looking for a different approach to health and wellness, a favored attraction of wealthy adult travelers.
‍

Another international medical city which hopes to boost inbound medical tourism from the Middle East to the GCC region is scheduled for development in Salalah, Sultanate of Oman. The Apex Medical Group concluded final stages toward this medical tourism investment, which will include a multispecialty tertiary care hospital and three medical centers of excellence for organ transplants, rehabilitation and diagnostics and multiple surgical procedures.
‍

Officials in this often volatile region realize even the best laid plans can be faced with an unforeseen hit when crisis strikes. The hostility and violence that has engulfed the Middle East and GCC region for the past half-year isn’t the type of postcard that authorities making a push for medical tourism revenues want to send to potential patients, both those overseas and across neighboring borders.
‍

Tourism and expatriates living and working in the region provide a major source of revenue to GCC economies. While leisure travel and most certainly medical tourism have dropped dramatically to local destinations following the Arab spring and subsequent unrest, businesses which decide to scale back operations and governments that advise against travel to the region won’t do much to strengthen healthcare initiatives and will instead hamper the share of tourists flowing to GCC nations.
‍

The hope is that the combined forces of civility and a robust economy that features sound investment from a strong private sector presence in healthcare will quell perceived fears, stimulate additional funding and expansion, and bring highly differential medical services and products to a region in great demand.