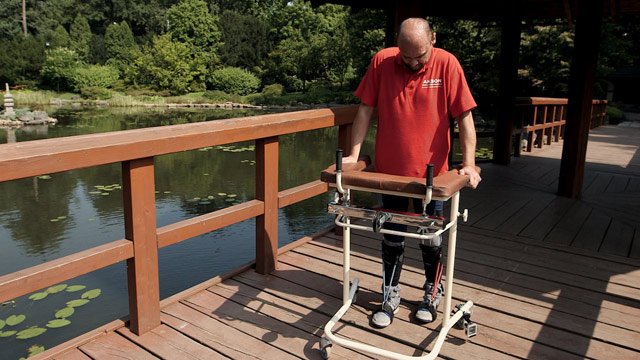 Four years removed from a knife attack that severed his spinal cord, Darek Fidyka is back on his feet with the help of a walking frame, and some 3 million patients across the globe would like to stand and cheer if they could.
‍

Instead, for now, they and potential medical tourism patients hoping for a cure to their conditions — can marvel at the 38-year-old Bulgarian man, who had lost movement from the chest down, and gain inspiration that their paralysis might someday be reversed.
‍

When there is nothing, you can't feel almost half of your body, said Fidyka, during a To Walk Again, a BBC documentary. You're very helpless, lost. But, when it comes back, it's like starting afresh, as if you were born again.
‍

Doctors are delighted, including Geoff Raisman, chief of neural regeneration at University College London's Institute of Neurology and research team leader, who called his patient's steps more impressive than man walking on the moon.
‍

Indeed, Neil Armstrong first walked on the moon some 45 years ago, which was close to the time researchers began contemplating the idea to enable spinal nerves to repair themselves. Raisman believed the complex neural circuitry in the nose that gives rise to the sense of smell is the only part of the nervous system that regenerates throughout life. He first sampled his approach on animals.
‍

The eureka moment for me was Christmas in 1997, when I first saw a rat — that couldn't direct its hand — put its hand out to me, said Raisman. It was two o'clock in the morning, by the way. That was the eureka moment because I realized that all my thoughts that the nervous system can be repaired our true.
‍

Advancing Raisman's theory, Polish surgeons at Wroclaw Medical University injected regenerating olfactory ensheathing cells (OECs) taken from Fidyka's nose and transplanted them into his back to reconnect the damaged fibers in his spinal cord. Two years after the surgery and follow-up treatments, Fidyka, who had shown no signs of recovery, can now walk, but he will be the first to admit he tires quickly.

I think it's realistic that one day I will become independent, said Fidyka. What I have learned is that you must never give up, but keep fighting because some door will open in life.
‍

Renée-Marie Stephano, President of the Medical Tourism Association, said the collaborative effort by an international research team represents another step toward mastering one of the greatest challenges in biomedical science.
‍

To think, a man completely paralyzed from the waist down can walk again is truly miraculous and offers hope for millions who were otherwise hopeless and disabled with spinal cord injuries, she said.

But, this provocative breakthrough also validates and advances some current studies that are looking into the ethical use of human stem cells to treat multiple diseases.

Scientists hope to treat another 10 patients in Poland and Britain in the next five years.
‍

Our team in Poland is prepared to consider patients from anywhere in the world who are suitable for this therapy, said Dr. Pawel Tabakow, a Polish neurosurgeon who specializes in spinal injuries and worked alongside the British researchers to develop the technique to implant the OECs. It's amazing to see how reorganization of the spinal cord, something that was thought impossible for many years, is becoming a reality.
‍

While some patients with partial spinal injury have made remarkable recoveries, a complete break is generally assumed to be unrepairable. Stephano cautioned that Fidyka's treatment might not be suitable for others and that more results need to be reproduced beyond a single patient. And that means more funding before medical tourism patients can start knocking on doors for treatments.
‍

This information is being made available to researchers around the world so together we can fight to finally find a cure for this condition which robs people of their lives, said David Nicholls, who set up the foundation after his teenage son, Dan, suffered a catastrophic neck injury in Australia, in 2003.
‍

Raisman said development of the technique was immensely gratifying and that continued research needs to reach a point where the procedure can be rolled out worldwide enabling access to medical tourism patients and hope to all.

I believe we have now opened the door to a treatment of spinal cord injury, said Raisman. He (Darek Fidyka) can get around with a walker and he's able to resume much of his original life including driving a car. He's not dancing, but he's absolutely delighted.