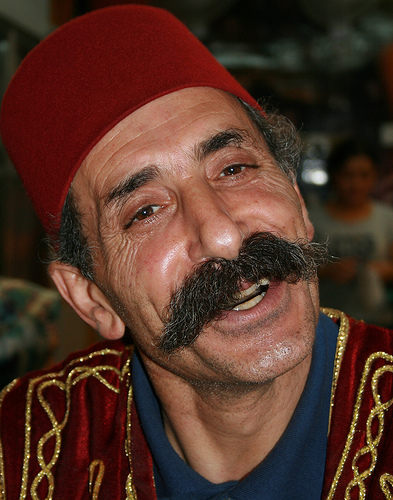 Turkey's economy is getting a facelift, a hair-raising experience of sorts that is not only sprouting the growth of whiskers above the upper lip, but profits in the country's booming medical tourism sector as well.

Long favored as a destination for the follicly challenged, Turkey’s cosmetic surgeons have for years offered hair implants to those balding on top. Now, moustache transplants for the face are growing in popularity, cosmetic surgeons and tourism agencies say, as men from the Middle East, Europe and Asia are coming to Istanbul seeking a virile addition for their upper lips.
‍

The procedure uses a technique called follicle-hair extraction, in which doctors remove clusters of hair from the more hirsute areas of the body and implant them along the lip or cheeks to magnify a mustache or beef-up a beard.
‍

Performed under local anesthetic, the surgery takes around five hours and can cost up to $5,000, cosmetic surgeons say. Medical tourism agencies have begun offering “transplant packages” combining facial-hair operations with a shopping vacation in Istanbul or beachside retreat on the Mediterranean coast.
‍

Most customers are foreigners, according to surgeons, as Turkey’s emergence as a place for facial-hair transplants comes as the number of Turks wearing mustaches has declined sharply.
‍

Selahattin Tulunay is one of the surgeons profiting from this bewhiskered boom. From his surgery clinic in an upscale neighborhood known as Istanbul’s Beverly Hills, Dr. Tulunay started facial follicle transplants two years ago and now says he completes up to 60 such operations a month.
‍

“The mustache is making a comeback, he told the Wall Street Journal as he leafed through a photo album showcasing his most-prized creations. If a man’s mustache doesn’t grow, he wants to know he can have one as a mark of masculinity. Our customers know that if they pay, we can deliver the results.”
‍

A 34-year-old businessman from Erbil, in northern Iraq, said he traveled to Dr. Tulunay’s clinic after years of low self-esteem over the patchy hair growth on his upper lip.
‍

“The mustache is very important in our culture and my wife supported me to get the operation, he said. Now, I feel much better. I’ve recommended it to my friends.”
‍

Facial-hair transplants are at the fringe of a broader medical tourism boom in Turkey, which last year generated $1 billion in revenues. The number of visitors Turkey welcomed specifically for surgical procedures rose to 270,000 last year from 156,000 in 2011, according to data from a 2012 report by Turkey’s Health Ministry.
‍

The report showed 100,000 people traveled to Turkey specifically for plastic surgery in 2012, although the numbers don’t break out figures for facial-hair transplants.
‍

The mustachioed and bearded stars of Turkish soap operas wildly popular across the Middle East, North Africa and the Balkans have helped again make facial hair a popular symbol of virility and machismo. Surgeons say many patients request the full-bodied mustache worn by Turkish singer Ibrahim Tatlises, which has long set the standard for top-drawer whiskers. Another popular style is the stubble beard worn by Turkish TV show heartthrob and model Kivan Tatlitug, surgeons say.
‍

“My patients often bring pictures of the stars they want to look like, but I never do what they say because it wouldn’t suit their face,” said Canan Melike Koksuz, a surgeon at Isom, an Istanbul cosmetic surgery practice, which says it has welcomed chief executives and celebrities from as far away as China and Australia for hair transplants. “Once there was less demand because facial hair was more political, but now mustaches and beards are more fashionable, and people want to look trendy.”
‍

It isn’t only men who are seeking ways to emulate Turkey’s rising stars. Clinics in the Middle East have reported that Arab women, who previously favored the full lips, small noses and protruding cheekbones of Lebanese singers, are now requesting the more natural looks of Turkish soap stars.

“Turkish TV series have introduced the natural look. Women who had nose remodeling operations in the past are now unhappy with the shape; they want their tip-tilted noses to look more natural,” said Zekeriya Kul, a plastic surgeon who says he recently moved from Dubai to his native Turkey to profit from the surgery boom.
‍

According to surgeons and agencies specializing in medical tourism, the vast majority of clients come from the Middle East, where facial hair still bristles with political meaning. To be clean shaven has for decades been a political statement of solidarity with the secular, Westernizing elites who were pre-eminent across much of the Arab world until the series of uprisings that came to be known as the Arab Spring.
‍

Despite Turkey’s emergence as a hub for facial hair transplants, the number of Turkish men wearing mustaches has declined rapidly, according to pollsters. A study by Istanbul’s TNS Market Research Company found that while 77 percent of Turkish men had mustaches in 1993, the figure fell to 34 percent in 2011 and is still sliding.