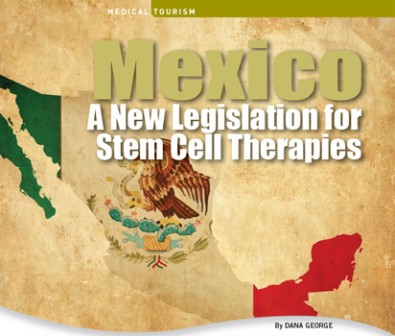 The federal legislature of Mexico has taken notice as patients from other countries continue to flock to their border state for medical care. On Dec. 7, 2011, the lower chamber passed new progressive legislation aimed at making the application of stem cell therapies more uniform. The updated legislation is slated to be heard in the senate in September 2012.

According to Dr. Rodrigo Robledo, commissioner of the State Commission for Medical Arbitration, State of Baja California, 350,000 people seek medical treatment in Mexico each year from California alone. Some travel to Baja California to obtain more affordable medical care, while others prefer the level of attention they received from their Mexican physicians.
‍

Still others travel to Mexico for stem cell therapy, a treatment that has yet to be approved in their own country.  For those unwilling to wait for FDA approval or afraid they will receive a placebo in a blind study, Mexico offers an alternative treatment destination.
‍

Dr. Miguel Osuna Millan is a dentist and currently presides as head of the Health Commission at the Federal Mexican Congress. The congressman spoke of his motivation for crafting the new legislation.
‍

Among the changes introduced by this new legislation are:

Millan is no newcomer to championing the health of Mexican citizens. Because of changes he once proposed, 10 million more Mexicans now have health insurance. Now, he sees stem cells as one more way to help the sick.
‍

“I think that stem cells will become a regular form of treatment first in border cities due to the number of medical tourists, but I do believe that we are on the road to seeing stem cells available to everyone,” he said.
‍

The congressman is especially proud of the fact that umbilical cords that would once have been thrown away can now be used to save lives and that stem cells not being used in Mexico have the potential to save lives in other countries.
‍

“We used the European Union as a model,” he said. “In Spain, there was a surplus of stem cells and tissue that were sent to countries with a deficit of these life-saving resources.”
‍

Dr. Javier Lopez is CEO of Regenerative Medicine Institute, Mexico, in Tijuana. His clinical trial program will be on the front lines of these legislative changes, and he was one of the many physicians asked to weigh in as the new laws were being authored.
‍

“The strength here is that most legislation in the world is created by politicians who are supporting some kind of special interest. Rather than bowing to powers like the pharmaceutical industry, this commission asked health professionals for their advice in order to position patient safety in front of all other interests,” he said.
‍

Robledo commented on commonly held concerns about Mexican medical care. “One of the things foreigners worry about as they consider traveling to Mexico for medical treatment is physician oversight.”
‍

According to Millan and Lopez, this legislation will be one more step toward alleviating those concerns.  “These laws create a legal frame work that allows COFEPRIS to have enough teeth to ensure that all stem cells programs in Mexico meet basic patient safety standards,” Lopez said.
‍

This legislation was made possible only by members of the lower chamber putting politics aside long enough to work together toward a healthier Mexico, Millan said. Not only will Mexicans benefit, but so will the thousands of medical tourists who travel to Mexico every year.
‍

Millan summed it up by adding, “I hope this empowers all states to promote innovation and novel therapies in order to help the greatest number of people get well.”
‍

Dana George is a freelance writer living in the Los Angeles area. In addition to years of newspaper and magazine reporting, George has a number of published novels. She can be reached at george.dana@gmail.com.