By
Joe Harkins
at
Industry News 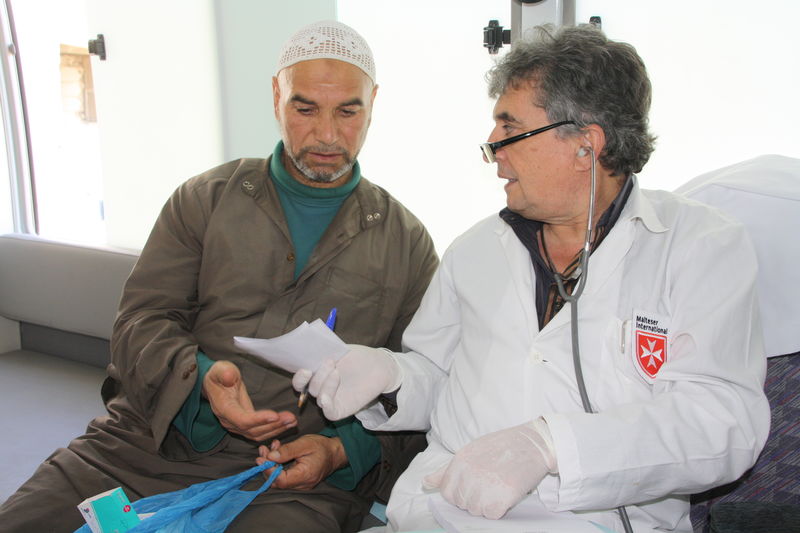 Gratitude betrays the deeper wounds beneath the living tissue transplanted onto her face that, perhaps, even time won't allow this Iraqi mother of three to forget. But, for now, Farah Qasim El-Saad, whose shoulder and jaw were partially blown away on a street in Baghdad a little more than a year ago, says life is much better than what it could have been.
‍

Sitting outside a café near the American University of Beirut Medical Center, El-Saad recalled how doctors there took CT scans to create 3-D images, grafted stem cells from her abdominal fat and repaired contour to the face she had lost to the blast. Cutting-edge medical technology used to treat patients like her is transforming Lebanon for years beset with instability, weak infrastructure and brain drain — into a trusted and respected healthcare provider for the treatment of illnesses endemic in the Arab world.
‍

Mohaned Alsaadi, founder and CEO of Sahara Medical Tourism in Iraq, knows these patients well. Of the 360,000 patients who annually visit Beirut Medical Center, he sends his fair share, and then others more to Jordan, India, Turkey, and Europe for treatments they cannot find in Iraq, where more than a decade of conflict has taken the life out of the beleaguered nation's healthcare system.
‍
‍

We look for high-quality medical care and service at a fair price, said Alsaadi, a speaker at the World Medical Tourism & Global Healthcare Congress, Sept. 24-30, 2015, in Orlando, Fla. We evaluate doctors based on accreditation, their training, patient feedback.

Alsaadi intends to meet some of those providers at the Arab Health and Wellness Summit a featured event at the World Medical Tourism & Global Healthcare Congress — along with others more who may have a vested interest in conflict medicine, a small, but critical niche sector of healthcare that has shown its ugly head in the Middle East amidst the violence and mass migration of refugees to Europe.

Conflict medicine has reached epic demand in parts of the Middle East, but remains no more a focus than neurology, orthopedic, or oncology related conditions that move patients to Alsaadi for solutions to their aliments in more viable parts of the world.
‍

Dr. Fawzi al-Hammouri, chairman of Jordan’s Private Hospitals Association, said more than 250 injured during raids in Yemen were flown into Jordan hospitals earlier this month because emergency services at the site of the conflict were overwhelmed with casualties. Under an agreement struck between private clinics and the Yemeni government, Jordan has been treating many young civilians, women and children, most of whom had bone injuries. Others suffered chest and stomach wounds caused by gunfire, explosions, bombs or burns.
‍

Al-Hammouri, a speaker at the Arab Health and Wellness Summit, said private hospitals in Jordan have responded to the increased demand for services by investing roughly JD2 billion — in facilities, technology and human resources that have underlined the kingdom's reputation as a medical tourism destination and, in the meantime, created 30,000 jobs.
‍

Private hospitals contributed 3.65 percent to Jordan's Gross Domestic Product, in 2014, but war victims now account for a great deal of the suffering. The same is true in Lebanon, where the American University of Beirut Medical Center has treated scores of patients from nearby countries Iraq, Syria, Libya, and Yemen whose healthcare facilities are attempting to withstand current challenges.
‍

Some good news has evolved in even the most pressing of times. The realization that conflict is likely to be a major contributor to the region's medical load for at least the next two decades has spurred the investment in sophisticated technology that will enable doctors in the region to treat some of the severest of cases in the most difficult to reach places.
‍

One of the more enthusiastic developments involves a combination of high-definition cameras and specialized software that potentially will bring care to remote regions and reduce the need for patients to expend critical time traveling to hospitals in the Middle East or nearby countries immediately following an incident or for post-recovery.
‍

Saudi Arabia, which already boasts the largest healthcare market in the GCC and 46 percent of the region's, has hosted roughly 2.5 million Syrians since the refugee crisis emerged in 2011. However, foreigners who seek medical treatment in the Middle East are far from an emerging trend, said Dr. Omar Rajeh Jamal Shalabi, M.D., a division head at Johns Hopkins Aramco Healthcare and speaker at the World Medical Tourism and Global Healthcare Congress who has helped nearly 20 hospitals in the kingdom achieve Joint Commission International accreditation.

Medical tourism patients from Europe as well as other Arab countries have traditionally sought treatment in the Middle East and Gulf Cooperative Council countries, where governments continue to promote private healthcare providers and public-private partnerships.
‍

Population growth, diverse lifestyle related illnesses and the ensuing demand for healthcare services have fueled the appeal of medical tourism in the Gulf region, said Renée-Marie Stephano, President of the Medical Tourism Association. More patients are willing to travel beyond the local doctor to get a second opinion or for aftercare. And more hospitals at destinations like Jordan, Dubai, Abu Dhabi and Saudi Arabia are stepping up their strategies to meet these demands.
‍

Dr. Layla Al Marzouqi, director of the medical tourism initiative for the Dubai Healthcare Authority and a speaker at the Arab Health and Wellness Summit, said hundreds of applications from health professionals interested in working in the United Arab Emirates and the opening of more hospitals and clinics indicates that focused strategies are paying off.
‍

At least this much is true: foreign patients will seek care — cancer, and cardiovascular and orthopedic among other conditions from healthcare providers in the Middle East and GCC, but many new arrivals will be related to injuries. Jalal Fadal Awad found his way to Amman, where he has spent more than a month at Islamic Hospital recovering from severe abdominal injuries suffered during an attack in north Yemen. A welder by trade, the last thing he remembers is a rocket exploding in front of him before losing consciousness. He is surprised to be in Jordan, but just happy to be alive.
‍