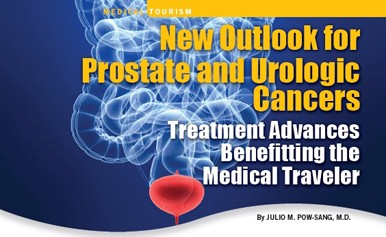 Landmark new therapies for prostate cancer and genitourinary (GU) cancers of the bladder, kidney and testes are giving patients an enormous range of options that weren’t available just a few years ago.

One of the biggest transformations has been in the area of surgery. Minimally invasive robotic-assisted laparoscopic surgery has quickly become the new standard of care, often replacing more traditional open surgery. This expanding technology offers many advantages.
‍

Important benefits from the patient’s point of view include smaller incisions, less blood loss, shorter hospital stay and post-operative recovery that is faster with less pain. For the surgeon, advantages of using a robotic-assisted system are extensive – better view of the anatomy, more flexibility and excellent dexterity to assist in removing difficult-to-reach tumors.
‍

The robotic system is designed to allow the surgeon to sit in a comfortable position at a surgical workstation, while manipulating a laparoscope with robotic arms. The robot functions as an extension of the surgeon’s hands and does the actual work of removing the tumor. Instead of standing at the patient’s side and trying to contort and maneuver the instruments into position, the surgeon can concentrate on the intricate details of the procedure while the robot does the labor.
‍

A tiny camera on the end of the laparoscope features advanced optics, offering three-dimensional (3D) images of the nerves, blood vessels and tissue. The combination of an enhanced visual field and greater dexterity thanks to the robotics may also reduce complications by allowing the surgeon to protect the bundles of nerves on either side of the prostate gland, a “nerve-sparing” technique that helps maintain erectile function after treatment.
‍

While robotic surgery has been performed for more than a decade, much of the focus has been on prostatectomy. Some specialized centers, however, also are using it for partial nephrectomy and for cystectomy to remove the bladder. A partial nephrectomy removes the tumor only, while sparing the remaining healthy tissue in the kidney.
‍

There is strong clinical evidence to support robotic prostatectomy and nephrectomy, but robotic cystectomy is still an evolving technique. At this point, only about less than 10 percent of all cystectomies are done robotically, compared with 80 percent for prostate and about 50 percent for the kidney. Cystectomy is a complex surgery that often involves creating a urinary diversion reconstruction of the bladder. This makes it a much more technically difficult procedure.
‍

Robotics is also used in treating testicular cancer, which primarily affects young men, ages 15 to 34. This is a very treatable cancer with a high cure rate. In a small number of cases, however, the cancer may have spread to the lymph nodes in the abdomen, requiring removal via a procedure called retroperitoneal lymph node dissection.

Most often, this is done as an open surgery with a large incision in the abdomen, but a few centers are using robotics for a more minimally invasive approach with smaller incisions and less trauma to the body.
‍

Beyond Surgery ~ An Array Of Therapeutics

In addition to expanded surgical options through the use of robotics, patients with prostate and other GU cancers are benefitting from the discovery of new and better medications that show much promise.
‍

Hormone therapy, more correctly defined as androgen deprivation therapy, continues to be a standard treatment to block testosterone and other male androgen hormones from fueling the growth of prostate cancer. It effectively starves the tumor. Hormone therapy can put the cancer into remission, but it is not curative. Many patients eventually become resistant to the therapy’s effect, which renders treatment ineffective and allows the cancer to progress.
‍

Until five years ago, there were few other options when hormone therapy failed. Now two new chemotherapy drugs – docetaxel (Taxotere) and cabazitaxel (Jevtana) – have been shown to extend life expectancy in men with recurrent or advanced stage disease.
‍

Docetaxel has been used for several years as a primary chemotherapy agent for hormone-resistant prostate cancer. Cabazitaxel received U.S. Food and Drug Administration (FDA) approval in June of 2010 for second-line use in men who have already been treated with docetaxel.
‍

Even more recently, a new hormone therapy has been introduced for men with late-stage prostate cancer who have failed other treatment options. The FDA approved the use of abiraterone (Zytiga) in April of 2011. Abiraterone is different from previously used hormone therapy in that it stops production of male hormones not just from the testes, but also at various sites throughout the body, making it potentially even more effective.
‍

Molecular therapy is another area that is making a difference for prostate and GU cancers. This type of therapy uses specially designed therapeutic agents to stop the cancer by inhibiting cell division and growth or by inhibiting formation of new blood vessels that “feed” the cancer cells. Clinical trials are underway at select cancer centers in the U.S. for advanced bladder and prostate cancers.
‍

In addition, a number of therapeutic agents have been approved for use in patients with advanced kidney cancer. These include sorafenib (Nexavar), sunitinib (Sutent), temsirolimus (Torisel), everolimus (Afinitor, Zortress) and pazopanib (Votrient).
‍

For the first time, a vaccine that boosts the immune system and enhances its ability to fight the malignancy has been introduced for prostate cancer. Provenge (sipuleucel-T) received FDA approval in 2010 to help fight advanced prostate cancer.

This is not a traditional preventive vaccine, but rather a type of immunotherapy designed to strengthen the body’s natural defenses against cancer. The patient’s own immune cells are combined with a genetically engineered immunotherapy agent. The vaccine is then injected into the body to aid the immune system in seeking and attacking the cancer cells.
‍

Advances in the field of radiation therapy are changing the future of treatment for prostate and GU cancers. New technology makes it possible to dramatically increase the dose of radiation to improve long-term outcome, while shielding healthy tissue in the bladder and rectum from harm.
‍

Newer treatments are very focused with small, precise margins for greater accuracy. Think of the effect of a flashlight, which scatters the light in a dark room, compared to a spotlight, which can concentrate the light on a single object.
‍

Intensity-modulated radiation therapy treatments (IMRT) control the beam delivery by varying or modulating the radiation dose to different parts of the tumor. Higher doses can concentrate in the center of the tumor, with a lower dose to the outside margins that are closest to healthy tissue.
‍

Many centers are using IMRT with 3D computed tomography (CT) imaging for the most accurate beam placement. With CT guidance, the beam is aligned with the patient’s internal anatomy rather than relying on the more traditional external marker placed on the outside of the body. Careful attention to proper positioning ensures that the beam is placed on target every single time – sparing healthy tissue from radiation exposure.
‍

Stereotactic radiation therapy is yet another emerging radiation modality, one that has been compared to radiosurgery because of the ability of the physician to precisely sculpt or shape the beam, as well as change the intensity and angle.
‍

‍
Not all radiation is delivered externally. Some patients with prostate or GU cancers may undergo brachytherapy, which delivers radiation internally directly to the tumor site. Brachytherapy can be performed as a stand-alone treatment or in combination with external radiation therapy.
‍

There are primarily two types of brachytherapy. A low-dose radioactive seed can be permanently implanted in the prostate to continuously emit radiation over time. Or, a small, needle-like device can be temporarily placed inside the prostate to deliver two or three high-dose treatments. It’s like a flash of radiation or an internal blast.
‍

New Alternatives to Surgery or Radiation

Two innovative minimally invasive treatments – cryosurgery and high-intensity focused ultrasound – now are offered by some specialized cancer centers in the U.S. for patients with prostate cancer.

‍
Cryosurgery is an alternative to surgery or radiation in treating some men with early-stage prostate cancer. It uses freezing temperatures to destroy the cancer cells through the formation of ice crystals. During the procedure, small probes are inserted into the prostate under ultrasound guidance to ensure correct placement.

Sensors are placed internally to monitor the temperature of the tissue. The prostate is then gradually frozen while the urethra is protected with a warming catheter. Several periods of freezing and thawing of the prostate take place to ensure maximum effectiveness of treatment.
‍

The treatment currently is used in Europe, Canada and South America, and undergoing FDA trials in the U.S. While only select U.S. centers now offer the treatment as part of a clinical study, HIFU is expected to be approved for prostate cancer treatment by the FDA within the next year or two.
‍

A Checklist for Patients

Making the right treatment decisions can be challenging. There are pros and cons for each type of therapy. The patient’s age, lifestyle and expectations for quality of life, as well as tumor stage and location are all factors to consider. Compare treatment options by asking about potential complications, the safety record for the particular treatment, and statistics regarding cure rate.
‍

It is equally important to inquire about the facility where the treatment is offered. What type of advanced technology, cutting-edge treatments and clinical trials are offered? Are the physicians fellowship-trained specialists in their field? Does the center meet national criteria for attaining a certain threshold of cases performed? Checking the experience level of the facility and the physicians can be an important measurement of quality of care.
‍

Patients should also consider the value of obtaining care at a cancer center where treatment plans are developed by a multidisciplinary team of specialists in every modality, from surgery and medical oncology to radiation therapy and diagnostics. This type of collaboration and consensus will ensure that expert opinions from many different perspectives will contribute to the best and most appropriate care plan for each patient.
‍

Julio M. Pow-Sang, M.D., is chairman of the Department of Genitourinary Oncology, chief of Surgery Services at Moffitt Cancer Center in Tampa, Fla., U.S.A., and director of the Moffitt Robotics Program. He has been a urological oncology surgeon for more than 20 years.
‍

The Department of Genitourinary Oncology at Moffitt Cancer Center fosters an interdisciplinary approach to treating GU malignancies, which include cancers of the male and female urinary systems, including the prostate, testicles, penis, kidney, ureters and bladder. Physician-scientists participate in cutting-edge translational phase I and II Moffitt-initiated and national clinical research trials.

Dr. Pow-Sang has a special interest in research involving molecular markers for prostate cancer and epigenetic changes affecting the prostate. In addition, he is studying nutritional supplements such as green tea, vitamin E and soy that may have an impact on premalignant changes in the prostate.
‍

A National Cancer Institute-designated Comprehensive Cancer Center, Moffitt treats patients from throughout the U.S. and internationally. The center is a leader in advancing personalized cancer care, an approach that seeks to tailor therapies to the biology of each patient’s disease.
‍

Moffitt Total Cancer Care™, a project to create one of the largest cancer tumor databases in the country, is furthering the understanding of personalized medicine and helping design more targeted cancer treatments to improve outcomes, reduce toxicity, prevent recurrence and preserve quality of life.