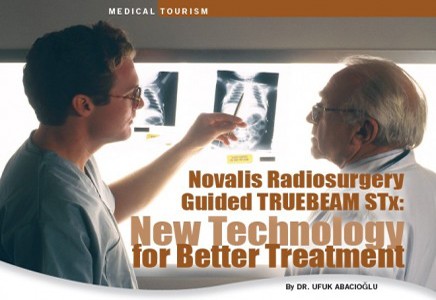 As a local and organ-preserving method, radiation oncology as a discipline is changing its paradigm to more sophisticated, precise treatments rather than large field irradiations. A radiation beam is more like a scalpel in the era of hypofractionated and ablative doses.

It becomes increasingly possible to escalate the fractional and total doses without increasing toxicity; toxicity may even decrease. While early clinical results with these new technologies are very satisfactory, evidence-based long term results are anticipated.
‍

Radiation oncology is an important part of the standard of care for many tumours. Recent technological advances have enhanced our targeting accuracy, thereby reducing unnecessary, so far normal tissue doses.

New technologies have also provided the possibility to shorten the fractional and overall treatment times, which is an improvement regarding patient comfort and quality of life. Integration of systemic and targeted therapies with novel radiotherapy technologies is investigated for their synergistic interactions.
‍

TrueBeam linear accelerator is the latest technology developed by the U.S. company Varian Medical Systems, Inc., which is the world’s leader in manufacturing radiotherapy, radiosurgery, proton therapy and brachytherapy equipment. The first clinical treatment in the world that used this technology was performed in March 2010.
‍

Since dose rate can be increased up to eight fold compared to other linear accelerators, it can perform RapidArc more rapidly. Its difference from all other technologies is that it can give a higher dose in a shorter time by its ability to increase to high dose and thus provide high performance treatment processes, reducing the duration and number of sessions with this feature.

Some complex radiosurgery and stereotactic radiotherapy treatments may necessitate the patient to lie on the treatment couch for up to 1-2 hours. With TrueBeam, the regular time slot of conventional radiotherapy which is 15 minutes is usually the time needed including positioning, image guidance, positional correction and treatment.

So a precise treatment may also be very comfortable for the patient. This is possible with the unflattened beam which can have a dose rate up to four times more than other linear accelerators.
‍

With the limited margins it is also possible to increase the dose per fraction, which further enables the clinician to decrease the overall treatment time. Recent studies are trying to disseminate this strategy to many different cancers in the body.
‍

One of its most important differences is that it can perform irradiation better hitting the targeted treatment focus by its ability to take high-resolution images. Novalis Radiosurgery guided TrueBeam STx radiotherapy can be used for treatment of all cancer types requiring radiotherapy.

However, it especially makes a big difference in treatment of cancers in the brain, lung, breast, prostate and spinal region. In addition, Novalis Radiosurgery Guided TrueBeam STx system provides “Gated” RapidArc technology that considers tumor movement and compensates it by synchronizing dosing and imaging spinning continuously around the patient.
‍

Effects on medical tourism in Turkey

Truebeam technology is very new for the Turkish medical tourism industry and the Neolife Medical Center is the first to bring this unique technology to Turkey. Day by day, it is becoming more and more well-known by healthcare professionals and patients in Turkey and surrounding countries. We have started to increase the number of foreign patients that choose to get service at Neolife after installation of the TrueBeam device to our center.
‍

Monthly we receive over 30 international patients from other countries just for TrueBeam. Most of them are from Balkan countries such as Bulgaria, Romania, Moldova, Macedonia, Albania and Kosovo. We also receive many patients from Ukraine, Iraq, Azerbaijan,Georgia and some Arabic Countries.
‍

Dr. Abacioglu is currently the Head of the Department of Radiation Oncology at Neolife Medical Center in Istanbul Turkey and one of the first clinical users of Novalis Radiosurgery Guided TrueBeam STx in the world.

He authored or co-authored 70 peer-reviewed articles, 190 meeting abstracts, and 5 book chapters. He has 55 invited speakerships. He has conducted or has been involved in more than 40 national and international studies.