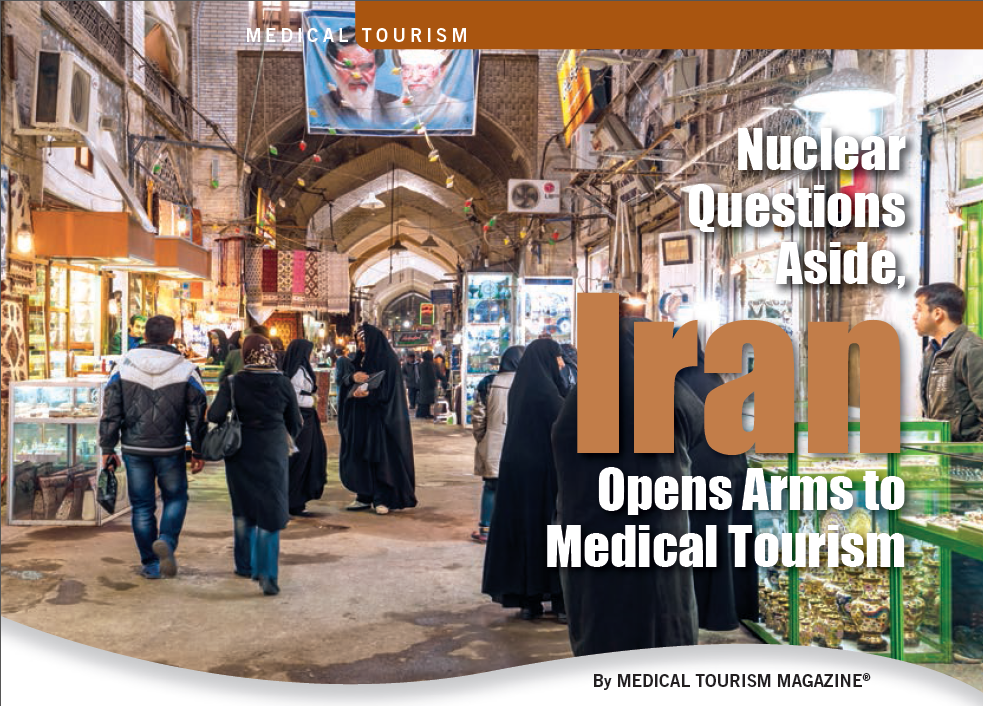 As world powers cautiously announced the completion of an interim deal to curtail Iran’s nuclear ambitions, Tehran welcomed medical tourism patients with open arms. Officials in Iran say plans are under way to market medical tourism, improving on the 85,000 patients the nation says it treats each year. Mohammad Ali Najafi, vice president and head of Cultural Heritage Organization, said efforts will concentrate on promoting treatment facilities on the internet and in catalogs, brochures, compact discs, and maps to be distributed at health and tourism events.

We perform all modern eye surgeries offered anywhere else in the world with more competitive prices usually several times less,” Dr. Khorsro Heydari, director of the Noor hospital where a new clinic was opened, told the Iran PressTV. “We enjoy competent surgeons and up-to-date equipment. Some of our surgeons are renowned worldwide. We have enjoyed over 10,500 patients from outside of Iran coming to our hospital since its start.”
‍

Iranians have traditionally travelled to foreign nations for care, especially nearby Turkey, but Najafi believes not only this trend can be reversed, but Iran can begin to lure patients from abroad, in part, because of its natural resources, cultural attractions and geographic location.
‍

The government has announced plans for a number of infrastructure projects — including hotels at the Dizin ski resort in the Alborz mountain range — to keep up with what it says “the demands of an influx of foreign travelers.” Iranian statistics report the number of international tourists to the country reached 3 million in 2011, and contributed $2 billion to the nation’s economy. Iran President Hassan Rouhani hopes up that number and attract 10 million tourists annually.
‍

“There’s a new attitude for cultural visitors to come visit Iran,” Rahnani Movahhed, deputy of Iranian Tourism Organization, told the Tehran Times. “For example, this holiday, over 200 European groups spent Christmas in Iran. This is a change from the past.”
‍

The flurry of activity doesn’t mean that even the most naïve traveler is about to confuse an Iranian winter with spring in Paris anytime soon. But, a perceived ease in hostility between western nations and Iran has created a renewed interest in the Islamic Republic, largely estranged from the United States since 1979, when Iranian revolutionaries seized the U.S. embassy in Tehran and held 52 Americans hostage for more than a year and a half.
‍

The flurry of activity doesn’t mean that even the most naïve traveler is about to confuse an Iranian winter with spring in Paris anytime soon.
‍

Despite economic sanctions, the U.S. government has never blocked travel to Iran the way it has restrained travel to Cuba. However, in a warning updated Nov. 21, the U.S.
‍

State Department warned Americans to “carefully consider the risks of travel to Iran” and noted Iranian officials have detained or imprisoned some American citizens on various charges including espionage.
‍

In light of the warning, U.S.-based tour operators told the L.A. Times that they’ve actually witnessed a surge in bookings and questions about Iran since Rouhani visited New York in September.
‍

Janet Moore, owner of Distant Horizons in Long Beach, Calif., said she arranged Iranian trips for 50-60 U.S. travelers in 2013. This year, she expects that number to be at least 250 people including three trips in connection with the World Affairs Council of Philadelphia and one with the San Francisco-based Commonwealth Club of California.

She said in 2015 there will be even more because university groups including the University of California and Stanford have already booked departures.
‍

GeoEx has been arranging travel to Iran since the early 1990s and brought 50-60 Americans there in 2013. Jean- Paul Tennant, CEO of the San Francisco-based agency, said he’s hoping to double traffic to Iran this year.

GeoEx travelers have returned “raving about the warmth and openness of the Iranian people. Of all the places we at GeoEx send our clients, Iran stands out as the one with the biggest gap between pre-trip perceptions and on-the-ground reality,” said Tennant.
‍

At Seattle-based Caravan-Serai Tours, owner Rita Zawaideh said she and other U.S. operators met with Iranian tourism officials in September in New York and were encouraged by the exchange.
‍

“We in Iran should take the first step in persuading westerners that they should have no fear in coming to Iran,” Najafi told the Guardian.
‍

Further thaw in relations will have a foundation in the U.S.- Iranian nuclear agreement, which will provide Tehran with some relief from Western economic sanctions in return for a suspension of certain nuclear activities for six months.
‍

“This is the first step toward a cease-fire,” Rasoul Sanaeirad, a political assistant to the Revolutionary Guards, told the semiofficial Fars news agency. “It seems the Americans are determined to overcome the atmosphere of conflict.”
‍

The agreement was reached after seven weeks of negotiations over details on how to put in place the compromises in principle outlined in November by Iran and the so-called P5-plus-1, the five permanent members of the U.N. Security Council and Germany.
‍

According to the Obama administration, Iran will get around $7 billion in sanctions relief that will be doled out over the length of the pact. In exchange, Iran will comply with measures that the United States says will roll back its nuclear program. Critics, like Israel, contend the nuclear pact doesn’t require enough Iranian concessions. Iran maintains that its nuclear steps are part of energy development, not weaponry.
‍

Before the end of last year, the Atomic Energy Organization of Iran announced plans to build a specialized radiotherapy hospital through a joint venture with Bank Pasargrad, a major private Iranian banking establishment, at a cost of $403 million.

Iran has been largely estranged from the United States since 1979, when revolutionaries seized the U.S. Embassy in Tehran and held 52 Americans hostage for one year and a half.
‍

Issues for American travelers who disagree with Iran’s theocracy might go beyond the nuclear question: Is there value to person-to-person contact for visiting tourists?

Does that matter more than the money a traveler will contribute to the Iranian regime?
‍

Known widely as Persia until the 1930s, Iran has 16 sites listed on Unesco’s World Heritage list.

Top attractions include the city of Isfahan and the pre-Christian ruins of Persepolis, near Shiraz – both relatively far from Iraq and Afghanistan border zones, which the U.S. State Department urges travelers to avoid.

Although direct flights between the United States and Iran haven’t been offered since 1979, Rouhani said he would explore possibilities. In the meantime, many travelers fly Turkish Airlines to Istanbul, then Istanbul to Tehran or Isfahan.