Obamacare: Will What You Know and Don't Know Hurt You? 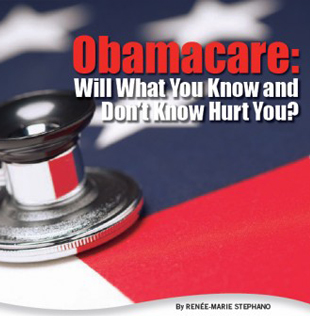 Even three years after its implementation, more than half of all Americans are unaware it is now the law of the land. According to results of a Kaiser Family Foundation non-partisan study, 42 percent – or four in 10 Americans – even know the much maligned law is in place.

What’s more, 12 percent believe Congress repealed the law and another 7 percent say the Supreme Court overturned what is seemingly known to just a few as the Patient Protection and Affordable Care Act (PPACA).
‍

Perhaps, more telling is that 23 percent claimed to not know enough to say what the status of the law is, which is representative of the state of confusion that is Obamacare today. Nobody expected Obamacare to get a free ride through Congress and onto the president’s desk for his signature – and it didn’t. Implementation faced divided support from the start and things have gotten worst since its passage in 2010.
‍

Public opinion of PPACA, according to Kaiser, is at its second-lowest level in the past two years. Less than half – 35 percent – view Obamacare favorably while 40 percent claim to be opposed to the idea; this, despite even the president’s best intentions to prove otherwise.

Regardless, Obamacare, which requires most people to have health insurance beginning in 2014, is here – at least for now. Wherever it goes is anyone’s guess. Although most – from healthcare providers to policymakers on both sides of the aisle – believe the ride will be a bumpy one. One of the authors of the law went so far as to see a “huge train wreck” on the horizon.
‍

One of the authors of the law went so far as to see a ‘huge train wreck’ on the horizon.

So how do insurance companies, small business owners and healthcare systems avoid the anticipated debris along the way? When the path ahead is unclear and complex, perhaps, the best course of action is to take a deep breath and do nothing. Sit back and let the road map out itself. That said, Obama care is likely to remain as difficult to understand as it is to explain.
‍

Meanwhile, the Department of Health and Human Services has already begun to issue new applications for individuals and adults looking to get health insurance for 2014 coverage. Many of these same people who did not know Obamacare was law, can hardly be expected to understand the nuances of selecting insurance, either, or how to resolve problems when health claims are denied or where to seek help.
‍

How much this insurance might cost individuals may take months to ascertain. That has not and will not stop marketplace experts from making predictions about sticker shock, a key aspect to determining the success of Obamacare at any level.
‍

The latest opinion came in the form of a study published by the Society of Actuaries, which predicted, thanks to sicker patients who were previously uninsured now joining an expanding coverage pool, medical rates for everyone will increase substantially next year.
‍

That fear has many insurance companies scrambling to find ways to mitigate these anticipated increases under the new health law. Determining the number of patients who will be affected by Obamacare is even harder. Higher premiums may be just the beginning and those policies without increases may be restricted in terms of doctors and hospital networks.

If dire forecasts from the Congressional Budget Office in 2012 hold true, some three million Americans will lose their health insurance altogether because they will not be able to afford coverage.
‍

More surprises may lie ahead and Americans may start looking around, both domestically and internationally, for fast, affordable treatments for all sorts of medical conditions that they can’t find down the street.

All this bodes well for medical tourism. The industry is primed to come to the rescue, now more than ever. Rising costs in the United States, an aging and affluent population in need of immediate care, and the expansion of technology and state-of- the-art facilities to even the furthest outposts of the world have made medical tourism a cost-effective proposition for all stakeholders – patients, employers, insurance companies, and healthcare providers — to consider.
‍

Throw in the perks of travel and sightseeing — from exotic beaches and ancient ruins to modern landmarks and cosmopolitan cities – and medical tourism is becoming, for even the most skeptical patient, a health alternative to Obamacare and the unpredictability that healthcare reform may or may
not bring.
‍

Renée-Marie Stephano is the president and co-founder of the Medical Tourism Association® and editor-in-chief of Medical Tourism Magazine™ and the Health and Wellness Destination Guide series of books. Ms. Stephano has authored several books from “Developing International Patient Centers, Best Practices in Facilitation,” to “Medical Tourism for Insurers and Employers,” and the most recent, “Engaging Wellness.”
‍

Ms. Stephano is an attorney and specializes in working with governments and hospitals to develop sustainable medical tourism/international patient programs and strategies including the development of healthcare clusters, and international patient departments on long-term plans. Ms. Stephano works with ministers of health, tourism and economic Development in developing public-private partnerships to support medical tourism and, at the same time, to provide a benefit and return to the local community.
‍

She organizes one of the only ministerial summits that brings together ministers of health, tourism and economic development every year. She has helped assess the feasibility and opportunities of international programs for both the United States and international hospitals, cities and countries with international expansion, clinical development and affiliations and partnerships. She also consults governments in the development of sustainable medical tourism zones and free healthcare zones.

Ms. Stephano has co-authored the books “Medical Tourism: An International Healthcare Guide for Insurers, Employers and Governments” and “Engaging Wellness ~ Corporate Wellness Programs that Work.” She is a keynote speaker at international conferences and has spoken at hundreds of events and has been featured and mentioned in media publications around the world.
‍

Ms. Stephano serves on the Board of Directors for the International Healthcare Research Center, a 501c3, nonprofit medical tourism research center, the Corporate Health & Wellness Association, and two Washington, D.C.-based groups focused on lobbying the U.S. Congress for the benefits of Medicare reimbursement overseas and the support of U.S. hospitals in their overseas initiatives.
‍