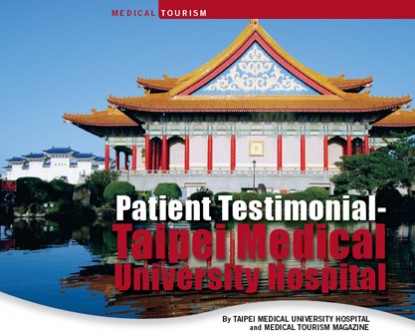 Jack, a 68-year-old retiree and California resident traveled 6,200 miles to Taipei Medical University Hospital (TMUH) to undergo a total knee replacement that doctors had advised him to have 25 years ago. Due to worsening conditions of his knee he decided he couldn’t take the pain any longer, but he couldn’t afford the surgery either.

Jack used to work as a quality inspector for one of the world’s largest pipeline work companies. His job required him to work long hours, constantly move from place to place, climbing up and down ladders. He decided to retire 13 years ago as the knee injury he had sustained from playing football in high school began to impact his physical agility and cause unbearable pain.

Due to the worsening conditions of his knee, many outings with families were missed, depriving him of spending time with his children, and especially his grandchildren. His quality of life had deteriorated extensively.

Due to insurance regulations, Jack was obliged to pay for the entire expenses incurred from the total knee replacement surgery, the cost of which would range from $55,000 to $65,000 in the United States. Jack began searching for alternative medical institutions outside the country.

“I started out looking up “joint replacement surgery” on Google, and picked one of the medical tourism sites and it featured TMUH,” said Jack. “I was VERY impressed with their facility, credentials, their International V.I.P. ward and I was even more impressed with Dr. Lee,” added Jack.
‍

Sixteen years after the university’s foundation, the Taipei Medical University Hospital was established in 1976, since then it has expanded to a capacity of 900 beds, receiving the ISO-9002 certification in January 1997 and becoming JCI-accredited in 2009.

In addition to its credibility, Jack was drawn to the facility by Chief of the Department of Orthopedic Surgery, Dr. Chian-Her Lee, a prominent specialist in degenerative arthritis and knee and hip replacements surgeries, among many other specialties.
‍

After researching the facility, he researched the costs of the surgery, flight, transportation and accommodation.
‍

After all of his research he started making phone calls to arrange this medical trip.
‍

“Upon contacting TMUH, I was directed to Steven Chen who is in charge of scheduling for the V.I.P. ward. He handled all of the communication with the doctor and surgical team, set up all of my appointments, made all of the arrangements, met me at the airport and was there for me everyday!

The only thing I had to deal with was the flight scheduling, it was very nice and everything fell into place,” Jack exclaimed.
‍

Jack did pause for a moment when his wife decided that she was just to terrified to fly and was too concerned for him to go alone. But he knew that this was the only way he would be able to have the surgery, and started looking at it as the money he saved was money earned.
‍

“Looking at it that way made it easier to gather my courage to get on the plane and go get it done!”
‍

Since the first correspondence with TMUH, Jack became increasingly reassured and confident, even though his plan was often met with skepticism by his friends and some of his family members, except his wife who supported his decisions. On December 5, he arrived in Taiwan.
‍

“I was met at the Taipei airport Monday night at 8:30 p.m. by TMUH staff and driven directly to the hospital to be checked in and made comfortable. The next day, I had five pre-op appointments that I was escorted to and was taken into with no waiting!!

After the appointments I was taken back to my room by staff and was never left alone to try and find my way back. Tuesday afternoon after my test results were in, Dr. Lee came to my room to discuss the surgery and explain the procedure in detail to me, which was very reassuring.

The next day it was time to prep for surgery at 7:00 am. When I came out of recovery there was a volunteer translator that stayed with me 24 hours a day for six days to help me with anything that I needed and to make sure there was no miscommunication.

The following Monday they released me to a dorm room to finish rehab. I rented a university V.I.P. dorm room, which was large and spacious, in a secured area accessible only with a pass card.  The room had a king size bed, big screen T.V., a great view and Wi-Fi access. It was very comfortable.”
‍

Understanding the challenges that may have arisen from culture, language and environment, TMUH arranged for an interpreter to accompany Jack at all times to ensure no communication was lost and that his needs were accommodated.

When Jack had recovered enough to be able to walk for certain lengths of time, the TMUH staff took him for walks around the hospital’s surrounding neighborhood, showing him aspects of the local life, as well as taking him further to some of the more well-known sightseeing spots. “The staff was very accommodating; they took me sightseeing and shopping for souvenirs, and even shipped them home for me!”
‍

“The whole experience was very good, but for sure the cleanliness and efficiency of TMUH was a definite plus. I would absolutely recommend this to anyone, especially if they are in the same position that I was in.”