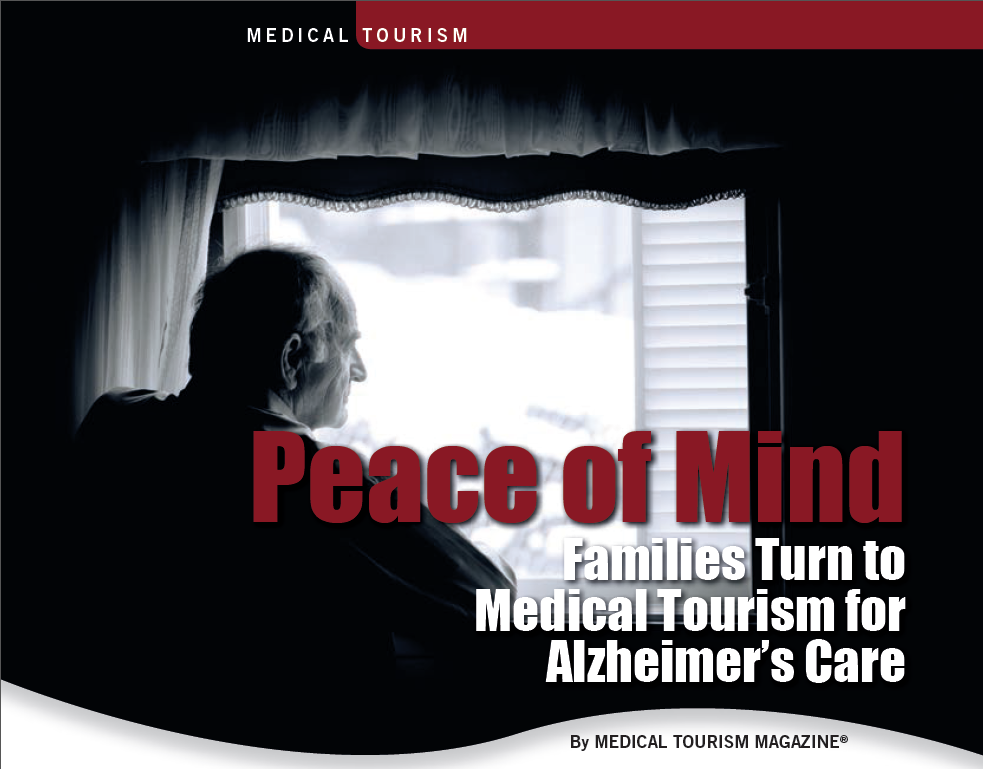 As an artist who fancied in delicate oils, Susanna Kuratli paints a different picture these days as she swims laps in a pool ringed by palm trees and wind chimes. She is neither out of sight nor mind to her husband, Ulrich, who must make a heartrending decision to either leave his wife of 41 years in Thailand, at a facility 5,600 miles from home, or bring her back to Switzerland.

Developing nations like Thailand are poised to attract medical tourism patients like Susanna Kuralti who suffer from Alzheimer’s to similar facilities that offer inexpensive and, to some, better care for those debilitated by long-term memory loss while providing peace of mind to their families who are concerned about their well-being.
‍

“Sometimes I am jealous,” Ulrich Kuratli told Associated Press as he watched residents of the Baan Khamlanghai care center in northern Thailand toss around a ball under a cascade of water. “My wife won’t take my hand, but when her Thai (caregiver) takes it, she is calm. She seems to be happy. When she sees me, she starts to cry. Maybe she remembers how we were and understands, but can no longer find the words.”
‍

As the number of patients with Alzheimer’s increase and the corresponding cost to care for them escalates, spouses and relatives in Western nations are finding themselves in situations similar to that of Kuratli. The retirement facility in Chiang Mai is strengthening Thailand’s position as a leading medical tourism destination. A second $10 million holiday-like home for Alzheimer’s patients is scheduled to open by the end of this year in Thailand along with another retirement facility set on the grounds of a former four-star hotel.
‍

The nascent trend is unnerving to some experts who say uprooting people with Alzheimer’s will add to their sense of displacement and anxiety. Others say quality of care is more important than location. There’s also some general uneasiness about sending ailing elderly people abroad.
‍

Germany is already sending several thousand Alzheimer’s patients, as well as the aged and otherwise ill, to Eastern Europe, Spain, Greece and Ukraine. Patients are even moving from Switzerland, ranked No. 1 in healthcare for the elderly this year in an index compiled by the elderly advocacy group HelpAge International and the U.N. Population Fund.
‍

The Philippines is offering Americans care for $1,500 to $3,500 a month. In comparison, the American Elder Care Research Organization says the average monthly bill for a private room in a skilled nursing facility in the United States is $6,900.
‍

About 100 Americans are seeking care in the Philippines, but more facilities are being built and a marketing campaign will be launched in 2014, J.J. Reyes, who is planning a retirement community near Manila, told Associated Press.
‍

“Populations are aging rapidly and the accompanying strain on health, welfare and insurance systems will put mounting pressure on government budgets worldwide,” said Renée-Marie Stephano, president of the Medical Tourism Association®. “Sooner, rather than later, medical tourism to foreign countries will been seen as a viable option to families seeking low-cost retirement housing for their loved ones who they no longer have the physical nor financial means to care for themselves.”
‍

The World Health Organization reports people above the age of 60 worldwide will more than triple between 2000 and 2050 to 2 billion. About 44 million patients suffer from Alzheimer’s globally, and the figure is projected to triple to 135 million by 2050. The Alzheimer’s Association estimates that in the United States alone, the disease will cost $203 billion this year and soar to $1.2 trillion by 2050.
‍

Baan Kamlangchay was established by Martin Woodtli, a psychologist and social worker who spent four years in Thailand with the group Doctors Without Borders before returning home to Switzerland to care for his Alzheimer’sdiagnosed mother.
‍

Wanting to return to Thailand and knowing that Thais regard the elderly with great respect, he brought his mother to Chiang Mai, where she became the home’s first “guest.” Over the next decade, the 52-year-old Woodtli purchased or rented eight two-story houses where 13 Swiss and German patients now reside. Two people normally share the modest, but well-kept, fully furnished houses, each sleeping in a separate bedroom along with their caretaker.
‍

Over the next decade, the 52-year-old Woodtli purchased or rented eight two-story houses where 13 Swiss and German patients now reside. Two people normally share the modest, but well-kept, fully furnished houses, each sleeping in a separate bedroom along with their caretaker.
‍

Breakfast and lunch are eaten together at another residence where Woodtli, his wife and son live. On most afternoons, the group gathers at a private, walled park to swim, snack and relax on deck chairs. Regular outside activities are organized because Woodtli believes the stimuli may help delay degeneration.
‍

“Movement is important,” he said. “Tensions are also relieved if they have freedom to move. Our (caregivers) allow our guests a lot of space as long as it does not pose a danger to them. In Switzerland we don’t have opportunity for such care.” Woodtli said he has received criticism about “the Swiss starting to export their social problems.” The German media have described shifting the aged and ailing abroad as “grandmother export.”
‍

Sabine Jansen, director of Germany’s Alzheimer’s Society, said that while some with Alzheimer’s may adjust to an alien place, most find it difficult because they live in a world of earlier memories.
‍

“People with dementia should stay in their familiar environment as long as possible,” she said. “They are better oriented in their own living places and communities. Friends, family members, neighbors can visit them. Also because of language and cultural reasons, it is best for most to stay in their home country.”
‍

Angela Lunde, a dementia education specialist at the Mayo Clinic in Rochester, Minn., said that the afflicted do better in a familiar environment, but that in time even those with advanced stages of the disease can adjust well.
‍

Qualified nurses and facilities are struggling to keep pace with the growing number of Alzheimer’s patients. Ulrich Kuratli said his homeland, Switzerland, treats the elderly as well as any nation on Earth, but the care in Thailand is not only less expensive, but more personal. In Switzerland, “You have a cold, old lady who gives you pills and tells you to go to bed,” he said.
‍

Kuratli and his three grown children have given themselves six months to decide while the retired software developer lives alongside his 65-year-old wife in Baan Kamlangchay — “Home for Care from the Heart.”
‍

Patients live in individual houses within a Thai community, are taken to local markets, temples and restaurants, each with three caretakers working in rotation to provide personal round-the-clock care. The monthly $3,800 cost is a third of what basic institutional care amounts to in Switzerland.
‍

Kuratli is not yet sure how he’ll care for Susanna, who used to produce a popular annual calendar of her paintings. But, he’s leaning toward keeping her in Thailand, possibly for the rest of her life.