Peculiarities of Medical Tourism in a Russian-Speaking Market 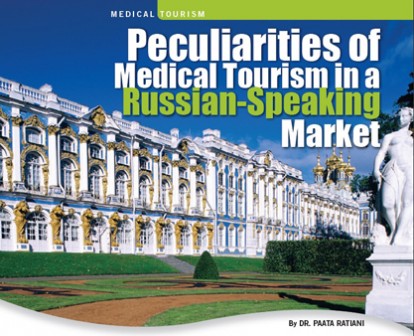 A bit more than 20 years ago, the Soviet Union, a country which occupied 1/6 of the world territory had a population of over 300 million. The healthcare system was strictly centralized in the country and formally each citizen could get full medical service absolutely free of charge. Salaries of doctors and medical personnel were low, however they were one of the wealthiest citizens as they received informal income from their patients and enjoyed a good civil reputation and much trust among the public. Despite the fallacious financial relations and corruption, any citizen could get necessary medical service from the state.

In 1992 the Soviet Union collapsed resulting into 15 new independent states. In 1990s there was chaos in all major areas of social life. The mentality of the Soviet person gradually disappeared and we ended up with post-Soviet communities. The healthcare system and universal public medical insurance ruined together with the Soviet Union.

Medical institutions basically changed to self-financing when there was no private insurance system.  The established culture of relations between a doctor and a patient was destroyed. Solvency of patients decreased and lots of hospitals and doctors went bankrupt.

The Russian-speaking market for medical tourism

Thinking about the Soviet healthcare system and about what happened after its collapse is an indispensable condition to define the present Russian speaking medical tourism market (patients and their relatives) and what their requirements/expectations are from treatment abroad.
‍

Currently, standards of medical services in these countries, insurance systems, participation of private and state sectors is different. However, they are all united under one feature – they are post-Soviet communities (with post-Soviet patients and doctors) having the respective mentality and healthcare systems under reforms, meaning that forms of solid relations and attitudes have not been established yet.

The middle class is weak and solvency is rather low. However, the elite have emerged in these communities which make up the portion of those who go abroad for treatment.
‍

A Russian-speaking market is different from all other markets in the world having the experience of the past 20 years. It remembers the “Highest Standard Soviet Medicine (where the healthiest patients lived)”; at the same time it is dissatisfied of the present service quality and has lost trust to medical personnel.

It is extremely demanding and pretentious, always looks for the best offer, for the most comfortable and convenient conditions and has good opportunities for choice. The Russian-speaking  market for medical tourism is among the most competitive markets in the world.
‍

It is significant that at present this market is not homogenous as it used to be in the Soviet period. There are different political regimes and methods of approach that vary respectively.
‍

In general, the main product of the medical tourism company is a “medical tour” – as medical/diagnostic (referring to patients and their companions), as educational (referring to medical personnel and medical students of any category) as well.
‍

The basic products also include distant consultations for patients (without going abroad) – so called “Second Opinion”, which can be in written form or a T.V. consultation. The latter is connected with the development of telemedicine, which is an important topic to be discussed in the future in the general global healthcare viewpoint.
‍

Mainly used types of marketing are: internet marketing and exclusive partnership with patient provider sources. At the next stage it is possible to establish a VIP providers club and finally, formulation of centers with a large variety of services in the largest centers of the Russian-speaking market.
‍

The importance of Russian language and mentality:

The language issue is very important in a medical tourism business. However, it is not only the knowledge of the language, but also the knowledge and understanding of this market and the patient’s mentality that matters. Russian is still the basic spoken language for the huge Russian Federation and post-Soviet countries.

However, there are countries, e.g. Caucasian countries, where new generations and residents of provinces don’t speak Russian. In this case it is necessary to provide translators who speak their mother languages on-site. It is also essential to create a native environment for the customers from the moment of receiving applications.

Telephone conversations can be held in Russian if needed to specify the details. It is very important to have a Russian-speaking person in the company for socializing with patients and their companions and establishing an effective collaboration with partner provider sources.

Documents (offer, visa invitation, medical and financial report) can be prepared in English as the official language of the medical tourism business but definitions in Russian are also necessary. Some documents and contracts with the sources, ministries and insurance companies will be made in Russian.

Knowledge of Russian language and mentality increases the number of implemented cases and satisfaction of newly arrived patients and their companions with services, which is the best means for marketing.
‍

As excellent knowledge of Russian language and mentality in not-Russian and not-post-Soviet people is very rare, the players who intend to work in the Russian market should better use cadres from this space.
‍

Contract on cooperation can be concluded by patients’ provider/source with any interested clinic or company. At the end of every year two basic statistic indicators are checked: 1. Number of incoming applications and 2. Percentage of implemented (realized) patient cases.

In case the number of applications or percentage of implemented cases is low, the provider/source goes to the list of less preferred partners in the best case and to the black list in the worst case and cooperation with them is aborted.  In this case business and future patients suffer loss as procedures and other conditions become more complicated for them.
‍

In case of exclusivity rule the cases are exclusively sent to a particular partner (according to territorial or medical direction), which increases the number of applications and percentage of implementation as well. Thus, a higher ranked business partnership is established and the source/provider appears in the priority list of a clinic or company that improves procedural and other (including financial) conditions for patients.

The essence of medical tourism business is to provide patients with better conditions than they might have received in case of contacting independent clinics.
‍

Mostly, case management is urgent and quick reaction and communication, information exchange, document preparation/sending and other activities are being carried out in minutes, which is essential for competitiveness on the market.
‍

The medical tourism business has huge and increasing potential in the Russian-speaking market and worldwide as well. This market has not been assimilated yet and is waiting for big and strong players, which will cover large segments and make services universal.

This process is inevitable – small players shall be obliged to become bigger in the growing competition. A problem of experienced cadres, their preparation or providing additional training to the existing cadres for future challenges.
‍

The future of healthcare is multi-profile big medical centers combining basic medical intellectual, scientific and material resources; telemedicine, connecting them with each other and telemedicine offices in regions and villages; E-healthcare; and medical tourism, which is the future of global healthcare.
‍

His company, “Medtourgeorgia,” sends about 20-50 patients per year from Georgia. He also works in Berlin, Germany in “mednetberlin”, where he attracts many more patients from all over the former USSR region, using his web marketing tool, medical portal: www.berlinhospitals.ru. By this portal they interact with several patients daily.