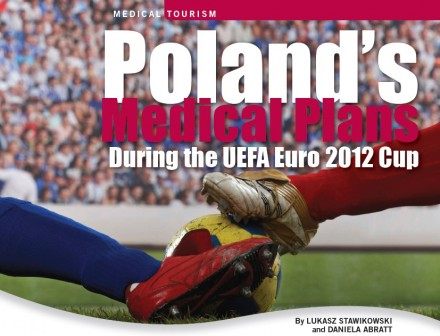 The UEFA Euro 2012 Championship kicked off on June 8. This year’s hosts Poland and Ukraine readily prepared stadiums, hotels and public response teams to welcome soccer fans from around Europe and the world. The influx of visitors will certainly have an effect on the countries’ economies, but what effect will it have on the medical tourism industry? And what kind of access to medical help will tourists have during the tournament?

Since Poland joined the European Union in 2004, the number of tourists has increased year to year. In general, the popularity of medical tourism is growing mainly among the visitors from Sweden, Germany, Britain and France. Most foreigners visit Poland for its spas, dentists and plastic surgeons, but there is also growth in the areas of orthopedics, eye surgery, rehabilitation, cardiac surgery and cosmetic treatments.
‍

Will tourists actually seek intense medical procedures during the Cup?

Visits to family, friends and football matches could be combined with visits to a doctor. This natural process has helped medical providers attract potential patients. However, the focus of football tourists may not be to find professional medical care but rather to follow their football stars around the country.
‍

Access to medical care coincides with the soccer hubs around the country. Completely new stadiums have been built in Gdansk, Wroclaw, Poznan and Warsaw, where many residents traveling from Western Europe normally go to have medical procedures. Main market leaders foresee a 20 percent growth in patients from year to year, and hospitals expect steady market growth of 10 percent. But this projection might have nothing to do with the soccer tournament.
‍

Medical treatment for the players

The Carolina Medical Center in Warsaw has been chosen as the designated medical facility to care for the soccer players, judges and UEFA dignitaries during the championship. The hospital specializes in orthopedics, rheumatology, neurosurgery, diagnostic imaging and rehabilitation.

It's doctors speak several languages including English, German, Russian and French and have been trained in schools and residencies across the world. The hospital, accredited by the Ministry of Health, has also been chosen to serve the Polish Olympic teams during the London 2012 Olympic Games.
‍

Krzyszt of Cetnar, the hospital’s CEO, said he has assigned a few staff members to help mobilize faster access to care for the players. He added that because the hospital has been elected for the care of the athletes, it will not be serving visitors and medical tourists.
‍

“Our medical tourism aspect will be seen after the tournament, when people see how we have treated some of the best soccer players in the world,” he said. “We are building our reputation this way, not with an international accreditation.”
‍

He said the hospital will earn visitors’ trust and future business by proving that it was capable of successfully treating world-renowned athletes.
‍

“We may be perceived a little differently than other hospitals just because we have famous clients,” he said. “Based on this placement, I expect that we may build a stronger reputation and more valued relationship between medical tourism facilitators.”
‍

The Polish government adopted the Integrated Organization and Management Plan, which covers the activities of public administration entities, control bodies and services during the tournament. There are 240 institutions that are engaged in preparations for the Cup, and detailed testing of operations plans was underway until May 15, 2012.
‍

In terms of public safety, Cetnar said the police have been preparing and testing various protocols in the event of a massive or risky incident. “But everyone expects that this problem won’t actualize,” he said.
‍

Tourists have a variety of options available to them to receive medical treatment. One option is to purchase a Polish Pass. Visitors can use the Polish Pass to book accommodations, ride public transportation and buy travel tickets to and around Poland. The pass also includes medical insurance coverage to certain hospitals around the country from one of Poland’s largest insurance companies from May 1 to August 21.
‍

But foreign travelers might not need to buy it because often times their own insurance will be accepted, Cetnar said. And if the visitors are citizens of the EU, they should have a medical health insurance card that enables them to be examined on a basic level and have the expenses covered.
‍

The country expects to receive about 1 million tourists throughout the duration of the tournament. Cetnar does not think many of these people will be coming to the country both to enjoy the soccer games and to receive medical treatment. Therefore, 90 percent of the medical issues that arise will be taken care of in the stadiums, 9 percent will be diagnosed outside the stadiums, and 1 percent will be hospitalized.
‍

He said there is a network of 26 hospitals and 500 smaller medical offices that are nearby and designated to serve tourists. He believes these facilities have not made many changes to prepare for the influx of visitors other than adding more staff to certain shifts. Instead, they were all selected because they were already equipped and prepared to handle more patients. Tourists will be informed about what facilities are available to them.
‍

Additionally, all host cities in Poland and Ukraine are required to set up an Official UEFA Euro 2012 Fan Zone in the central part of the city, which will enable fans to gather together and watch the games live for free.

These fan zones will be equipped with additional emergency exits and will provide free medical assistance at first aid posts located within the fan zone. They will also be monitored by volunteer medical foot patrols, and there will be an ambulance waiting outside to transport fans to the nearest hospital in case they need more serious treatment.
‍

The effect on the medical tourism industry in Poland can be measured only in the months and maybe even years following the UEFA tournament. But the outlook looks positive. Poland will certainly gain from the investments in infrastructure, urban development, airports, hotels and construction.

The hope is that tourists will be impressed and will choose to come back in the future to take advantage of great medical staff, well-equipped clinics, lower prices, access to specialists and high standards of medical services.
‍

Lukasz Stawikowski, MD, is an independent observer of the developing medical tourism market in Poland. He has more than five years of experience in the industry and writes articles and reports for several clients, including www.medical-tourism-poland.com. He can be reached at lukasz.stawikowski@yandex.com.

Daniela Abratt is completing a Bachelor of Science in Journalism and minor in International Development and Humanitarian Assistance at the University of Florida in Gainesville and will graduate in May 2012. She has previously interned at The Miami Herald and will attend law school at FIU in Fall 2012. She writes for the Medical Tourism Association’s Medical Tourism Magazine and Health Tourism Magazine.