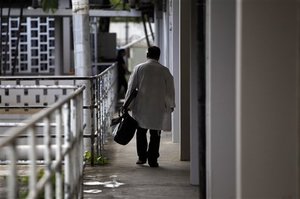 Already frustrated with long lines and a scarcity of specialists, patients in Puerto Rico are finding they may have little choice, but to follow the mass exodus of doctors and nurses off the Caribbean territory and seek treatment elsewhere.

In the last five years, some of the top doctors in Puerto Rico have left for the United States in search of higher salaries and greater reimbursement from healthcare insurers. According to the island's Medical Licensing and Studies Board, the number of doctors in Puerto Rico fell 13 percent, from 11,397 to 9,950. The biggest loss came from primary care physicians and specialists.

Of the roughly 400 cardiologists who practiced in Puerto Rico about five years ago, only 150 or so remain. The number of anesthesiologists has dropped from roughly 300 to about 100 in the same time period, the island’s Association of Surgeons reported.

Medical professionals say they expect the situation will worsen, but what opportunities healthcare professionals can expect when they get to the United States and are confronted by new federal laws is uncertain.

Some believe President Obama’s new healthcare law dubbed ObamaCare may mean the United States will need more doctors amid an influx of patients who may have greater access to healthcare. But, beyond that, definitive implications from the controversial legislation remain muddied for both patients and providers.
‍

So, the question begs whether or not those same Puerto Ricans needing treatment may be able to find affordable care on the mainland or, as a result, may have no alternative than to seek other medical tourism destinations instead.
‍

At the same time residents of Puerto Rico may be forced to leave their homes for care, like a revolving door, medical tourism is attracting foreign patients to the island in their place. Already, two new hospitals are being built in Manati and Bayamon for the purpose of and catering mostly to travelers from elsewhere in the Caribbean, and even some from the U.S. mainland. Many of these U.S. tourists seek cosmetic surgery while their Caribbean counterparts look for specialists.
‍

The island of 3.7 million people has no more than two pediatric neurosurgeons, even though guidelines require at least one pediatric neurosurgeon per roughly 80,000 people. Puerto Rico also lacks 93 full-time primary care physicians to adequately cover the medical needs of the population, according to statistics from the U.S. Health Resources and Services Administration, which tracks areas suffering from a shortage of health professionals.

Of the island’s 78 municipalities, 37 need more healthcare professionals including the capital of San Juan and Ponce, the island’s second largest city. The island has roughly 7,000 primary care physicians.
‍

Family and general practitioners in Puerto Rico earn about $72,000 a year, compared to $180,000 for those in the United States, according to 2012 statistics from the U.S. Bureau of Labor. That’s partly due to the lower wages on the island, where the median income is less than $28,000 a year, far below mainland standards. Puerto Rican healthcare providers also get less reimbursement from Medicare for particular services than do those in any other U.S. state or territory.
‍

Currently, more than 670,000 people in Puerto Rico use Medicare. While the U.S. government is scheduled to revise how Medicare reimbursements are determined next year, that won’t stop doctors from leaving and patients to follow. Whether or not Puerto Rican patients make the United States a stop or choose a destination somewhere else, will depend on how Obamacare plays out, beginning next year.
‍

A recent study commissioned by the island’s Association of Surgeons found the doctor shortage to be aggravated by retiring doctors, and by the fact that fewer doctors are studying allergy, endocrinology, geriatrics and urology. The study also warned about a scarcity of specialists including cardiologists, anesthesiologists and orthopedic surgeons.