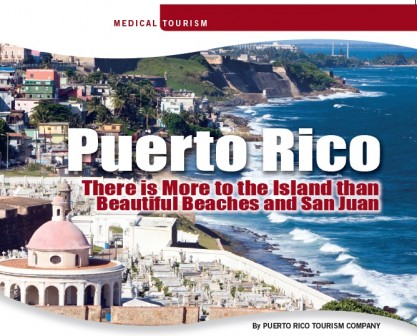 Puerto Rico provides the ideal getaway for travelers seeking “beaches plus.” On the Island, visitors will find diverse geography and a wealth of activities, accommodations and restaurants. Whether visitors are looking for a relaxing island escape, golf or scuba vacation, an adventure trip amidst tropical rainforests or a getaway rich in history and culture, the island of Puerto Rico offers all these experiences and more.

San Juan, the capital of Puerto Rico and the gateway to the Caribbean, offers a myriad of attractions to travelers, including the charming commercial and residential district of Old San Juan, world-class beachfront hotels in Condado and Isla Verde, casinos, exclusive shopping, museums, fine restaurants and trendy nightclubs.
‍

Among the most recognizable landmarks in Puerto Rico is El Morro, the fortification visibly protecting the Bay of San Juan. Along with Fort San Cristóbal, both protected Old San Juan from invaders for hundreds of years. In Old San Juan there is a seven-square-block area over 500 years old with a bustling center dotted with ancient churches, plazas, historic sites, trendy restaurants, hip boutiques, galleries and Fortune 500 companies.

The defensive fortifications of San Juan, including La Fortaleza, are a United Nations-designated World Heritage site. Within them lies the Catedral de San Juan, a rare example of medieval architecture in the New World and Ponce de Leon’s final resting place. Other historic sites not to be missed include: Paseo La Princesa, the San Juan Gate, Cuartel de Ballajá, and Plaza de Armas.

‍
While San Juan is at the heart of Puerto Rico and boasts an old-world flavor with a unique mix of culture and architecture not found in any other Caribbean city, there are four other diverse regions that also exemplify the true soul of the island: Porta Atlántico (North) Central, East, Porta Caribe (South), and Porta del Sol (West).

From the El Yunque tropical rainforest in the East, to the quaint beach town of Boquerón in the West, Puerto Rico offers a diverse cultural landscape and activities that appeal to all types of travelers.
‍

Nature buffs and sports enthusiasts won’t want to miss the rare black sand beaches and the pineapple plantations of the small coastal town of Barceloneta as they head westward through Northern Puerto Rico. The Cambalache Forest offers challenging mountain bike trails, as well as four miles of winding hiking trails and camping facilities.

Visitors to recibo can visit the world’s largest full-dish radio telescope at the Arecibo Observatory and can participate in hands-on exhibits and tour the telescope site, featured in the James Bond movie Goldeneye, and other films such as Contact.
‍

For visitors looking to get close to the water, but not necessarily submerged in it, Puerto Rico offers deep-sea fishing year-round. Fishing is best from October to early March when dorado, mahi-mahi, wahoo, white marlin and yellow fin tuna are in season.

The north side of Puerto Rico is known as “Blue Marlin Alley” because of the large number of migrating fish that pass near its shores, especially in the summer. Charters are available from harbors in San Juan, Fajardo, Humacao and Mayagüez.

‍
Lastly, a trip through Northern Puerto Rico wouldn’t be complete without a visit to the Rio Camuy Cave Park, the third-largest cave system and underground river in the world. The entire family will enjoy this adventure, as visitors descend into a 200-foot deep sinkhole and view lush tropical vegetation, then walk through the majestic Clara Cave, full of stalagmites and natural formations millions of years old.

‍
The Central region of Puerto Rico is scattered with the Cordillera Central Mountain Range, as well as some of the most secluded, yet culturally rich, towns of Puerto Rico. With a mixture of Spanish, Taíno Indian and African cultures, Central Puerto Rico is a historical melting pot of customs and architecture.
‍

The Rio Abajo Forest in Utuado is the perfect destination for hiking aficionados, and features an extensive network of hiking and mountain climbing trails. On the weekends, travelers can take a ferry over Dos Bocas Lake in Utuado and dine over the waterfront in one of the area’s exceptional restaurants.

‍
For a second day of mountain hiking, the Toro Negro Forest Reserve in Villalba is a fantastic excursion filled with winding trails and amazing scenery. The 7,000-acre park offers a spectacular view from the highest point of the Cordillera Central range.
‍

The most traveled of Puerto Rico’s regions; the Eastern area offers some of the most breathtaking scenery and invigorating attractions on the island. Your journey eastward begins with a trip to the town of Rio Grande, the home of El Yunque, one of the most spectacular rainforests in the world and the only rainforest in the U.S. National Forest System.

Part of the Caribbean National Forest, this natural wonder is home to 240 species of tropical trees, exotic flowers and wildlife. A must-see for travelers of every age, El Yunque provides opportunities to learn about the history of the forest at the El Portal Tropical Forest Center and then hike amongst the flora and fauna on El Yunque’s many trails.
‍

With its crystal-clear water and prolific sea life, Fajardo is one of the best places in the Eastern region for sailing, snorkeling and diving. A longtime fishing town, Fajardo competes with Porta del Sol for some of the best seafood restaurants in Puerto Rico. After a delectable seafood lunch, travelers can end their day at Las Cabezas de San Juan, a unique 316-acre nature preserve on the northeast tip of the island.

A restored 19th century Spanish colonial lighthouse is the focal point of the site, providing amazing views of the Atlantic and the mangroves, lagoons, cliffs and cays throughout the preserve.

The Islands of Vieques and Culebra, known as the Spanish Virgin Islands, are just off the coast of Eastern Puerto Rico, and are hotspots among Puerto Rican locals, as well as travel gurus and celebrities from around the world.

Within the past few years, Vieques has experienced steady growth, and several trendy inns and restaurants have developed near the shore. Most visitors travel to Vieques for its fabulous pristine beaches, including Sun Bay, Navío and Half Moon, and its azure waters, ideal for snorkeling and diving.

One of the most fascinating attractions on Vieques is Mosquito Bay, gorgeous by day and positively radiant by night due to bioluminescent organisms that cause the water to literally glow at night when it’s splashed in the moonlight. Other bioluminescent bays can be found at Las Croabas in Fajardo and La Parguera in Lajas.
‍

For travelers looking for even more seclusion from the real world, Culebra offers tranquil beaches and incredible wildlife. The Culebra National Wildlife Refuge is called “Ultima Virgen” (Last Virgin) because of its proximity to the Virgin Islands; the underwater vistas and unexplored reefs are a diver’s paradise. Among its many “best of” honors, Flamenco Beach has the prestige of being voted as one of The Travel Channel’s best beaches in the world.
‍

Ponce, the “Pearl of Southern Puerto Rico” and the second largest city on the island, is known for its fusion of cultures and neoclassical architecture. Visitors will detect a Colonial ambiance, with Ponce’s many beautiful plazas, colonial  mansions and ornate churches.
‍

Adventure seekers should explore the Island of Caja de Muertos (“Coffin Island”) and its Blue Flag certified Playa Pelícanos which is only a short boat ride away from Ponce. Transfers are available only on weekends. There, divers take advantage of one of Puerto Rico’s most unspoiled and spectacular underwater experiences in the Caribbean.
‍

This region of Puerto Rico is a world-class dive destination due to the incredible Marine Wall, located approximately one mile off-shore, providing spectacular dramatic under water vistas and bushes of distinctive black coral.

This extraordinary Marine Wall has a series of slopes and sheer drop-offs that start at 30 feet to 120 feet before disappearing into a 2,000- foot drop, well beyond diver depths. For snorkeling, beaches near Ponce such as La Parguera offer fantastic reefs right off shore. There is no need for a boat with excellent visibility and amazing coral reefs only yards away from the shoreline.

‍
Surfers from all over the world travel to Rincón for some of the most challenging waves in the world. In winter, visitors can watch surfing competitions and visit the newly-renovated Rincon Lighthouse and Park, a prime location for whale watching, as humpback whales swim close to the shore.
‍

As the third largest city in Puerto Rico, Mayagüez’s smallcity urban atmosphere serves as a great destination for families. Mayagüez offers shopping and restaurants with traditional Puerto Rican fare, and boasts Puerto Rico’s only zoo. The city was selected as host city for the 2010 Central American and Caribbean games during summer season.

Heading south down the coast, travelers can unwind in the beach area of Boquerón in the town of Cabo Rojo. Boquerón provides one of the best secluded public beaches on the island. After an afternoon of kayaking or windsurfing, visitors can watch the brilliantly colored sunsets on Boquerón beach.
‍

San Germán, or the “City of Hills” as it was once known, is Puerto Rico’s second oldest city. By far the most popular attraction in the area is Iglesia Porta Coeli, one of the oldest (and smallest) churches in the New World, which was built by friars in 1606. Today, visitors can take a tour of the church, which has been converted into a state-owned museum featuring a small but prestigious collection of historical artifacts.
‍

Guánica is a must-see in the Western region, with its gorgeous bays and beaches that dot the coastline. The town’s biggest attraction, however, is the Guánica Dry Forest Reserve, a unique, dry woodland that has been designated a World Biosphere Reserve. Visitors can hike through the lush forest trails and view more than 700 types of plants and 135 types of birds.
‍

Nature buffs and campers should consider a visit to Mona Island, known as the Galápagos of the Caribbean, just off the shore of Mayagüez. As there are no inhabitants on this island, no facilities, and no lodging, Mona Island is ideal for overnight extreme-style camping trips, hiking or diving in crystal clear waters.
‍

How to Plan Your Trip

For more information and details about accommodations, attractions and activities Puerto Rico has to offer visit the Puerto Rico Tourism Company website at www.seepuertorico.com.