Puerto Rico's Beaches are Home to a Variety of Water Sports 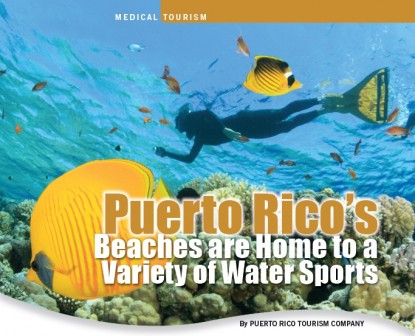 Puerto Rico, home of the most beautiful beaches in the world, has hundreds of miles of coastline that harbor an endless selection for beach connoisseurs and sports enthusiasts. Beaches come in every size and color, from the pure white dunes of Isabela to the black volcanic sands near Punta Santiago. The variety of coastline offers visitors the opportunity to partake in a variety of water sports, from jet skiing on rough waters to parasailing on peaceful tides.

Isla Verde is a series of beaches that stretch for miles in front of luxury resorts and posh high-rise residential apartments, setting the beautiful backdrop for San Juan. A tranquil place during the week, Isla Verde really comes alive on weekends when beach lovers stream in to party, play, swim and sun. While most visitors soak up the sun reading, napping, or taking a stroll along the surf line, the more adventurous go parasailing, bodysurfing, water skiing and jet skiing.
‍

A short trek to the east of San Juan is Luquillo, one of the island’s most popular beaches. It is a beach where families can relax knowing that lifeguards are on duty and the offshore reefs keep the waters calm. This beach is also a diver’s paradise as the average ocean temperature is 81ºF and underwater visibility averages from 60 to 75 feet perfect for exploring the underwater wonders.
‍

In the Northeast, near the town of Fajardo, locals and tourists are drawn to Seven Seas Beach, a cozy stretch of shoreline featuring fine white sands. A great place to snorkel, the shallow sea bottom is teaming with tropical fish, coral formations and an abundance of other sea life. Offshore reefs help keep the waves away and strong winds make it an ideal spot for sailing and windsurfing.
‍

Continuing east, nine miles off the main islands eastern coast, visitors can find the island of Culebra, which offers a paradise of beaches so perfect they are almost impossible to believe. The crowning jewel is Flamenco Beach, named one of the Best Beaches in America and Best Escape Beach by the Travel Channel.

A magnificent mile of pure white coral sand framed by Culebra’s arid, sun-toasted hills, it is protected as a Marine Wildlife Reserve by the Department of Natural and Environmental Resources. Flamenco is only one of many unspoiled, pristine beaches on Culebra where you can enjoy blissful solitude as you swim in the blue green waters or explore some of the most stunning coral reef formations in the Caribbean.
‍

The west coast offers equally amazing beaches, such as Rincón Bay on the westernmost tip of the island. Rincón straddles the rough Atlantic and the gentle Caribbean, so its six beaches provide the best of both worlds.

Since 1968 when it was the site of the World Surfing Championships the town has gained a reputation as the surfing capital of the Caribbean. A generation of international surfers has challenged the fast and furious offshore waves; so many have settled in the village that it has developed an expatriate subculture.
‍

In addition to surfing, Puerto Rico’s countless beaches and year-round warm weather offer sports enthusiasts a wealth of outdoor activities that take place in, on, or around the water. You can experience windsurfing, sailing, snorkeling, scuba diving, kayaking on the Tanamá River or the Caribbean Sea, body surfing down a rushing mountain stream, or fishing the deep seas or the rivers, lakes and bays.
‍

Whatever your favorite water sport is, you can do it better in, on or near the tropical waters of Puerto Rico. Fishing can be enjoyed year round, and is best from October to early March when dorado, mahi-mahi, wahoo, white marlin and yellowfin are in season.

The north side of Puerto Rico is known as “Blue Marlin Alley” because of the large number of migrating fish that pass near its shores, especially in the summer. Charters are available from harbors in San Juan, Fajardo, Humacao and Mayaguez.
‍

Although relatively new to Puerto Rico, kayaking and canoeing are marvelous ways to sightsee or bird watch on the island’s many man-made lakes, or on its countless coastal inlets, coves and bays. Some of the most popular sites for ocean kayaking are along the coasts of the island municipalities of Vieques and Culebra, Ballenas Bay bordering the Guánica Tropical Dry Forest in the southwest, and the small east coast islets and cays off Fajardo.
‍

For visitors who want to take their water adventures below the surface, Puerto Rico is known for an abundance of diving sites that afford 60 to 75 feet visibility near the shores and up to 100 feet offshore. The northeastern areas Aguadilla and Isabela have the most impressive shore diving. Overall, the most exciting dives are made near Desecheo Island off Rincón, near Mona Island, 50 miles west of Mayaguez, and off Culebra and Vieques.
‍

For snorkeling, the shallow reefs near San Juan, Dorado, Mayaguez and Humacao are perfect. The rich marine life below the surface is swarming with coral formations and tropical fish. The pristine waters offer full visibility and divers can enjoy the warm waters averaging 80°F.
‍

For more information about beaches and water sports in Puerto Rico visit the Puerto Rico Tourism Company website at seepuertorico.com