Q & A - A Physician's Opinion on ObamaCare 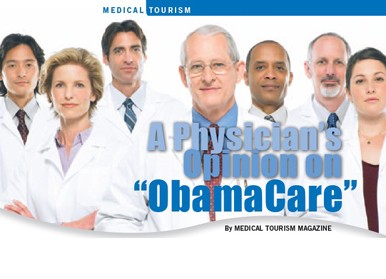 “Omnia pro aegroto” or “all for the patient” is the motto one association fights for. The Association of American Physicians and Surgeons (AAPS), formed in 1943, came to life out of the need to educate physicians and the public about the dangers of allowing third parties to intrude between the physician and his patient. It has always made efforts to influence legislation by warning of the dangers of Medicare and Medicaid and fighting the inception of the HMOs to fighting Big Government takeovers of the profession.

AAPS is a non-partisan professional association of physicians in types of practices and specialties across the country. This association holds themselves to the standards of the Oath of Hippocrates.
‍

Since inception, this concept has always been a struggle between opposing views of politicians who believe in government processes. The difficulties have not stopped efforts of the AAPS. In the 1990s, they successfully fought “HillaryCare” and won, and since then they initiated a lawsuit against ObamaCare within the first week after its passage and filed an amicus brief before the U.S.

Supreme Court. Currently, they are teaching physicians how they can run third-party free medical practices and so far it has proven to be successful. Their goal is for people to be able to privately contract with the physician of his choice with no government and minimal insurance company intrusion.
‍

Below is an interview sharing a physician’s opinion,  Alieta Eck, president of AAPS, shared her opinions and the stance the AAPS has taken on the issue of “Why Physicians Oppose the Insurance Mandate?”
‍

How major is this issue?

American medicine is in great peril. Government intervention is strangling innovation and diminishing the independence of the physician. We in AAPS have seen a way out and will continue to promote policies and seek to change legislation that will restore freedom in medicine. This will be better for patients and better for physicians who have invested a great deal into their training.
‍

With “ObamaCare,” providers will be able to lobby Congress to have their service included in the mandate. How does that negatively affect physicians?

It affects us all by causing health insurance premiums to rise. Having to pay more for insurance leaves less to pay for other necessities. Healthcare dollars are allocated wastefully, paying for Scooters and not medical care.
‍

How exactly do you feel the private relationship between physicians and patients will be changed by implementing the new insurance mandate?

“ObamaCare” will drastically change the physician/patient relationship if allowed to stand.  Physicians will be collectivized in Accountable Care Organizations (ACOs), and patients will not be accessing the physicians directly.

Incentives will be set up whereby physicians earn more when they do less for patients and order fewer tests or procedures. The goal is to eliminate private practices and suppress physician autonomy and decision-making.
‍

What do you propose instead of eliminating pre-existing medical condition restrictions?

Patients ought to be directly responsible for their own medical care, just as they are directly responsible to buy their own food and clothing and to pay for a place to live. They ought to be able to buy the kind of coverage they want with the deductible they want. This would protect them in case they develop an expensive illness. They should be motivated to keep a policy while they are well, realizing that it will be impossible to obtain once they become ill.
‍

You cannot buy homeowner’s insurance once your house is burning down. You cannot purchase auto insurance to fix up your car after you have been in an accident.  Having pre-existing condition restrictions allows patients to forego buying insurance until they get sick, knowing that it will be just as available as when they were well. And this causes premiums to be prohibitively high for those who choose to have insurance.
‍

You used the example of the high amount of administrative costs of mammograms in an article you wrote. What do you propose instead of insurance companies covering this cost?

In the same article, she made the comment that “ObamaCare is a private sector, job-killing bureaucratic nightmare.” What do you mean by that?

“ObamaCare,” by forcing every company to buy expensive mandate-laden insurance for their employees, will raise the cost of hiring. This will kill job creation. “ObamaCare” is bureaucratic, with many levels of government meddling, coercing and restricting. It will make medical care more costly and less efficient.
‍

What kind of health care plan would you like to see?

The best health plan involves the greatest choice and price transparency. Medical Savings Accounts would be a great step in the right direction. People spending their own money on 90 percent of medical services would cause the free market to thrive. High deductible insurance is the less expensive than low deductible insurance, and people need to be able to save the difference, using it to get the best value for their healthcare dollars.
‍

Also, I would like to see the bureaucratically bloated Medicaid system phased out and replaced with real charity. In New Jersey, we are working on developing a plan whereby physicians donate their time in or through non-government free clinics where the poor can access care when they become ill.

We will ask for physicians to donate four hours a week in such clinics with the State providing medical malpractice coverage to their private practices instead of paying them. Eliminate the billing, paper-pushing, ICD-9 codes, and let us simply care for the poor when they are sick.
‍

What are your ideas of fixing the current healthcare crisis?

Get the government out of healthcare. Before 1965, when Medicare and Medicaid began, patients got care and physicians provided it, free of charge if necessary.
‍

Is your viewpoint widely shared amongst other physicians?

More and more. When physicians stop to think about these issues, they are generally in agreement. The Association of American Physicians and Surgeons (www.aapsonline.org) began in 1943 to work to preserve the physician-patient relationship.

They believe that the government is a poor provider of medical care. Those who favor “ObamaCare” are generally physicians who are in administration and not seeing patients directly.