Quality Beginning to Take Guesswork Out of Medical Tourism 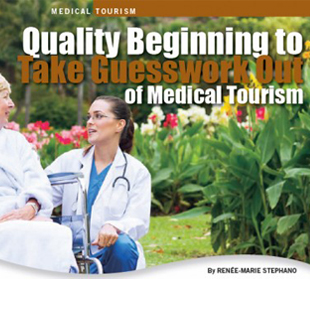 For any patient considering medical tourism for the first time, exotic destinations like India, Thailand and Costa Rica are sure to whet the palate for treatment abroad. But, as tantalizing as thoughts of basking on tranquil beaches and sightseeing through ancient ruins may be, they can just as quickly be displaced with notions and judgments about care or lack thereof it.
‍

In many respects, medical tourism is not unlike walking into a movie theater. The film has gotten great reviews, but the bulk of the movie is unseen and still in doubt. Patients thinking about becoming medical tourists have heard all about the tremendous travel opportunities, the incredible cost savings and the convenience of not having to wait extended periods for treatment.
‍

But, far too many willing to risk life and limb have heard very little about the quality of care or, more specifically, the facilities, the doctor and staff expertise, or the echnologies available overseas. Granted, no one in their right mind would want to compromise on quality and safety, then, logic should dictate that cost should not consistently trump services and outcomes when making a decision.
‍

Therein is the obstacle for those debating the merits of becoming medical tourists and the providers who offer such care and services: how to take the guess work and, as a result, the anxiety and fear out of the minds of potential patients or customers?
‍

Fortunately, perception is not necessarily the reality in medical tourism today. Anyone willing to put the time and effort into research will find that the days of taking life and safety into their own hands just to save a buck are long gone.

They will see that countries all over the world are seeking to capitalize on the rising costs of healthcare in the United States or the limited services and procedures available in other nations to instead attract patients within their own borders.
‍

In many cases, convincing need be minimal. When cost is of no object, patients are usually eager to travel abroad for prompt access to procedures like hip or knee replacements. And with little prompting, some immigrants will always feel more comfortable returning to their nation of origin for care amongst family and friends or doctors they are most familiar with. That said quality remains highest on the list among factors influencing medical tourism decisions than even the price of a procedure.
‍

“Pursuing medical travel opportunities should not have to be as complex and difficult as dissecting foreign policymaking, but sometimes they are.”

Perception Is Not Reality

Quality is at the heart of why some 50 countries have already recognized the economic benefits of medical tourism and have thrown their full support behind initiatives to build top-flight treatment centers, train and attract skilled specialists, develop and maintain standards and create campaigns designed to eliminate negative perceptions.
‍

Why else would the government of Malaysia, already one of the hotbeds for medical tourism, attempt to equal or better care offered in the United States by adding to its six public hospitals new construction of a children’s center and public structures in David and Panama City as well as in various provincial cities.
‍

In many locales, the financial investment is already paying dividends. India, Malaysia, South Korea, Taiwan, South America, and nations in the Middle East are all home to worldclass facilities; thereby, raising the bar for positive outcomes and performance to entice even more medical travelers.
‍

“Fortunately, perception is not necessarily the reality in medical tourism today. Anyone willing to put the time and effort into research will find that the days of taking life and safety into their own hands just to save a buck are long gone.”

The competition for foreign medical dollars has not only increased the stakes, but has also motivated hospitals and facilities to seek highly coveted Joint Commission International Accreditation, a rigorous process to undergo before being granted the governing body seal of approval. Malaysia alone is home to seven JCI-accredited hospitals, where most doctors speak English.

Comparatively, as many as 19,000 hospitals in the United States have Joint Commission accreditation, setting a benchmark to be that much more lucrative and appealing for facilities abroad to match on an international scale.
‍

So, as the advent of quality care continues to extend and becomes more and more attainable, finding it can present a host of challenges of its own. Pursuing medical travel opportunities should not have to be as complex and difficult as dissecting foreign policymaking, but sometimes they are. That’s where medical facilitators come in and fill a void.
‍

In the past three or four years, thousands of these buyers — or those identified with names similar to health and travel — have sprouted up on the medical tourism landscape. Medical tourism facilitators can sort through the intricacies and nuances of the industry and act much like a travel agency, booking flights, arranging hotel accommodations, obtaining passports and finding the best and most appropriate facilities and doctors.
‍

As the term indicates, facilitators act as servers. The main course is and should be the medical experience. Surveys indicate that even patients looking for the best bargains are willing to pay a little bit more to ensure quality care and services. The good news is they don’t necessarily have to.
‍

Overseas destinations are increasingly offering modern and well-equipped hospitals that are recognized and affiliated with respected international facilities including Wockhardt Hospital in Bangalore, India, which is linked to Harvard; Punta Pacifica in Panama, with Johns Hopkins; in Costa Rica, CIMA with Baylor University in Texas, Clinica Biblica with Jackson Memorial Hospital in Miami and Evergreen Healthcare in Washington state; and in Mexico, most notably, Star Medica, a healthcare chain affiliated with seven hospital in Los Angeles.
‍

Not only that, these hospitals and others are staffed by highly respected doctors and nurses trained in the United States, Canada, Brazil and throughout Europe including the United Kingdom and Germany. Some medical tourism destinations boast their own medical schools, like the two in Montevideo, Uruguay.
‍

All that sounds well and good. The important thing to consider is if anyone is listening. At any rate, it is imperative for governments and agencies charged with advancing medical tourism in their host countries to get in the business of selfpromotion.

Only then, will these nations make inroads that address the fears related to quality of care in the minds of potential customers and establish productive and credible medical tourist venues instead.
‍

Changing public perceptions could not come at a more opportune time. In the United States, a hesitant population inches closer to full implementation of healthcare reform at the beginning of 2014. Even the staunchest proponents of the new legislation are willing to concede that healthcare costs will skyrocket at the onset of Obamacare; thus, opening a window for patients to travel outside the United States. What effects the costs will have on the quality of care that Americans will receive once the plan is at full throttle is still in question.
‍

Some studies suggest that roughly 14 million Americans who have insurance outside their places of employment will probably receive more health benefits under Obamacare. Conversely, other industry experts say individuals covered by a group policy will likely have little change in their employee provided plans.
‍

Meaning, the issue — like it usually does — comes down to the bottom line and how far patients in the United States are willing to reach into their pockets to feel it. Especially in tough global economic times, quality and cost can be difficult factors for any patient — regardless of location — to juggle.

Medical tourists can at least feel confident that compromising on one or the other of these components doesn’t have to mean dropping the ball on their treatment and care.
‍

Renée-Marie Stephano is the president and co-founder of the Medical Tourism AssociationÂ® and editor-in-chief of Medical Tourism MagazineTM and the Health and Wellness Destination Guide series of books. Ms. Stephano has authored several books from “Developing International Patient Centers, Best Practices in Facilitation, to “Medical Tourism for Insurers and Employers, and the most recent, “Engaging Wellness.”
‍