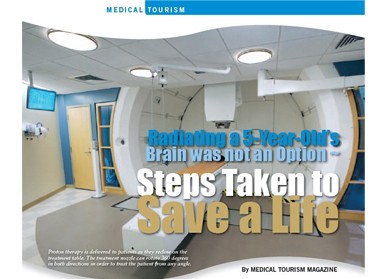 Finding out that your child has a fatal disease is every parent’s worst nightmare; unfortunately, this was the case for one family in Australia and their 5-year-old daughter. Last March, Audrey Anderson was diagnosed with a craniopharyngioma, an uncommon type of brain tumor located a few inches behind her eyes. The best option required to treat her tumor was not available in Australia, so her parents began the search for a way to save their daughter’s life.

“When we found out, we were in a clear state of shock quickly followed by a need to understand the plan,” said Sue Anderson, Audrey’s mother.

Two days after Audrey’s diagnosis, her surgery was scheduled to remove the mass. After 10 days in the hospital and multiple rounds of surgery, she was finally in a stable state. The plan after surgery was to go through rounds of radiation in an attempt to reduce the size of the tumor; at least that is the path typically followed. During their first meeting with an oncologist, they shared their proposed plan of attack, only to find out he sternly recommended against radiating a 5-year-old’s brain.

“This came as a shock to us as we had naturally given ourselves comfort that we would just follow the path that others have set for us,” Anderson said. “But he was asking us to make our own informed decision. There was no clarity as to why radiation was not the smart thing to do.”

After researching through numerous medical journals, they found that other options existed and other technology that was nonexistent in Australia was available in the U.S. They came across Proton Beam Therapy, a different type of radiation therapy that spares healthy tissue from the damaging effects of radiation. Next, they had to choose one of the five facilities that offered Proton Therapy for pediatric patients.

After speaking with each of the facilities, the University of Florida Proton Therapy Institute (UFPTI) made the best impression. The Andersons were referred to Dr. Danny Indelicato, the institute’s pediatric radiation oncologist.

“With no hesitation, Dr. Indelicato provided such insight into the reason why Proton Therapy was the best option for our daughter,” Anderson said. “He offered the highest level of support.”

In addition to their initial impression of the UFPTI, they found out that they had treated over 35 pediatric craniopharyngiomas in the last two years. Since the opening in 2006, the facility has treated more than 300 pediatric patients from around the world. It is a nonprofit organization affiliated with the UF College of Medicine and houses both conventional radiation and Proton Therapy. There are currently nine Proton Beam Therapy facilities in the U.S., and only a few are set up with a full pediatric program.

Another aspect the Institute prides itself on is the additional support offered to the patient’s parents and siblings through this difficult time. A team of specialists work with the pediatric radiation oncologists, including a pediatric social worker, an artist, a child-life specialist, school tutors, four dedicated pediatric nurses, a full pediatric anesthesia team and several radiation technologists.

In addition to offering specialized services for children and parents, Indelicato said that since their location is central, it has a certain appeal because patients can recover on the beach or take a trip to Disney World.

“I would say 95 percent of patients go to Disney World. It’s a nice distraction from treatment.”

“It is exceptional for pediatric patients not to be medical tourists,” he explained.

Anderson said the additional attention was a deciding factor in choosing this institute for treatment.

Since the course of treatment had been established, the payment options needed to be figured out. Even though the pricing of this facility was half the price of others, money was still an issue. The price ranges from $100,000- $200,000.

While searching for an answer, Anderson connected with the Federal Minister of Health, Nicola Roxon. She shared with the Andersons an unknown program in place to help in these types of medical situations.

Applicants must be a permanent resident of Australia and eligible for Medicare benefits to qualify for the program. The four mandatory medical criteria are:

If all criteria are met, then the application can be submitted for approval. If financial assistance is approved, the applicant may be reimbursed for the following:

The MTO Program proved to be a life-saver for the Anderson family. They filed the application in August and within two weeks received full support for Audrey’s condition. MTO covered all medical expenses as well as all travel and accommodation for Audrey and her mother.

“This was so significant for our family as the only thing we needed to focus on now was Audrey’s treatment and not the financial road map,” Anderson said.
‍

The Andersons flew to Florida and the treatment began on Dec. 28. Indelicato, radiographers and the support team manage the building and delivery of parts of the treatment under collaborative guidance.

Audrey received radiation for one hour each day for 30 days. Patients sometimes require anesthesia during their treatment, but this was unnecessary in Audrey’s case because of the therapy offered to her beforehand. A child-life specialist worked regularly with her to prepare her for the radiation experience.

“This makes children open to the idea of radiation and lying still during the duration of therapy,” Indelicato said. “The therapist brought Audrey into the room and familiarized her with the environment and ‘Bang!’ Audrey wasn’t sacred anymore and was able to get treatment without anesthesia.”

This is also less expensive and safer.

This should be the only time Audrey will need to travel to the U.S. The follow-up treatment will be for conditions that will occur due to positioning of the tumor and the impact that it has on the hypothalamus and pituitary gland. Since the baseline was done in the U.S., the follow-up can occur in Australia. Indelicato will work with the team in Australia to monitor Audrey’s progress.

Once the treatment was finished, they left for Australia around mid-February. Results of the treatment will not be known for months, but the process was successful.

Indelicato is expecting a positive outcome.

“Statistically speaking, odds are in her favor,” he said. “She should have an 80 percent chance of a cure. We will not know for certain for some time, though.”

Audrey and her mother are now back at home awaiting her results with her father Wendel and sisters Eve and Lilly. Audrey is back in school and plans to return to the UFPTI for a follow-up appointment in one year.
‍

Parts of this article and some quotes came from a journal Sue Anderson submitted to the UFPTI, others came from an interview the MTA conducted with Mrs. Anderson and Dr. Indelicato.