Reality Check: Time of Life or Kiss of Death for Overseas Travelers 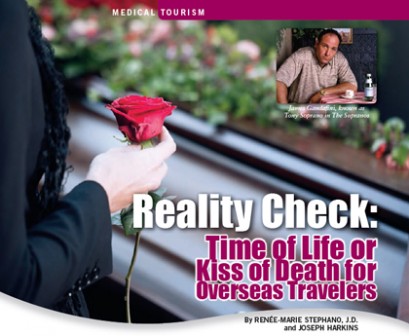 Most pleasure travelers are thrilled to death about a trip overseas and the opportunity to enjoy the time of their lives. A sad, but fact of life is that thousands of tourists lose their lives in countries they don’t call home, a thought so foreign to travelers before embarking – for whatever reasons — on a trip abroad.

The complicated logistics of repatriating remains adds to the grief and shock of many travelers who must endure the hassles of cutting through bureaucratic red tape and the high fees involved in the process of bringing bodies home.
‍

When someone dies abroad, coping can be an overwhelming experience that is often too much to ask of any family. Trying to deal with the loss is compounded by making arrangements with funeral homes and securing proper documentation from international governing bodies.
‍

‘Sopranos’ Favorite One of Many

Fans of the television show “The Sopranos” can easily recall the loss of actor James Gandolfini, 51, who was just one U.S. citizen who died overseas and had to be returned to American soil.

The U.S. State Department notified next of kin to nearly 11,000 American citizens, in 2012, and assisted surviving family members with the return of bodies and kept themabreast of any investigations, according to the agency’s Bureau of Consulate Affairs.
‍

Gandolfini’s body was flown back from Italy after suffering a fatal heart attack, a process that was expedited by U.S. Secretary of State John Kerry. But, for most Americans, the process can be akin to a long death march.
‍

Azia Ludwig had the best day of her life when she went to sleep the night of her wedding, but was woken to a nightmare.
‍

Fans of the television show “The Sopranos” can easily recall the loss of actor James Gandolfini, 51, who was just one U.S. citizen who died overseas and had to be returned to American soil.

The tragedy of her father’s fatal fall at a hotel hours after giving his daughter away in Mexico was only the beginning of a bad dream.
‍

The deadly experience included a funeral home she felt was unscrupulous and a Spanish death certificate that wasn’t accepted by all of the U.S. banks and insurance companies she’s had to deal with.
‍

43-year-old businessman and chef from Pocatello, Idaho, because there would be fewer issues involved with transporting ashes than a body, which might have taken several weeks like a parcel of lost luggage. This way, the worst that could happen — she was warned — would be that the urn could be opened and contents inspected at the airport.
‍

That would be the least of her problems. After an initial quote for the cost of cremation at $2,000 – although thousands of dollars less than the cost of transporting a body home — Ludwig was shocked to learn the price had jumped to $4,000 with $500 in cash to be paid up front. The language barrier didn’t make it any easier to explain the sudden price increase.
‍

For her sake, Ludwig scraped together the funds and got the price for cremation reduced to $2,000. She was able to fly home with the urn three days after her father’s death. Because getting an English version of the death certificate was hard enough, Ludwig gave up trying to get English copies of the police and autopsy reports. She is left to guess that her father flipped over a third-floor balcony during a night of celebrating.
‍

When an American citizen dies outside the United States, the deceased person’s family members, domestic partner, or legal representative should notify U.S. consular officials at the Department of State. Consular personnel are available 24-7 to provide assistance to citizens for overseas emergencies.
‍

Those who choose to send back a body face other challenges. Human remains intended for interment must be accompanied by a death certificate stating the cause of death. A death certificate is an official document signed by a coroner, physician, or other official authorized to make a declaration. Death certificates or copies thereof must be in English.
‍

Medical Tourism Association® advocates travel insurance as a good idea to have before leaving for an international destination. Deaths overseas may occur more often because people are living longer, which means a large aging population is traveling after retirement, and some have health conditions they are managing.
‍

The Centers for Disease Control and Prevention examined traveler habits, from 2000-2010, and found that 50 percent of 940 million international tourists became ill, but only 8 percent sought medical care during or after their trip.

The rising costs of healthcare at home have more patients traveling abroad for affordable medical tourism opportunities that may involve complex procedures and treatments – including cancer surgeries and higher risk procedures or even multiple procedures in one trip.

Decimated home values, the meltdown of 401(k) accounts and a lower cost of living have also pushed more to retire overseas. However, many of these same people still consider their country of origin as their final resting place, making romantic notions of living abroad a harsher reality to deal with when death knocks.