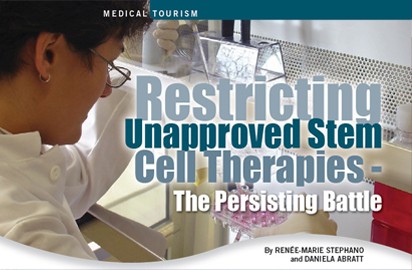 As scientists continue to develop stem cell therapies, governments around the world are setting their own rules about the use – and abuse – of such treatments. With few tested and approved therapies available, especially in the United States, people are turning to clinics abroad in search of a miracle cure. But they could potentially be subjecting themselves to more harm.

It seems that every country has its own unique regulations regarding stem cell research and treatments. The topic is evolving as new research is unveiled and potential therapies are discovered, those that suggest treatment for illnesses like Parkinson’s disease, spinal cord injuries, multiple sclerosis and diabetes.
‍

Some countries have few restrictions; others ban therapies entirely. Brazil, India, Russia and Panama all offer stem cell therapies. Costa Rica also used to have open laws, but in 2010, it banned the use of experimental treatments on patients.

It ordered the Institute of Cellular Medicine to stop treating spinal injuries and degenerative diseases because there was no evidence that the therapy was effective or safe. The health ministry said the clinic could not perform treatments but could store adult stem cells extracted from patients’ own fat tissue, bone marrow and donated umbilical cords. The government was concerned that using the therapies was reckless and possibly exploitative.
‍

In the United States, stem cell research is a hotly debated idea. In 2009, President Barak Obama signed the Omnibus Appropriations Act that contains a provision prohibiting federal funding of “research in which a human embryo or embryos are destroyed, discarded, or knowingly subjected to risk of injury or death.”

Scientists can, however, use existing stem cell lines. But in April, the Texas Medical Board approved new guidelines in the experimentation of adult stem cells. These new rules enable physicians to perform procedures as long as they are done for research and approved by an institutional review board.

Critics of these rules worry they will give doctors too much freedom to experiment with potentially unsafe therapies, while other people, like Texas Gov. Rick Perry, see them as an opportunity to lead the world in the advancement of stem cell treatments.
‍

Although Texas is reforming its rules, the U.S. generally has tight restrictions on what treatments are allowed to be performed. Additionally, those that are available are usually quite expensive. So people turn to medical tourism. They look for cheaper prices and therapies for their disease – the ones that aren’t approved yet in the U.S.
‍

And so the debate ensues. Patients who have seen results disagree with these limiting laws, arguing that they are preventing other patients from receiving relief from their ailments. Though some physicians agree, others believe that treating people based on anecdotal evidence alone is negligent and could cause more harm than good.

Until they can be scientifically proven, these therapies should be kept in trials and out of hospitals. Even medical tourism destinations, namely China, are recognizing the dangers of their own clinics that are openly offering treatments that are not approved.
‍

China’s policies – Are they working?

In May 2009, the Ministry of Health in China classified stem cell treatments as “Category 3” medical technologies – those that are “high risk” and require approval of a technical audit board before implementation.

Since then, no approvals have been granted, and yet, the industry appears to be growing, said Doug Sipp, a stem cell ethics and regulation researcher at the RIKEN Center for Developmental Biology in Japan. He said China was home to about 100 stem cell companies in 2009.
‍

The Chinese government recognized that the new classification seemed to have a minimal effect, so in January 2012, it instituted an additional set of rules. Organizations that use stem cells must register their research and clinical activities, the source of the stem cells and their ethical procedures.

The health ministry also asked local health authorities to stop any unapproved clinical use of stem cells and created a national suspension of new clinical trials. It also states that patients in existing trials should not be charged.
‍

According to an investigation by Nature Publishing Group, a weekly international scientific journal, patients around China are still being charged thousands of dollars for unproven treatments. In the article Nature published on its website, a spokesman for the Ministry of Health stated that not one clinic has registered in the required way. Yet, clinics continue to offer treatments.
‍

Why is this a problem?

These stem cell clinics openly advertise treatments for diseases like autism, and they promote their websites with individual patient testimonies of those who have had success with a therapy. But many researchers claim that these therapies are not ready for mainstream clinics because they have not been scientifically proven. Rather, the only positive evidence is anecdotal.
‍

The Nature article listed several examples. Shanghai WA Optimum Health Care, located in a wealthy area of central Shanghai, has claimed success in using stem cells from the umbilical cord or adipose tissue to treat a variety of diseases. Tony Lu, a member of the company’s science and technology board, said that four to eight injections of such cells can treat Alzheimer’s disease for about $4,750 to $7,900 per injection.
‍

In addition, the website of Tong Yuan Stem Cell in Changchun states the clinic has treated more than 10,000 patients over the last eight years, all of whom have recovered from their diseases. It states: “For most cases including diabetes, heart disease and liver disease and so on, they can be cured through stem cell therapy.”
‍

Many claim this is false advertising because these treatments have not been proven. The clinics are not publishing data from controlled clinical trials. Oliver Cooper, director of the stem cell facility of the Neuroregeneration Institute at McLean Hospital in Belmont, Mass., spoke to Nature about Tong Yuan’s treatment for Parkinson’s disease.
‍

“The products offered by Tong Yuan may provide anecdotal, poorly controlled, transient improvements in the patients, but Parkinson’s disease patients need long-term therapies,” he said. “There are neither scientific nor clinical data to support the long-term benefits of haematopoietic- or neural-stem-cell therapies for Parkinson’s patients. In fact, it’s not clear if the infused cells will survive for more than a few days in the patients.”
‍

The major concern with all these treatments is that they will lead to serious complications that could make the patients sicker and face even more harmful diseases, like certain cancers. The clinics that Nature approached all said they were aware of the government regulations and agreed they were necessary – but only for clinics that do not practice safely. However, the journal did find one company, Shanghai Puhua, that had stopped offering treatments to comply with government regulations.
‍

The Nature article also suggests that some of these companies promote themselves by claiming connections with leading politicians, scientists and foreign research hospitals and universities when such relationships do not exist.
‍

The issue here is not that stem cell clinics around the world are ill-equipped or staffed with incompetent physicians. In fact, many of them have highly trained physicians from some of the top training facilities. Rather, the problem at hand is two-fold.
‍

First, there needs to be accountability. Why are these clinics not facing repercussions if they are blatantly defying government law? What are the consequences for them, and are they being implemented?
‍

The second and primary issue is about safety. Health ministries are doing what they believe is right for their people. They are creating laws to curb medical negligence and trying to enforce them. But there is clearly only so much a government can do. Patients also have a responsibility for their own health.

They should be cautioned to recognize the possible ramifications of undergoing an unapproved and unproven stem cell therapy. Just because a website claims it has the cure to a disease, don’t just believe the success stories.
‍

Do some research. Ask for the proof. Look for the data in a scientific journal. The offered treatment could very well be legitimate – and it might even work. Just make sure to understand the risks before you put your health under the microscope.

Daniela Abratt graduated in May from the University of Florida with a Bachelor of Science in Journalism and minor in International Development and Humanitarian Assistance. She has previously interned at The Miami Herald and will attend law school at Florida International University in August 2012. She writes for the Medical Tourism Association’s Medical Tourism Magazine and Health Tourism Magazine.