Reusables Give Northwestern Memorial a Sharp Edge on Safety and Sustainability 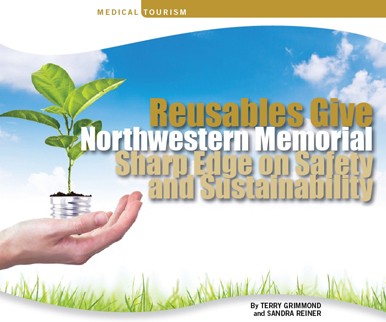 Northwestern Memorial Hospital’s (NMH) commitment to sustainability has gained it Silver status in the United States Green Building Council’s Leadership in Energy and Environmental Design (LEED). Their Green Team strives for sustainability, and recently, in converting from disposable sharps containers (DSC) to a sustainable and safer reusable system, NMH reduced the global warming potential (GWP) of their sharps waste stream by 84 percent.

NMH is a 900-bed acute care hospital in downtown Chicago, Ill. and in 2011 was ranked third in excellence for delivering high quality care among the nation’s academic medical centers as measured by the University Healthcare Consortium’s Quality & Accountability Study.

Hand-in-hand with patient quality care, NMH staff value sustainability and the NMH Green Team, comprised of sustainability advocates from many hospital departments, welcomes any and all ideas that might reduce GWP through energy reduction and waste reduction, reuse and recycling.
‍

By installing timers on public lighting and escalators, we achieved $1.2 million in energy savings.

‍
Environmental Services (Housekeeping) and Catering Departments commonly play a major role in hospitals seeking greater sustainability. Through the initiatives of these departments, NMH has:

The RSC system significantly reduces sharps stream waste tonnage and was unique in having peer-reviewed evidence of sharps injury reduction. Though not common in Europe, RSC are widespread in USA and Australia, where they have been used for 25 years, and are well known in the UK, New Zealand, Canada and South Africa.
‍

Several papers exist on the impact of RSC on waste tonnages, but NMH examined their impact on the hospitals GWP as measured by CO2 equivalent (CO2eq) emissions. Reduction of waste tonnages is a useful yardstick, but it is not as comprehensive as a “cradle-to-grave” life cycle assessment (LCA), which examines the energy emissions required for manufacture, transport, processing and disposal of the containers.

The NMH study examined direct and indirect GHG emissions. All attributable processes were included in the study as recommended by international product LCA guidelines. With regard to sharps containers, a small amount of the CO2eq emissions incurred in their use is directly generated by the HCF. As the study is a comparison of container GHG, the LCA on container contents was excluded as it is identical in DSC and RSC systems.
‍

The tool utilized internationally published impact factors relevant to the U.S. for electricity, gas, transport and fuels, and plastics manufacture data relevant to country of manufacture. Data on number, brand and size of disposable SC for 12 months and data on occupied beds were obtained from NMH records.

The disposal sharps containers were not recycled nor had recycled content. DSC were used for chemotherapy sharps in both systems and included in the LCA. Data on number and size of RSC for 12 months and attrition and replacement of RSC were obtained from DSI.
‍

The study examined direct CO2eq emissions for all life stages of both systems including:

The above life stages were collated into: manufacture, transport, wash phase (for RSC) and treatment and disposal. Results were expressed in metric tons of carbon dioxide equivalents (MTCO2eq).

Because the RSC were manufactured only in year one and have a life expectancy of 500 uses (with a 2% annual decommissioning rate), their manufacturing GHG were divided by their expected lifespan years. Emission totals were workload-normalized per 100 OB-yr and rate ratio analysed using Fisher test with P ≤0.05 and 95 percent CL.
‍

The results showed that to meet NMH annual requirements, 34,396 DSC were manufactured and land filled (32.1 tons plastic) compared to 1844 RSC manufactured (nil to landfill). With RSC use, 30.9 tons plastic and 4.8 tons of corrugated packaging were diverted from landfill and container exchanges reduced from 34,396 to 23,891.
‍

The RSC system provided significant resource efficiency and waste reduction and significantly reduced the GWP of NMH’s sharps containment activities. Washing and transporting of RSC contributed little to total life-cycle emissions when compared to the emissions generated with repeated manufacture of disposables.

The study centers on the GWP of one particular brand of RSC, and the results may not be extrapolatable to other RSC. The percentage reduction of CO2eq emissions with the RSC system exceeds the 2020 reduction targets required of UK NHS Institutions and U.S. federal hospitals and meets the 2050 UK Climate Change Act target.
‍

If RSC were used nationally, we estimate the annual U.S. hospital GWP would fall by 80,000 MTCO2eq. While only a small fraction of the 115 million MT CO2eq generated by hospital supply chain emissions, it is a positive sustainable step.

The study, along with the sharps injury studies mentioned above confirm that, although rare, the combination of safety and sustainability is achievable in sharps safety devices.
‍

Terry Grimmond is an Australian microbiologist with 40 years experience in university hospitals and industry and is an international speaker on Sharps Injury Prevention.

He serves on Sharps Container Standards in four countries and chaired the review of the US Standard. His research also embraces sustainability and Life Cycle Assessments of sharps containers and their impact on healthcare greenhouse gas emissions.

Terry is author of some 40 papers and has spoken at almost 140 assemblies in 13 countries and received the ASM Distinguished Teaching Award, an Australian Outstanding Innovation Award and an ASTM award for his work.

Sandra Reiner is the Infection Control Practitioner at Northwestern Memorial Hospital. graduated from Northwestern’s Wesley-Passavant School of Nursing with a diploma in 1975 and DePaul University with a Bachelor’s Degree in Nursing Science in 1985. She began her clinical career in Neuro-Sciences and Post-Anesthesia Recovery Room as a staff nurse. Sandra was one of the Head Nurses in the Neurosurgical Intensive Care Unit at Northwestern Memorial Hospital from 1979 through 1986 when she began her career in Infection Control and Healthcare Epidemiology. Over the years, Sandra has attended surveillance and epidemiology courses at the Centers for Disease Control and Prevention and has been certified in infection control (CIC).