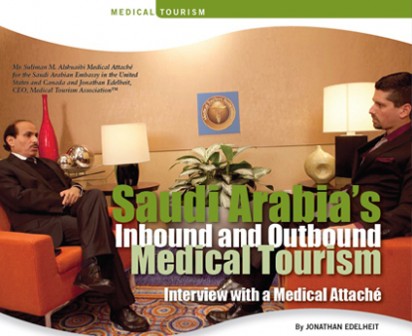 I had the pleasure of interviewing Mr. Suliman M. Alshuaibi Medical Attaché for the Saudi Arabian Embassy in the United States and Canada, at the 4th World Medical Tourism & Global Healthcare Congress which he attended to receive an award for International Healthcare Leadership.

Mr. Alshuaibi is responsible for finding the best care for patients whether it means sending them out of the country or bringing someone in that can provide the required care. Even though all citizens of Saudi Arabia receive healthcare at no cost, some of the more advanced medical procedures are not offered or are not available at the best quality compared to the U.S. or other countries.
‍

So far, inbound medical tourism has not been thriving in Saudi Arabia, lack of promotion, facilities and advanced technology have been some key factors in holding them back as a destination for healthcare.

While many of the local population are sent out of the country for treatment mainly to places such as the U.S., Canada, Germany and Britain, this will slowly start changing as the government has become active in developing the healthcare sector in various ways.  Until this sector is fully developed, Alshuaibi will continue working with the U.S. and Canada to ensure quality care for citizens of Saudi Arabia.
‍

Below, Alshuaibi shares insights of how a foreign government is coordinating care for patients in their country.
‍

How many patients do you coordinate care for?

The number of patients varies, it increases during the summer because it is a holiday in Saudi Arabia, but on average, 250-300 patients are being treated in different U.S. hospitals. Not to many patients travel to Canada, most hospitals there are governmental so most prefer to be treated in the U.S.
‍

What is the process of deciding which U.S. hospital to send patients to?

What are the most common procedures that patients travel to the U.S. for?

Most travel for cancer treatment or transplants such as liver, lung and small bowel.  Patients will also travel for cosmetic procedures, mainly those that have been burned and have scarring.
‍

How long does a patient typically stay in the U.S., and do they come alone?

The patient is required to travel with at least one companion, usually a wife, husband or child. On average patients stay in the U.S. for about three months. If the treatment requires them to stay longer it needs to be approved by the medical authority in Saudi Arabia.
‍

How is the Saudi Arabian government investing in healthcare and hospital infrastructure?

The government is investing a lot of money in healthcare; the budget for just the Ministry of Health is about $10 billion USD. That does not include the National Guard hospitals, Ministry of Defense hospitals and we have 26 universities, most of those have hospitals.
‍

Also, the King issued an order to establish four medical cities which will have between 2,000-3,000 beds and should be ready for operation in about two years from now.
‍

We are also working with University doctors that graduated from Saudi Arabia to have training in the U.S. This will allow us to have more medical facilities and physicians with a higher skill set to treat all types of cases, instead of sending them to the U.S.
‍

Are there many other countries the Saudi Arabian government sends patients to?

We have medical attachés in Britain and Germany, which covers most of the other countries in Europe.
‍

We also have offices for recruitment in the Philippines and India, which is to bring in physicians, nurses and technicians to work in Saudi Arabia.
‍

I would like to thank Mr. Alshuaibi for sharing valuable insights to how Saudi Arabia is investing and developing their own infrastructure.
‍

You can view the live interview here: http://www.youtube.com/watch?v=pEIk52UXKdI