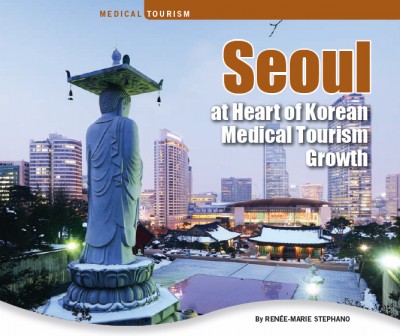 Don’t blame tourists looking for the best buys in healthcare to begin the daunting task with a little Seoul searching. Seoul has become a hotbed for foreign travelers who may be suffering from various ailments or who are looking for detailed health screening and, what might lead to, preventative care down the road. The reasons among tourists typically come down to money and quality of care.
‍

Potential patients can usually find in Seoul a higher standard of care than what is available in their host countries and at one-fifth the cost of treatment in the United States. Throw in endless sightseeing opportunities that blend ancient customs with cosmopolitan culture and, of course, the price is right in Seoul.
‍

The Korean government is well aware of the harvest it can reap, based on the number of fields that patients have sought specialty care including internal medicine, neurology, dentistry, orthopedics and neurosurgery. By last count, the Korea National Tourism Organization estimates that, in 2012, more than 150,000 patients visited the country for treatments and procedures, up from 122,297, in 2011.
‍

Critics sustain that these estimates are just that and fail to differentiate medical tourists from international patients, many of whom may include such as American soldiers and diplomats based in the country or foreign holiday and business travelers and expatriates who happen upon treatment while visiting.
‍

No matter, Korean officials still believe the numbers add up and can be expected to grow to 400,000 by 2018. So, it should come as no surprise that the Health Industry Policy Division is determined to ride this Korean wave – second only to “Hallyu,” the term used to describe and spread the country’s pop culture which continues to make a substantial splash of its own in the region.
‍

“Far beyond the lure of ‘Hallyu,’ Seoul can be appealing for its old-way culture, shopping, traditional forms of entertainment and now medical tourism.”

Renee-Marie Stephano, president of the Medical Tourism Association®, met with participants and industry leaders from 34 countries at the 1st Global Healthcare & Medical Tourism conference, in Seoul.

Far beyond the lure of “Hallyu,” Seoul can be appealing for its old-way culture, shopping, traditional forms of entertainment and now medical tourism. Under the catch-phrase “Medical Korea,” government officials have been supporting programs and initiatives that brand and promote Korean medical services to potential patients abroad.
‍

Korean healthcare systems and technology in treatments for cancer, infertility, plastic surgery, and dental medicine are considered to be equivalent to that in the United States, or even slightly more advanced. A market-research survey of medical tourists last year revealed that 48.4 percent cited “the quality of medical service and technology” as the primary reason for choosing Korea for care.
‍

Products and solutions continue to change how healthcare is delivered in Korea, where diagnosis and external medicine have been extended from the hospital, laboratory and doctor’s office and into patient homes, making outcomes and management models both more effective and efficient.
‍

Of course, Korea has a long and recognized history in skin care, plastic surgery, and oriental medicine and has been, no doubt, a pioneer in the advancement of non-invasive and invasive laser technology. Coined, by some, the Beverly Hills of the Far East, Seoul has become a recognized hub for procedures and treatments that slow the natural aging processes and restore harmony between a patient’s lifestyle and appearance.
‍

Since the government got involved, steps have been taken to strengthen medical tourism within Korea’s borders including the relaxation of visa restrictions related to healthcare, establishment of around-the-clock treatment call centers and one-stop service centers.
‍

The marketing efforts of medical tourism have paid dividend; even where the region abroad was not specifically targeted. Activity, according to the Korea Health Industry Development Institute, indicates an increase in patients from Kazakhstan, Mongolia and the Middle East.
‍

In turn, Korean hospitals are doing their share to transfer medical systems to counterparts in Saudi Arabia. Under a project called the Medical Systems Twinning Project, one of six agreements between the two health ministries, Korea has agreed to establish hospitals – among them for brain imaging techniques and neuroscience research – in the Middle East country and bring educational and management expertise to their medical staff.
‍

Sound Business to Bank On

All of this makes sound business sense, considering business giant Hyundai Engineering and Construction set up facilities some two decades ago in Riyadh, where King Fahad Medical City, a state-sponsored hospital and key beneficiary of the contracted agreement, is situated.
‍

Korean physicians will soon be dispatched to Riyadh and four other cities to demonstrate surgical operations for Saudi Arabian doctors and medical staff, in much the same way the United States administered to the Southeast Asia nation under a similar healthcare package some 50 years ago.
‍

Today, Arab princes and princess are common travelers to Korea for stem cell treatments and others, along with VIP patients from all over the world including Europe, the United States and especially China and Japan.
‍

Korean authorities are banking on these added revenuegenerating efforts related to medical tourism — both at home and abroad – to expand current economic opportunities and stimulate windfalls from partnerships and program sources on the yet-to-be-determined horizon.
‍

The turnabout is a far cry since the “rising dragon” hosted the 1st Global Healthcare & Medical Tourism Conference, in Seoul, and made a debutante-like formal entrance into medical tourism societies worldwide. Sponsored in partnership with the Medical Tourism Association®, the conference attracted industry leaders from 34 countries, the largest presence of healthcare buyers gathered to date, and became symbolic of Korea’s echoed intentions to make medical tourism an engine of national economic growth.
‍

In the time since, Korea has maintained full throttle by punctuating established ties with industry friends like the Medical Tourism Association® while forging new and innovative programs and initiatives with others.
‍

Despite economic uncertainties worldwide, medical tourism in Korea has experienced and survived the growing pains related to any industry worth its mettle. Seoul, in particular, continues to rank among the most powerful economic cities in the world.
‍

Coupled with trusted medical facilities and practices, documented affordability and value, proven infrastructure, and the glitz and glamour associated with both an exotic and flamboyant travel capital, only a Seoul in Korea might be pressed to look beyond the city as a destination for medical tourism.

Renée-Marie Stephano is the president and co-founder of the Medical Tourism Association® and editor-in-chief of Medical Tourism Magazine™ and the Health and Wellness Destination Guide series of books. Ms. Stephano has authored several books from “Developing International Patient Centers, Best Practices in Facilitation,” to “Medical Tourism for Insurers and Employers,” and the most recent, “Engaging Wellness.”