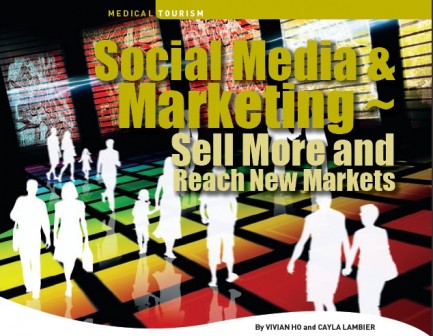 David Finchers film The Social Network which fictionalizes Mark Zuckerbergs creation of Facebook in college has been a huge success in the box office netting $10.3 million as of mid-October. A plethora of books including The Dragonfly Effect by Jennifer Aaker and Andy Smith concerning the same topic are climbing bestsellers lists and flying off the shelves. Social media and the marketing options it creates is one of the hottest topics of the business world and according to Rob Passmore co-founder and CEO of both SurgeryOverseas.com and equals3.co.uk is destined to get even hotter.

The key to social networks is peer-to-peer dialogue: the sharing and shaping of opinion about the reform process Passmore said. The internet on a broader basis offers individuals and patients the opportunity to research learn and weigh options and choices. Choice I believe will be one of the key drivers for the ongoing healthcare reform process and will open up new routes for international healthcare.

As an online market agency focused in international and domestic healthcare we have firsthand experience of how the internet and social networks can be leveraged to generate demand for inbound medical tourism Passmore said.Specializing in generating high levels of patient flow via the internet Passmores company uses a combination of search marketing effective website design & development and social networks to achieve an optimum level of efficient social media marketing.

A current example of Passmores work put into action is a social media campaign he is running for a Mexican hospital focused on the new CCSVI procedure for Multiple Sclerosis. Passmore set up www.CCSVI.mx and with daily posts on the social networks and forums has been able to generate substantial demand very rapidly.When approaching social media from a professional perspective its important to understand who's going to be on the receiving end of marketing efforts.

The younger generations including those in their 30s are very involved with social media  media consumption through online social media outlets is higher than that which comes from television said Passmore. As this population ages their healthcare demands will increase and it is likely they will seek information to base their choices and actions on from online and social media sources.

The international component of social media marketing is also important with certain markets embracing social media more than others. For example mobile phone based social media is very popular in Asia while networks like Facebook and Twitter are huge successes in the United States among other countries.Patient security however must always be a top priority in the medical world and incorporating social media marketing does create new issues that must be addressed effectively and completely.

The digital world is a mixed blessing for patient safety Passmore said. It enables choice and dialogue but it is also largely unregulated. It puts the onus of quality assurance onto the patient rather than the provider. The solution according to Passmore is integration of information between the parties involved.For the past few years social networking as a whole has been transforming personal and professional relationships and these networks have in turn been effective tools in targeting potential customers defining parameters for optimal social networking brand strategies and essentially useful in building better products reaching new market sectors and selling more services.

When the attention is turned to this aspect of social media and the advantages and benefits produced via social media marketing are scrutinized it is found that they are growing and evolving even as the practices are developing. Simply put social media marketing could have as large an impact on the world and healthcare as the internet has been since its inception.
‍

Cayla Lambier is a recent graduate of Washington State University and possesses Bachelors degrees in both Communication with an emphasis on journalism and English. She considers herself to be an incredibly versatile writer with several years of professional experience ranging from reporting and magazine editing to public relations and technical writing. Cayla is currently engaged as an editorial intern with the Seattle branch of Where Magazine and as a freelance staff writer for Medical Tourism Magazine.

Vivian Ho is President of AGHP a 501c3 that works on global health philanthropy ventures. She also serves as Managing Director Asia Pacific for MTA and Co-Editor of MTAs health tourism e-magazine. Prior to this Vivian was President & CEO of Queens International in Honolulu Hawaii building Hawaiis medical travel & health tourism initiative. She currently advises on country sector and organization initiatives in Medical & Health Tourism. She may be reached at Vivian@ MedicalTourismAssociation.com.