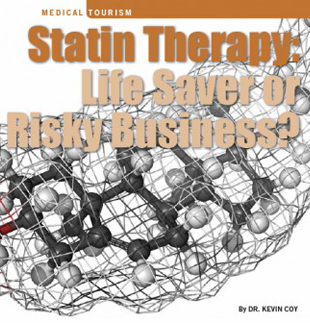 During the past 20 years of my career as a practicing cardiologist, I have witnessed the ravages of coronary artery disease in my patients and in South Florida. Even with available, life-saving medications, patients are reluctant to take them because of an ongoing debate about their effectiveness, side effects and unsubstantiated data.

What is coronary artery disease?

Coronary artery disease, also known as atherosclerotic heart disease, is caused by the buildup of plaque, a sticky sponge like substance that attaches to the arteries of the heart. If too much of this plaque begins to clog the arteries, the heart is forced to work harder to get blood to flow.

Many who live with this disease eventually suffer an acute myocardial infarction, or heart attack. Unfortunately, coronary artery disease is the number one cause of heart attacks in both men and women.
‍

Often, patients never even know they have coronary artery disease until they suffer a heart attack, but symptoms can include chest pain and shortness of breath. The disease has some important risk factors, such as high blood pressure and cholesterol, and diabetes and obesity, which have been shown to be indicators of coronary artery disease as well.
‍

What is a statin?

Luckily, there are medications and therapies that patients can take that not only help alleviate their symptoms, but also decrease their risk of suffering a fatal heart attack. These medications are called statins.
‍

Statins are a type of medication used to lower cholesterol by blocking an enzyme which is a cause of cholesterol production. Like any medication, statins have rare adverse reactions. Patients can develop liver or muscle problems.

There are many statins on the market, but some of the more widely known versions are Lipitor®, Crestor® and Zocor®. Other than their names, every brand of statin works the same – they help inhibit the creation of cholesterol in the body.
‍

Often, patients never even know they have coronary artery disease until they suffer a heart attack, but symptoms can include chest pain and shortness of breath.

Like any medication, statins have side effects. Patients can develop problems with their liver, or muscular problems, but many of these reported risks are low.
‍

Nevertheless, there is a debate on the safety of statins. Even though statins have been used safely for two decades and a number of studies have shown the significant life-saving benefits of this drug class, there is still a debate about whether statins are effective or if their risks are too great.

One study said the medication did not prove to have a significant help for those who did not have a previous cardiac disease, while other studies said the opposite. Yet another study linked statin use to increased diabetes.
‍

Even though statins have been used safely for two decades and a number of studies have shown the significant lifesaving benefits of this drug class, there is still a debate about whether statins are effective or if their risks are too great.

Much of the time, the data from small, outlying studies have been amplified past their true study reaches in order to skew public perception. For example, while many patients in some of those studies have a number of other health risks, many of them would have developed those diseases regardless of statin use.
‍

Sadly, I’ve had many patients who have been scared away from taking this much-needed medication because of fears that are founded in sensationalized studies that have insignificant data.
‍

As physicians, we are trained to synthesize data using the scientific method. We are taught to weigh the information and facts for any treatment and arrive at a conclusion that is based on fact and overwhelming evidence.

To this day, I still use this method when subscribing medications or performing procedures, and we physicians continue to make adjustments to our decision-making process as new information is released.
‍

But, when all data is before us and the evidence still points to the treatment having significant benefits, we will always choose that direction. In this case, there are no doubts that statin therapy has benefits far exceeding the risks.
‍

Dr. Kevin Coy received his medical training at the University of Florida, where he graduated with honors in research and then pursued his cardiology fellowship at the respected University of California Los Angeles – Cedars-Sinai Program.

After completing his cardiology fellowship, he trained with the pioneers of angioplasty, Dr. Richard Myler and Dr. Simon Sterzler, at the San Francisco Heart Institute. Dr. Coy relocated to South Florida in 1992 and, after beginning his private practice, he was the founding partner of Miami International Cardiology Consultants, which he continues to grow.

Dr. Coy has presented papers, both nationally and internationally, and has established cardiac programs throughout the Caribbean. At Doctor’s Hospital in Nassau, the Bahamas, Dr. Coy performed the first cardiac catheterizations and angioplasty procedures as well as developed the cardiac catheterization program. Dr. Coy has served as a visiting teacher throughout the Caribbean including the University of the West Indies. He has participated in training his colleagues in various Caribbean islands, such as the Bahamas, the Cayman Islands and Curacao. Dr. Coy is currently licensed to practice medicine in the Cayman Islands and the Turks and Caicos Islands.

Dr. Coy has interests in both non-invasive and invasive interventional cardiology and has been the co-principal investigator or principal investigator in a number of trials during the past 16 years in South Florida. In 1992, he won the Laverna Titus award for clinical research in Southern California. Dr. Coy has participated in developing and furthering new technologies in the area of cardiology. Besides his clinical research, he continues to practice both locally and internationally. He currently holds medical licenses in the Turks and Caicos Islands, and in Florida and California, where he is in good standing.