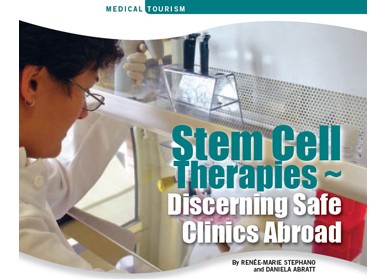 Scientists around the world are studying and experimenting with stem cells in the hopes that they lead to medical breakthroughs and therapies for a number of diseases. This research is covered in ethical considerations, and clinical trials must therefore be held to high ethical standards. So how does a medical tourist know which are safe clinics abroad?

Countries have different laws regarding stem cell research and have therefore approved various trials. It is important for patients seeking stem cell therapies abroad to have a great understanding of the laws of that country and the efficacy of the clinic and safety of its treatments.
‍

What are stem cells?

Unlike ordinary cells, stem cells are unspecialized and capable of renewing themselves through cell division, often after long periods of inactivity. Additionally, in experimental conditions, they can be induced to become tissue- or organ-specific cells with a specialized function.

Because many diseases, like cancer and birth defects, are caused by abnormal cell division, stem cells can be used to understand how and why these abnormalities occur. This opens the scientific door to developing new drugs and treatments for a gamut of illnesses like diabetes and heart disease.
‍

One of the greatest potentials is the use of stem cells to repair degenerative tissues. Currently, transplants are used to replace a failing organ. But since the supply of donated organs is much less than the demand, new stem cell therapies could lower the need for transplants. They could also facilitate the treatment of illnesses like Parkinson’s disease, spinal cord injuries, multiple sclerosis and other muscle damages.
‍

There are two main types of stem cells: embryonic and adult. Embryonic stem cells are retrieved from “blastocysts,” 4- or 5-day old embryos, and are “pluripotent,” which means they have the ability to develop into one of the 200 cell types in the body. This means they can be used for a vast array of functions.

Pluripotent adult stem cells are rare and found in mature tissues like the umbilical cord or bone marrow, so they are harder to harvest than embryonic stem cells. They are also thought to differentiate only into the tissues of their origin. However, if they were taken from the same adult being treated, the chance the patient will reject the treatment is reduced.
‍

What is the controversy about?

There is a huge ethical controversy ingrained in stem cell research. The main point at issue is that the testing that uses embryonic stem cells often has to destroy embryos in the process. This calls into question the ethics of abortion and when an embryo is considered a “living being.”
‍

Opponents of the research argue that harming these embryos is akin to murder, since it is killing potential lives. Many religious and anti-abortion groups believe that life begins at the moment of conception, when the sperm fertilizes the egg, so these embryos should be granted the same rights to life as people have.
‍

Proponents argue that the days-old embryos are still only a cluster of cells when they are extracted for research and become life only at around two weeks when the nervous system begins to develop. They also point out that scientists often use embryos from aborted fetuses and embryos that were created for in vitro fertilization and not used.
‍

How does that affect medical tourism?

The laws involving stem cell research differ from country to country. In the United States, President Barak Obama signed the Omnibus Appropriations Act of 2009 that contains a provision prohibiting federal funding of “research in which a human embryo or embryos are destroyed, discarded, or knowingly subjected to risk of injury or death.” Scientists can, however, use existing stem cell lines.
‍

Because of greater restrictions and lack of certain therapies in the U.S., many people are turning to clinics abroad that offer stem cell therapies. The number of patients who have sought stem cell treatments abroad is unknown. However, the American Medical Association (AMA) reported that experts have described the number to be in the thousands, a mere portion of the 750,000 Americans who sought medical care overseas in 2008.
‍

Recently, some foreign clinics have been marketing directly to patients, claiming to have proven therapies when in fact the treatments are still purely experimental and have not undergone a clinical trial. For example, China discontinued all unapproved stem cell therapies and trials in January and stopped accepting new applications for stem cell programs until July.

Beijing, the city offering the largest number of untested treatments, is not the only city in the country and world to offer therapies with little to no supporting scientific evidence. Reuters reported that experts have expressed concern about hospitals in Mexico, India, Turkey, Russia and elsewhere that provide therapies unrecognized as standard treatment.
‍

A December 2008 study published in the journal “Cell Stem Cell” investigated stem cell clinics’ websites and found that they claimed to treat a range of diseases that go beyond the early evidence on stem cells’ efficacy. They also spoke generously about the treatments’ benefits and downplayed the risks. The study also found that the average price tag for the treatments, excluding travel and lodging costs, was $21,500.
‍

“We’re not presuming they’re all quacks. Maybe they genuinely believe in what they’re doing,” Timothy Caulfield, a study author and the Canada Research Chair of Health Law and Policy at the University of Alberta, told the AMA. “But if the stuff really works, let’s see the data. They need to be as transparent as possible. We need more than just testimonials.”
‍

The International Society for Stem Cell Research (ISSCR) believes that unapproved treatments both put patients at high risk and jeopardize the research process. Thus, it developed a set of guidelines that can be used to judge the efficacy of stem cell clinics and whether the treatments they offer are being developed responsibly.

George Q. Daley, MD and past president of the ISSCR, told the AMA that the guidelines should provide a means of support for legitimate trials and a way to combat corrupt practices.

“Regulators have a responsibility to prevent exploitation of patients in their jurisdictions,” he said, “and where necessary, to close fraudulent clinics and take disciplinary action against the doctors involved.”
‍

Daniela Abratt is completing a Bachelor of Science in Journalism and minor in International Development and Humanitarian Assistance at the University of Florida in Gainesville and will graduate in May 2012. She has previously interned at The Miami Herald and is planning on attending law school in Fall 2012. She writes for the Medical Tourism Association’s Medical Tourism Magazine and Health Tourism Magazine.