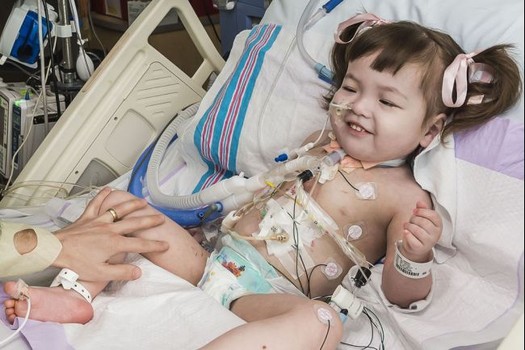 Some might call it a miracle. Others say it's a trachea made of plastic fibers mixed with stem cells. A two-year-old girl knows only that it is breathing life into her tiny body that only a month earlier was given little hope of survival.

Thanks to surgery that connected the transplanted artificial windpipe to her mouth and lungs, doctors say Hannah Warren, who was born without a trachea, is breathing on her own and responding to hospital staff.

Warren, a Korean-Canadian, is only the sixth patient in the world to undergo the surgery and first in the United States to receive the transplant pioneered by Dr. Paolo Macchiarini, director of the Advanced Center for Regenerative Medicine at the Karolinska Institute in Stockholm.

Macchiarini performed the nine-hour operation, April 9, at the Children's Hospital of Illinois, after carefully creating the windpipe using stem cells from Warren's bone marrow that were saturated over a matrix of plastic fibers shaped into a tube. Children born without a trachea are given a 1 percent chance of survival.
‍

Exactly what happens to the windpipe after the transplant isn't clear, but researchers believe that placing stem cells, which are capable of developing into different types of body cells, can pick up signals from their environment and integrate with existing tissues.
‍

Macchiarini told the New York Times that the body's regenerative capabilities may help such bioengineered organs to integrate with existing tissues. Children may make ideal patients for these procedures because they have natural and active abilities to heal and grow.
‍

Hannah's transplant has completely changed my thinking about regenerative medicine, said Macchiarini, who wants to conduct a clinical trial in the United States to properly assess the risks and benefits of the procedure, and document how bodies react to the transplanted devices.
‍

The Food and Drug Administration has approved the transplant as only an experimental procedure. Stem cell treatment is not permitted in most countries, and it is only permitted to some extent in the United States. While research and procedures are somewhat restricted in the United States, scientists from around the globe continue to explore the efficacies of embryonic and adult stem cells with astonishing results.
‍

Now, as the public becomes increasingly aware of these treatments, the demand for stem cell therapies has moved more and more patients from the United States and Europe to travel abroad to seek experimental procedures.
‍

About one in 50,000 children worldwide are born with a windpipe defect or without one. For these patients and others with defective or diseased organs, manipulating stem cells to generate healthy tissues or organs could be their only chance at survival.
‍

Macchiarini performed all five of the previous transplants of the bioengineered windpipes; four of the patients have done well, while another who received his trachea in Stockholm died. Because of the small number of patients he has treated, critics say it's hard to determine how valid Macchiarini's bioengineering technique is in treating patients like Warren.