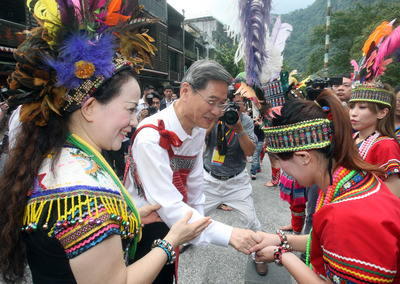 Against a backdrop of increasing trade and travel across the Taiwan Strait and a visit by the highest ranking Chinese official to the self-governed island in more than half a century, healthcare industrialists and entrepreneurs from across the globe concluded two days of talks in Taipei designed to spotlight Taiwan's advanced technologies, quality of services and potential to develop into an attractive international medical tourism destination.
‍

Taiwan today means business, which international healthcare seekers are beginning to define based on the strengths of a medical care system that boasts exceptional performance, inexpensive prices and hospitable service we call this medical tourism, said Renée-Marie Stephano, President of the Medical Tourism Association, who during the Congress, announced a formal agreement with the China Health-Care & Recreation Association to establish an MTA Chapter in Taiwan.
‍

Stephano said the Medical Tourism Association will extend its resources to regional interests and work to strengthen existing initiatives, establish new opportunities and support and encourage leadership, training and certification, and improved care that markets Taiwan as a leading medical tourism destination to the world.
‍

Top-notch medical care that is not only readily accessible, but affordable is something we can all relate to and value, said Stephano. To this end, Taiwan has opened international medical centers in free economic zones specifically designed to attract more medical tourism patients to the island and compliment a healthcare system that is already recognized as the best the region has to offer.
‍

Free economic pilot zones (FEPZs) are designed to open a small part of the Taiwanese economy such as healthcare to outside enterprises by easing restrictions on the flow of goods, people, capital, information and knowledge.
‍

The World Medical Tourism Congress Taiwan 2014 coincided with a visit by Zhang Zhijun, the highest ranking Chinese government official to visit Taiwan since the two sides separated 65 years ago. Some analysts say the four-day trip by Zhang, head of China's Taiwan Affairs Office, signals a willingness by Beijing to begin a political dialogue with Taipei that reconciles tensions and encourages trade between the neighbors who each call a side along the Taiwan Strait home.
‍

New facilities along with loosening of restrictions on both sides of the Strait have created the perfect conditions to extend medical tourism opportunities to patients on the mainland, said Stephano, who noted that the agreement between the Medical Tourism Association and China Health-Care & Recreation Association will include collaboration on a global patient management system intended to streamline medical tourism patients to and from Taiwan and China.
‍

Stephano said the Medical Tourism Association will work with China Health-Care & Recreation to research and collect data that supports transparency in healthcare in partnership with the International Healthcare Research Center, an initiative organized by the U.S.-based non-profit trade association to generate reports based on medical tourism statistics.
‍

Taiwan leaders say it is natural for both sides of the Strait to promote peaceful relations and trade development. More than 8 million visitors cross the Strait each year between China and Taiwan.
‍

While Taiwan commits to improve relations on the other side of the Strait, hospitals across the globe have set their sights on a new population of wealthy Chinese. Nearly 200 Chinese patients traveled to the United States last year for treatment at the Mayo Clinic. One such patient was real estate tycoon Pan Shiyi, chairman of Soho China who checked in for a comprehensive physical examination.
‍

It's quietly and orderly at Mayo, Pan said on his blog site. I had to wait in line before various checkups, but the staff is so nice and patient.

Melissa Goodwin, international department director at the Mayo Clinic who visited China last month in an effort to lure patients to the United States, said Chinese admissions rates have increased steadily in the past five years and by 100 percent in the last two. She said most patients opt for cardiovascular, neurology and cancer treatments. To this end, Goodwin said the Mayo Clinic has launched a Chinese language website and interpretation services.