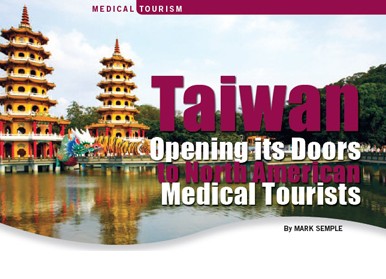 As the global medical tourism phenomenon continues to grow, many countries have begun to actively court international patients.  Several Asian countries like Thailand, Singapore and India have firmly entrenched themselves as leading destinations for high quality, affordable healthcare, and they attract tens of thousands of Americans and Canadians every year. After a late start, Taiwan now emerging as a destination to rival the very best, there are many good reasons why they are an exceptionally attractive destination for the North American medical tourists.
‍

Taiwan is one of the four ‘Asian Tigers,’ a term that refers to advanced Asian countries that have experienced rapid growth over the last several decades. Taiwan has certainly done that, from its separation from China in 1949 to becoming a powerhouse in manufacturing and information technology.
‍

Oddly, when it comes to healthcare, markers are a little less definable. One will not find Taiwan, for example, on the World Health Organization (WHO) ranking for global healthcare. This island of about the combined size of Maryland and Delaware, often called The Republic of China (ROC), is a political anomaly.
‍

It is not recognized by WHO as a separate country, but as a province of mainland China, so its designation often gets lost when comparing it to other ‘countries.’ Of course, Taiwan and China are very different entities with very different political systems, Taiwan having a democratically elected government. Whatever the case may be, it is clear that Taiwan offers high quality, high tech and low cost medical procedures in a convenient, safe and service-oriented destination.
‍

Taiwan does stack up to other Asian countries in terms of healthcare quality. According to a report issued by “The Economist Intelligence Unit” (EIU) in 2000, which evaluated the overall health system performance of industrialized nations based on thirteen indices of health, Taiwan’s healthcare system ranked second in the world, behind only Sweden. Taiwanese hospitals are domestically and internationally quality-assured as the Bureau of National Health Insurance subsidizes them according to accreditation type.
‍

In addition, higher accreditations lead to more medical subsidies and the public perception of superior medical service. Thus, there is a constant drive by hospitals to improve their standard and accreditation status.  To date, there are twelve hospitals in Taiwan accredited by The Joint Commission International, the increasing gold standard in international healthcare.

Furthermore, as a highly prestigious occupation in Taiwanese society, the medical field attracts only the very best students who also often go abroad to study at top international schools. An average specialist in Taiwan will train for 12-13 years before starting to practice, and the top specialists will be recruited by the top accredited hospitals.
‍

This high quality can be seen in a number of specialties where Taiwan is considered a global leader:
‍

Plastic surgery – Taiwan is the only Asian country to receive recognition for Plastic Surgery Innovation from the American Society of Plastic Surgeons, the equivalent of the Nobel Prize among plastic surgeons, which denotes the high standards and quality of plastic surgery by Taiwanese practitioners. Also, 20 percent of cosmetology doctors from Korea, another country noted for excellence in this area, are trained at Taiwan’s Chang Gung Memorial Hospital.
‍

Craniofacial reconstruction – Taiwan has one of the preeminent centers in the region, having treated over 30,000 patients for cleft lip and palate with a 100 percent success rate.
‍

Cardiovascular surgery – The first successful heart transplantation in Asia was performed in Taiwan, and the first cardiac cryosurgery in the world was performed here in 1998.
‍

For a country that is the world’s top producer of many computer parts, one can expect the latest in medical technology, too. Taiwan’s hospitals boast state-of-the art equipment, including volume-computed tomography, MRI and PET for cancer screening, Ar-He cryoablation, gamma knife and cyber knife for tumor treatment as well as image-guided radiation for cancer therapy.  Taiwan is a thoroughly modern, industrialized country offering some of the most advanced equipment available for medical screening and treatment.
‍

As the number one driver of overseas medical care, cost savings are usually a significant determinant in choosing a destination for medical care, and Taiwan offers some of the most competitive pricing anywhere. With cost savings anywhere from 50 percent to 90 percent over costs in the United States, there is a large impetus to travel for Americans and Canadians seeking affordable healthcare.

A knee replacement surgery in a JCI-accredited hospital, for example, that uses the same American-made implant can cost as much as 89 percent less than in the United States.  A heart bypass can be over 80 percent less as well.
‍

Another clear advantage Taiwan has over other traditional medical destinations in Asia is proximity to North America. While a flight from Los Angeles to Singapore, India or Thailand usually requires a stopover and at least 20 hours of travel time, Taiwan can be reached with a direct flight.

As one of the closest destinations in Asia, it offers a clear choice for medical tourists. In addition, most Taiwanese learn English in school, many have lived in and studied in North America and all signs are in English, making this destination even more appealing. It is also thoroughly first-world and extremely safe.
‍

One of the real competitive advantages of Taiwan is the efficiency of its people and processes.  Taiwanese take efficiency to a whole new level, and this translates very well into medical care.  Unlike in some countries where time is not as important, time is taken very seriously here, and an international patient can usually expect to be picked up at the exact time agreed upon.

This is expressed in its healthcare system as well. Taiwan is seen as a model for other countries as its administrative costs for healthcare are some of the lowest in the world. In fact, many countries, including the U.S., have studied the Taiwanese system and the efficiencies therein for an answer to the rising costs of healthcare at home.
‍

As the country has made a play at attracting international patients, some health facilities have emerged as something much more. One example is the JCI-accredited Chang Bing Show Chwan Health Park, which comes off not only as a top level hospital, but also as five-star resort.

This facility has the only IRCAD minimally invasive training center in Southeast Asia, attracting physicians from all over the world, and offers prices on joint replacements and brain tumor treatment like Gamma Knife for almost 90 percent less than the cost in America.

It also offers a whole experience: The hospital boasts a lobby with a piano playing, a food court, shops, movie theatre, art gallery and interactive medical museum for patients. In addition, bicycles are available for patients and their families to explore the surrounding area.
‍

The LOHAS Center next door boasts amenities usually seen in five-star hotels like music therapy, art therapy, aromatherapy and beautiful accommodations for the most discerning tastes.  In all, several facilities in Taiwan offer high level medical care coupled with comforts and amenities far beyond what one would experience at home.
‍

Taiwan has emerged as an economic powerhouse in the last several decades, and now that the government is firmly behind a push to promote medical services in the country, it is only a matter of time before Taiwan is one of the leading medical tourism destinations on the planet.

It certainly has the right ingredients: one of the best medical systems in the world, high-tech equipment that rivals the best facilities in the U.S., some of the lowest costs in the world and a service mentality and holistic approach that put patients’ minds at ease.
‍

Mark Semple is the president of Passport Medical, one of North America’s leading medical travel companies and the winner of the 2011 Leadership Excellence in Medical Facilitation Award. Semple recently returned from a trip to Taiwan and experienced its healthcare facilities firsthand. You can contact him at mark@passportmedical.com.