Talk is Cheap: Telemedicine is Just a Phone Call Away 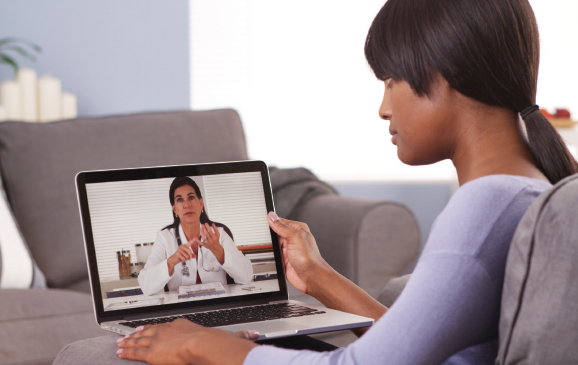 Not unlike any 15-year-old, Nicole Gannon likes to sleep in her own bed. But, unlike many children her age, Nicole requires extensive treatment that makes traveling 700 miles from her home in Emporia, Kan., necessary to meet with specialists who treat burn survivors like her at Shriners Hospital for Children in Cincinnati, Ohio.

Recovery is a slow and tedious process for Nicole that requires reconstructive surgery, rehabilitation, tissue expansion, pressure garments and ongoing checkups because her skin can’t grow and change as quickly as her young body develops.
‍

But, Nicole — the victim of a house fire that left her on the verge of death at just 6-months-old — gets to sleep more nights than she might have expected in her bed at home and doesn’t have to miss any more time away from school. Telemedicine applications, such as two-way video, email, smart phones wireless tools and other forms of telecommunications, enable Nicole to avoid the multiple day trips to Ohio and spend a short time with a doctor instead in nearby Kansas City.

Sometimes it won’t hurt to just answer the phone. Telemedicine — the electronic delivery of medical information from one site to another to improve a patient’s clinical health status — is proving as much.

Listen to chronic sufferers of back, neck and other musculoskeletal pains who now say automated calls are far from annoying, but rather a source of relief from the discomfort and depression of arthritis, cancer and other debilitating conditions.
‍

Researchers found that these 250 patients who received interactive voice-recorded phone calls to monitor their treatment reported greater satisfaction than those receiving standard care.¹ The telemedicine study, conducted by researchers at the Indiana School of Medicine, should come as a reprieve to patients whose pain and suffering in the United States contributes to more than $600 billion each year in lost productivity and healthcare costs.
‍

This latest approach to pain is also an encouraging statement for healthcare providers who are intensifying their efforts to reach patients anywhere in the world in a matter of minutes. More so, telemedicine can be an integral cog in the wheel that can increase the efficiency, productivity and attractiveness of medical tourism procedures – internationally or domestically — by facilitating invaluable dialogue between patient and physician.
‍

Virtual conversations can bridge conventional gaps in medical tourism and give patients a “feel” for what to expect; building confidence and trust in their physicians before traveling overseas. This exchange of important medical information face-to- face can transcend procedures throughout the continuum of care and beyond.
‍

Estimates of the size of the telemedicine industry vary widely — from doctors who are able to expand their business through video house calls to patients who gain access to the world’s best surgical procedures at local hospitals without having to travel.

At least half of all U.S. hospitals use some form of telemedicine. Millions of patients around the world use this approach to healthcare to monitor vital signs and remain out of hospitals and emergency rooms, and both consumers and physicians download health and wellness applications for use on their cell phones.

People inside and outside healthcare are only beginning to recognize the potential of an industry that is expected to grow to $26.3 billion by 2016 and 18.5 percent annually through 2018.
‍

Location is everything and underserved parts often drive telemedicine, which is being further fueled by a predicted drop in the number of physicians – the U.S. will have 91,500 fewer doctors than needed by 2050 – and shortages already in remote areas worldwide. Since 2010, the Affordable Care Act has forced dozens of rural hospitals in the United States to shut their doors. Some 283 more are in danger of closing, according to the Rural National Health Association.
‍

Telemedicine, in this respect, can be life-saving by helping to cut costs and facilitate access and, at the same time, provide consumers with the convenience and experience they crave. The ongoing diversification of telecommunication systems including electronic health records is pushing telemedicine to live up to the promises envisioned. In some cases, the future is already here.
‍

From a console in St. Joseph’s Hospital in Hamilton Canada, Mehran Anvari slices into a patient’s flesh from a distance, not with his scalpel, but from a keyboard in another part of the country where he controls a robot to operate – cutting, stitching and even removing body parts. Despite the distance, Anvari might as well be in the surgical room and not some 250 miles away.
‍

“I have both my hands on the robot the same way I would have instruments in both hands,” said Anvari, a leading Canadian laparoscopic surgeon who uses a robotic camera to serve as his eyes while speaking instructions to both the patient and nurses on site, during a PBS special report. “Basically, it’s the same as if I were next to the patient, just using telecommunications and robotics. It doesn’t feel different.”
‍

So far, Anvari and his robot, called “Zeus, have ruled over more than 20 remote operations – colons and hernias among the repairs – from St. Joseph’s to North Bay Regional Healthcare, a rural community hospital more than a continent away from Strasbourg, France, where the first telerobotic surgery was performed in 2001.
‍

Taking into account the expected slight delays in the transmission of electronic information – even one as small as 20 milliseconds that surgeons must acclimate with — the hope is that, in time, patients won’t need to travel great distances or live in cities with the best to get the best. If those dreams are realized, begin to think then in terms of medical tourism. The possibilities appear limitless.
‍

There is plenty of evidence that supports the advantages of bringing care and education into underserved communities to excite the most pessimistic doctor or patient. But, there’s more to get excited about. What about abbreviated risks of infection, shortened hospital stays and reduced admissions, and systems that enable surgeons to provide emergency procedures to patients who might not survive a long-distance trip to the hospital?
‍

Go then a step further and consider a patient living in San Francisco, where the cost of the average doctor visit is about $251. Imagine if that patient could negotiate an MRI with a physician in Tampa, where the typical price for preventative care is $58? Even the most skeptical of patients who might be contemplating either domestic or medical tourism should be able to see the probable savings.
‍

In many ways, the state of medicine is already somewhat defined in bits and bytes. Telemedicine systems that use mobile phone technology to remotely monitor patients undergoing chemotherapy to treat breast, bowel and blood cancer are not only here, but poised to revolutionize healthcare support protocols.
‍

Place a call to the University of Surry, where researchers hear reports from patients who talk about the side effects of their chemotherapy via a mobile phone. The calls then trigger doctors or nurses who, within minutes, assess their symptoms and determine if specialist intervention is needed.
‍

The need for personalized care is especially critical in Europe where 3 million people are diagnosed with cancer each year. That number is expected to increase by 65 percent over the next 20 years.
‍

Reach Out and Touch

Telemedicine can also be customized to meet personal needs and eliminate barriers to care that once existed –for any given condition — anywhere, anytime. In fact, the National Parkinson Foundation has learned that telemedicine treatments are on par with those available at some of the best academic medical institutions where – in large measure — expertise tends to cluster and practice at sites often too timely and costly to access.
‍

Not Dr. Ray Dorsey, a neurologist at the University of Rochester Medical Center, who, by using a web-based videoconferencing technology similar to Skype, was able to diagnose and treat more than 50 patients with Parkinson’s symptoms, some who were seeing a specialist for the first time.

More than 90 percent of his patients were satisfied with the care they received. What’s more, many patients preferred the telemedicine methods, which allowed them to feel at ease in the comfort of their home while reducing — on average – more than three hours and 100 miles of travel for them per visit.
‍

In time and cost alone, it doesn’t take a virtual house call to diagnose the potential for additional savings. The fact remains that the United States far outspends all other industrialized nations for healthcare – 6 percent more than the Netherlands, the next highest offender.

Those costs, the burden of which is felt by employers and the households they provide healthcare benefits to, is parallel to an enormous level of services offered and delivered – from mammograms to MRI scans – than most Organisation for Economic Co-operation and Development (OECD) countries.
‍

So, it should come as little surprise that U.S. employers, who know any reduction in unnecessary services could curtail medical costs, are beginning to size up telemedicine opportunities either directly or through their insurers to give employees 24-hour access to care.
‍

Aetna and WellPoint are just a few of the insurers that have already jumped on board. For the most part, insurers are finding that a virtual visit to the doctor is not only convenient for the patient, but cost-effective for everyone.
‍

Investors are noticing as well. Start-ups, like Doctor on Demand, the online service backed by Dr. Phil and his son, Jay McGraw, transmit video consultations with physicians in under three minutes from a mobile phone or desktop. Most diagnoses are simple – sore throat, allergies, pink eye — but not yet reimbursable through insurance.
‍

Certainly, there will be some growing pains to iron out before automated healthcare is as simple as letting fingers do the walking. One thing is clear: the impact of telemedicine will redefine urgent care. It already has. Enabling patients to conveniently talk face-to-face with a physician through a mobile device – or undergo surgery via a television monitor – is nothing to shout about, anymore. It’s a phone call away.
‍