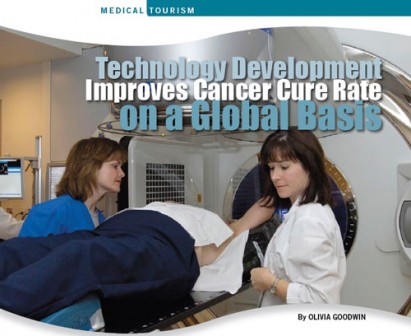 When a cancer patient would come to a hospital for radiation treatment, physicians would use sometimes week old scans of the tumor to direct radiation treatment. In the past doctors didn’t know if the tumor had shifted or grown because they didn’t have the ability to X-ray the tumor prior to treatment. “We were semi-blind in delivering this treatment,” said Dr. Alvaro Martinez, Chairman of Radiation Oncology for Beaumont Hospitals and the initial inventor of the Omnibeam. “Now we can have the “target of the day”, the spatial position of the tumor and surrounding normal tissue, every tumor has normal tissue,” he adds. This technology had improved the cancer cure rate on a global basis.

The idea for this technology developed from the need to reduce the amount of radiation affecting surrounding tissue, they needed to be more accurate when delivering treatment to lessen the side effects, and therefore increasing radiation effectiveness. Computer technology allows the Omnibeam to compare live computed tomography images (CT scans) to previous ones. After comparing images it automatically adjusts the radiation field during treatment to account for a patients movements and natural repositioning of internal organs. A robotic table was developed to move in different directions and position the patient during the CT to more effectively pinpoint the treatment area.

“With prostate cancer you have to find ways to protect the rectum and bladder, with lung cancer it’s the heart and spinal cord,” said Dr. Martinez. This new technology became possible because we developed this machine with Elekta, Inc., they were the manufactures of the linear accelerator and we were the inventors of the CT that’s placed on the accelerator.”

After six years of development from start to finish, the Omnibeam entered full clinical operation in 2007. This form of cancer treatment has improved the cancer cure rate in patients with various types of cancer including; lung, breast, prostate, gynecological, and pediatric. Since the development of this technology the cancer control probability has had an overall improvement in different cancers anywhere from three to 30 percent.

“Even if a certain cancer improved by just three percent, we have improved your outcome, for us even one percent improvement is important,” said Dr. Martinez.

This technology has cut treatment time from 20 to 50 percent, this improvement has been correlated with less side effects. A treatment done in three minutes compared to 10 is going to be more effective, because it is related to motion, if an organ is moving for less time it allows the position to be more accurate.

“The longer it takes the more uncertainties there will be, it is less likely that a patient will wiggle around in three minutes compared to 10 or 15,” commented Dr. Martinez.

Dr. Martinez has worked with patients from multiple countries including; Australia, France, Canada, Brazil and Argentina. Initially, the Omnibeam attracted a large number of international patients that would travel to Royal Oak Beaumont Hospital for treatment. Once the economic crisis hit there was a decrease, but is now improving once again. Treatment is offered in a number of sessions ranging anywhere from three to 40, depending upon the location of the tumor and what sensitive organs are around, some require smaller doses.

With the success of the Omnibeam, it has become a global form of cancer treatment. Two of the three Beaumont Hospitals have it and the third will have it in a month. Multiple countries have incorporated this into their treatment process; Elekta, Inc. produced it and has sold more than 150 of these machines globally. With the distribution of this machine to hospitals around the world, the most advanced form of radiation treatment has become much more accessible and feasible.
‍