The In Vitro Diagnostics Market and the Fight Against Heart Problems 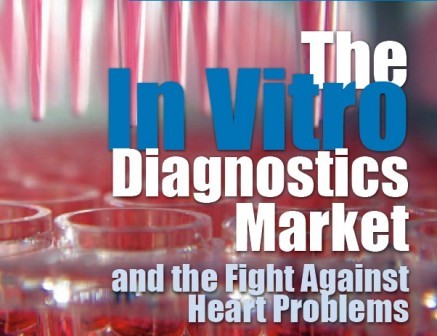 Reducing the time required to diagnose a cardiac event is a key factor in saving the lives of patients with acute heart problems. Recent significant growth in the In Vitro Diagnostics market promises a new generation of technological advances that will include better options for rapid Point-of-Care testing in the US and abroad.
‍

A significant fraction of patients who travel overseas for surgery are doing so because of heart problems. In fact, heart surgery is one of the top five types of surgeries that motivate travel abroad. But this fact begs the question: What happens if one experiences an acute cardiac episode overseas before one has had the chance to undergo one’s scheduled procedure?

The fact is that the amount of time it takes to diagnose a heart attack is currently much longer in foreign countries in comparison to North America. As I will show, new technology is being developed that may finally level this particular playing field. But first, a little bit of background is warranted.
‍

In the time it took to read this article’s headline, someone in New York City will have suffered a heart attack. In those same seconds, a heart attack victim will be released from the hospital with an incorrect diagnosis. Another patient will receive unnecessary, expensive, first-line heart attack drugs. And scores of other victims will lose life-saving time waiting for blood-test results from medical labs.
‍

When it comes to cardiac events and survival, the key factors for a successful recovery include the time required for diagnosis, the accuracy of that diagnosis, and appropriate clinical management. Fortunately for those with acute heart problems, recent advances in cardiac diagnostic testing—a segment of the In Vitro Diagnostics (IVD) market—promise faster results and better accuracy at reduced cost to patients and caregivers.
‍

IVD is the market segment of medical devices that include reagents, diagnostic test products, instrumentation, and related items supplied to both clinical and research laboratories. It refers to testing that aims to identify disease states outside the body (called In Vitro), using samples such as body fluids (including blood and urine) and tissue samples. This is in contrast with testing done within the body, by a scope or inserting a probe to the body (called In Vivo).
‍

Meanwhile, immunoassays are testing procedures that employ specific antibody binding for measuring an analyte in a test sample. Since the mid-1960s, immunoassays have made a major contribution to clinical lab work, and in recent years, they have dominated the IVD product market and represented about a third of all testing in clinical laboratories.
‍

With the incidence of cardiovascular disease on the rise, one variety of biological samples used for testing is whole blood. Proteins released in blood —known as cardiac markers— when the heart is damaged and detected by immunoassays are in huge demand.  Physicians can use these markers to diagnose a cardiac event or to evaluate the likelihood that such an event will occur. Traditional markers for the first of these uses include CK-MB, troponin and myoglobin, while cholesterol is a popular marker for the latter use. With an annual growth of 5%, the world market for cardiac markers is expected to reach $1.05 billion by 2012.
‍

One vital application for cardiac markers is the Point-of-Care (POC) test market, encompassing those diagnostic tests that can be conducted at or near the site of patient care. IVD sales of POC tests include those for patient self-testing; rapid tests used in professional settings, such as physician office laboratories (POLs) and clinics; and rapid tests performed in the hospital. Further POC tests, used for drugs of abuse, are administered in the workplace and within the criminal justice system.
‍

Worldwide, there is still a perception that POC tests are more expensive than lab-based tests. And yet, in the last few years, the professional POC test market has exhibited considerable growth. In 2006-2007 alone, the demand for quicker turnaround time for test results spurred the launch of at least 15 new POC tests and devices, and at least another 15 are near market. The market for professional POC assays is expected to reach $2.77 billion by 2012. Most of this growth will come from increased use of cardiac markers and new assays for cardiac disease markers, as well as those for cancer and diabetes.
‍

Today, physicians are looking to increase the number of tests they can conduct in their offices. Meanwhile, in the hospital setting, there is pressure for more rapid turnaround time and efficient patient management to minimize patients’ length of stay; this provides an incentive for diagnostics companies to develop new POC testing technologies. Evidence for this need includes continued growth in the market for critical-care analyzers.
‍

The Developing Role of Cardiac Markers

As noted above, the market for POC cardiac markers is one of the fastest-growing segments of the IVD industry. As more is learned about cardiovascular diseases and its links to diabetes, lipid metabolism, and inflammation, the definition of a cardiac marker expands. It is expected that medical research will indicate the mix and match of various analytes according to specific cardiac conditions such as stroke, thrombosis, heart attack and cardiovascular risk.

Microfluidics and digital optics are the market enablers for this type of testing. Thus, the development of lab-on-a-chip (LOC) or similar devices that drive lab-quality results will come into play.
‍

The chief cause for POC’s limited market penetration up until now has been the state of the technology involved. Most rapid POC tests are based on qualitative chromatographic techniques with results that are detected visually. However, as imaging and computational capabilities have improved, there has appeared a significant trend within the diagnostics industry to replace visual detection with digital and instrument-based methods.

The goal of LOC devices is to progress from obtaining a biological sample to obtaining a result in one easy step, by placing the sample in the device. Each LOC could feature full calibration and quality control capabilities as well as built-in connectivity. This means that users would not require specialized training to conduct a patient test, and once results are obtained, they could either be stored on the LOC or uploaded and stored on the health care provider’s own computer.
‍

The Future of POC Immunoassay Platforms

In the context of POC testing, the key to the diagnosis of heart problems and other ailments is to measure the difference between normal and abnormal concentrations of potential disease markers. At the present time, most immunoassay technologies in routine use for POC do not have the sensitivity required to detect many disease-specific markers.

Thus, new ultra-sensitive test methodologies are needed to allow for detecting these markers for cardiac disease, as well as other conditions. Immunoassay developers are on a continuous hunt to discover technologies that can detect nano-, pico- and even femtomolar concentrations of proteins in clinical samples.
‍

The demand for automated benchtop and compact immunoanalyzers is the impetus for the ongoing development of several new instruments. Many of these systems are designed for POC testing, but they are also well-placed for use in small labs. Many of the new systems are being developed by major IVD companies, but most are the brainchild of smaller companies that will be looking for commercialization partners.
‍

If and when the next generation of rapid Point-of-Care immunoanalyzers is put on the market and adopted on a large scale, they could potentially provide heart patients with the hope of a brighter and healthier future.
‍

If and when POC immunoanalyzers are sold abroad—which is the plan envisioned by the most prominent North American developer of this technology—the effect on medical tourism will likely be significant. No longer will heart patients need to fret about lack of timely diagnosis when suffering a possible cardiac episode prior to undergoing their scheduled procedure in a foreign healthcare facility.

The dilemma described in the first paragraph of this article will no longer be a concern, because the time required for accurate diagnosis will be rapidly reduced and roughly equalized everywhere. That same North American developer reports receiving numerous enquiries from foreign healthcare providers wishing to learn about distribution of the technology.

With global interest obviously strong, it is safe to speculate that, in the near future, POC immunoanalyzers will be in place around the world, making foreign travel for medical procedures even more sensible.
‍

Dr. Yahia Gawad is the founder, CEO and director of CardioGenics Inc. He has worked extensively on cardiac diagnostic test products that he has taken from concept and bench development to commercialization through regulatory approval processes. Dr. Gawad can be reached at 905-673-8501 or info@cardiogenics.com.