The Missing Piece- Language Translation for the Target Market 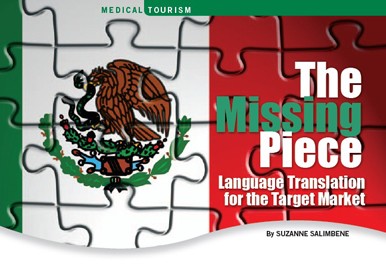 In his new book on the Mexican national character Mañana Forever?, Jorge Castaneda not only describes aspects of the country’s personality that Mexicans can readily identify with, but he also explains the history and reasons behind these traits. The former foreign minister and candidate for president of Mexico has been trying to assist Mexican hospitals and private practitioners in the state of Jalisco to achieve their very great potential not only in the medical tourism industry, but also the health and wellness and the retirement industries.

The book, which means “tomorrow forever” in English, holds many answers regarding the self-inflicted roadblocks to Mexico’s success.  A description of a few of these national characteristics may help other nations entering this rapidly growing industry to avoid many of the pitfalls that have kept Mexico from realizing its potential in this field. It may even help Mexico turn the character corners that Castaneda believes are necessary for achieving present and future success in the endeavor to attract international clientele.
‍

Private hospitals in Mexico hold probably the best tools for attracting large numbers of Canadian and American patients to Latin America. They are clean, modern, offer the best medical technology and are staffed by highly trained physicians. Treatments usually cost anywhere from 10 percent to 70 percent less than in the United States. Also, transportation to Mexico from the U.S. is not only cheap but also usually direct from most large cities, and travel time is minimal.
‍

Mexico, with its wonderful beaches and tourist attractions, is a wonderful place to combine healthcare and tourism. It offers sites and experiences to fit everyone’s taste — beautiful beaches and beach resorts, fascinating archeological sites and wonderful colonial cities with a number of free and low-cost cultural events that could overwhelm even the most avid “culture vulture.” Additionally, the hospitals that cater to medical tourists are located in cities that are safer than American cities of equal size.
‍

So what is missing?

Why has Mexico not attracted more than a small percentage of the growing numbers of North Americans seeking medical care abroad? Most medical tourists who come to Mexico are Mexican-Americans, Americans who have made previous visits as tourists and a few who have done independent research about lower medical costs.
‍

Castaneda offers some clues in his analysis of “why the very national character that helped forge Mexico as a nation now dramatically hinders its search for future recognition in the global economy.” He describes Mexicans as highly individualistic, for example, they are better at individual sports than team sports.
‍

One corporate aspect of this form of individualism is exemplified in the State of Jalisco’s formation of a 12-hospital medical tourism association, which has recently renamed itself a “cluster” of hospitals working together to promote medical tourism.
‍

Furthermore, my own observation in following this group for the past two years is that individualism (and even competition) in thought and action still reigns between the individual members of this loosely connected group. Each hospital, in spite of its membership in the “cluster,” seems to be going its own way in deciding upon and advertising which treatments and services it provides to medical tourists.

However, each is doing so with websites that are almost incomprehensible both language-wise and concept-wise to the North American patients they wish to reach. Both the group and the individual websites demonstrate little knowledge of the types of treatments that foreigners might seek outside their own borders and little understanding of the American world-view and values to which they should direct their marketing.
‍

Castaneda emphasizes Mexicans’ fear and mistrust of foreigners and their belief that they can accomplish all things on their own, without foreign assistance or training. This is strikingly clear in Mexican healthcare’s very inadequate attempt to reach English-speaking patients.

One aspect of Mexicans’ wariness of foreigners is that most Mexicans fail to “look outside” their national boundaries by learning to speak a foreign language. While they want to attract foreign business, they either don’t want to make the “concession” to these foreigners of learning English or they fear the “embarrassment” of addressing foreigners in a language in which they are not perfect. Unlike most business people seeking international clients, they place the responsibility for communication upon those whose business they seek.
‍

In most of the hospitals I visited in Jalisco that have expressed their interest in medical tourism, neither the administrators responsible for growing medical tourism nor the physicians speak enough English or know enough about North American culture to effectively attract patients or care for them in the manner these patients need and expect.

Mexican nurses, who receive less education and are given less responsibility than North American nurses, rarely speak any English at all. Lack of English or knowledge of North American culture and service expectations not only hinders the medical aspect of medical tourism (according to the U.S. government and JCI standards, no care can be considered quality care unless there are effective and appropriate communications between patient and caregiver) but also the combination of the two.
‍

Guadalajara, the second largest city in Mexico, boasts Tourism Information kiosks all over the city. However, even the department of tourism has not made any provision for non-Spanish speaking tourists. Speaking a foreign language is not required of the employees that work the kiosks nor is the tourist information printed in other languages.

It is also interesting to note that, in an article published last year in the Guadalajara Reporter – the city’s English-language newspaper – that listed the best and worst paid jobs in Mexico, nursing was the least paid job (earning about the same as domestic help), and tourism was the second.
‍

In spite of admitted weakness in English, hospitals, wellness and retirement centers rarely seek the aid of native speakers or those familiar with U.S. or Canadian culture to prepare their websites — they often rely on free automatic web translations that are so poor, a knowledge of Spanish syntax and ability to translate back into Spanish are necessary for even the most general comprehension.

Is it a matter of money, or is it an unwillingness to admit that foreign assistance is needed? It might also be a matter of good intentions but poor follow-through and attention to detail. But, it is also that “mañana” attitude Castaneda refers to in the title of his book.  Probably it’s a little of all of these things.
‍

The above comments are not intended to ridicule Mexico’s attempts to develop and grow its medical tourism industry.  They are intended to illustrate how easy it is for a country with attractive tourist sites equipped with world-class hotels, excellent physicians, clinical facilities and medical technology can flounder in its efforts to promote medical tourism because of a lack of the “auxiliary” tools and knowledge that are often ignored by both government tourism departments and the medical facilities themselves—the ability to communicate clearly and appropriately with their targeted audiences. Without these tools, they cannot convince their audience of their ability to provide top quality medical care in the language(s) of their patients.
‍

There is a saying that “beauty is in the eye of the beholder.” The prospective client’s view regarding the medical and technical excellence of a country or an individual medical center will be based upon the client’s interpretation of what is said to attract him/her, how well it is said on the hospital’s website and his/her evaluation of  the services offered and received.
‍

The medical tourist patient begins to form an opinion of the quality of care he/she receives through a culturally based interpretation of what that client sees at the moment he or she enters the facility. Are there signs in his/her language? Are the receptionists able to give information in a linguistically comprehensible and culturally appropriate way?

Are forms and informational materials in the patient’s language, etc.? Then, it is solidified, both through the institution’s ability to meet culturally formed needs, values (including a definition of “quality care”) and the ability and ease of communication with caregivers and staff.
‍

Too many hospitals in too many countries see these things as mere details, but these are the details that either attract or repel perspective patients. And, the details, combined with successful outcomes, determine patient satisfaction. They are details that often determine the realization of either a medical organization’s or an entire nation’s potential to succeed in the field of medical tourism.
‍

Suzanne Salimbene, PhD., is the president of Inter-Face International. Now a permanent resident of Guadalajara, Mexico, Dr. Salimbene has been an authority on in Cultural and Linguistic Competency in the United States since 1993. She has helped hospitals and their physicians and nurses understand the needs and expectations of foreign patients and adapt their physical and medical environment to better care for their needs.

She has now brought this expertise to Mexico and offers training and consulting to private hospitals, clinics and private practices in developing the marketing techniques, language skills, and cultural practices to help Mexico increase its well-deserved share in the very profitable Medical Tourism Marketplace.

She is now assisting several hospitals and retirement community developers in creating English-language web sites and printed materials that will attract U.S. and Canadian clients.

Dr. Salimbene’s new Mexican Medical Tourism website is www.interfaceinternational.com.mex , her U.S. Cultural Competency website is www.inter-faceinter.com  . She can also be reached by phone—either via her U.S. number: 815-282-2433, or her Mexican number: 33 3165 0069.