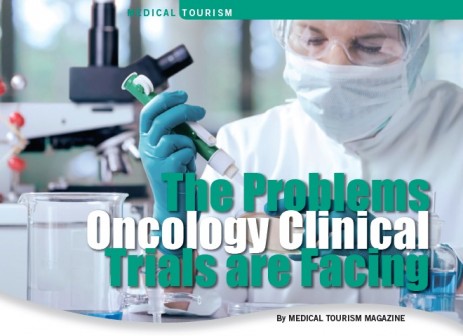 One of the hardest things for any patient to face is being told by their doctor that they have cancer. The patient feels the entire gauntlet of emotions; they will feel scared, angry, depressed and alone. They are faced with a tough challenge ahead of them: chemotherapy, or radiation, or even a combination of the two. Their bodies will become weak; they will lose their hair, their weight, their appetite. They do not know what will happen in the future with the medical treatments that we are all familiar with, let alone some new drug or treatment that is still in the trial phase; why risk it?

It is this line of thinking that is causing many problems for doctors conducting oncology clinical trials. They are just not receiving enough patients to make useful studies. It is estimated that only 2 to 4 percent of patients diagnosed with cancer take part in clinical trials, as was discussed at the recent Clinical Operations in Oncology Trials conference which was held July 18 and 19 in Boston, Massachusetts.
‍

The reason behind these low participation rates is not just fear of the unknown. The scientific process is an exacting and rigorous process requiring the placement of patients in different groups, namely a control group, which is given a placebo and a treatment group.

This must be done randomly and without the doctor nor the patient knowing which group the patient is in. This is a large cause of trepidation for the patient for many reasons. The first of which is the fear of being placed in the placebo group, meaning they will not receive the treatment they need.

Why risk not receiving any treatment in an oncology clinical trial when they can be guaranteed treatment if they stick to the commonly held practices?
‍

The second reason is the overall lack of transparency within the clinical trial process, particularly not knowing if they are receiving treatment or what the experiment is testing specifically. The third barrier coupled with the fear of the unknown and that is the fear of any unidentified, dangerous side-effects.

The fourth and final obstacle to participation is the reluctance to receive treatment from an unknown clinical doctor rather than the patient’s primary care physician, a doctor the patient has known for a while and has a rapport with.
‍

In the recent Clinical Operations in Oncology Trials conference, the delegates discussed the issue of smaller patient pools for clinical trials. There are other issues beside the obvious problem of having fewer trials for new cancer drugs because of less people.

With fewer people, the ones who are willing to take part in these trials are fought over by the different groups conducting these trials. The competition becomes bitter, and these trial clinics need to be aware where their competitors are conducting their trials to avoid targeting the same area, to keep their own trials free from people participating in both studies, which would cloud the results.

Another consideration is the approval and entrance into the market of new drugs and treatments, which cause patients who were open to the idea of a clinical trial to change their mind in favor of the fancy new drug.
‍

One of the proposed ways of combating this down-turn is through education, not only for patients but for doctors as well. This education for doctors is critical because in most treatment of cancer patients, the decisions are made by joint patient-physician decision-making.

One group that seeks to educate physicians is Dava Oncology. Dava hosts workshops for doctors, which last three to four hours. The workshops begin by the attendees presenting the demographics of their location, which includes information like “standards of care, referral patterns and accrual potential to their peers,” as stated on the company’s website.

The attendees then are asked to present case studies. These Accrual Workshops are an effort to help the doctors understand the field better and ultimately to help create better drugs to fight cancer.
‍

The patient side of education cannot be ignored however. It is, after all, the fears of the patients which are causing the low numbers and education on the subject will help. The Clinical Operations in Oncology Trials conference discussed in length the idea of using social media as a means to educate the populace about clinical oncology trials.
‍

By using websites like Facebook and Twitter, the delegates hope to give patients better quality information about these trials. This is a sound strategy to take because it provides the maximum amount of exposure and information at a minimum cost.

The only trouble with a social media approach is that it will have a difficult time reaching and targeting older people, who are less likely to use these social media sites. There is also little guidance from the FDA in terms of advertising on social media.

In 2009, the FDA held hearings on the efficacy of social media where it issued draft guidance on “responding to unsolicited requests for off-label information about prescription drugs and medical devices.”

Thus the sponsors and Contract Research Organizations (CROs) are reluctant to implement this kind of strategy, one poorly phrased sentence or a typo could ultimately lead to charges of coercion which is a risk no one wants to take.
‍

Although there is a lot of fear for patients who are fighting cancer, these fears are limiting the research that can be done to help in their fight against it. No one wants to be the proverbial guinea pig, but these patients are needed to help doctors better understand how cancer works and how to fight it, which hopefully will someday turn into a method to cure it.

By educating both doctors and patients about how clinical trials work and their importance, one day the number of patients participating in these clinical trials may improve and will eventually enable those suffering from cancer to get the help they need. This will be the day that clinical trials will no longer be needed, but until then we must continue to use every avenue possible to get as much information as we can.
‍