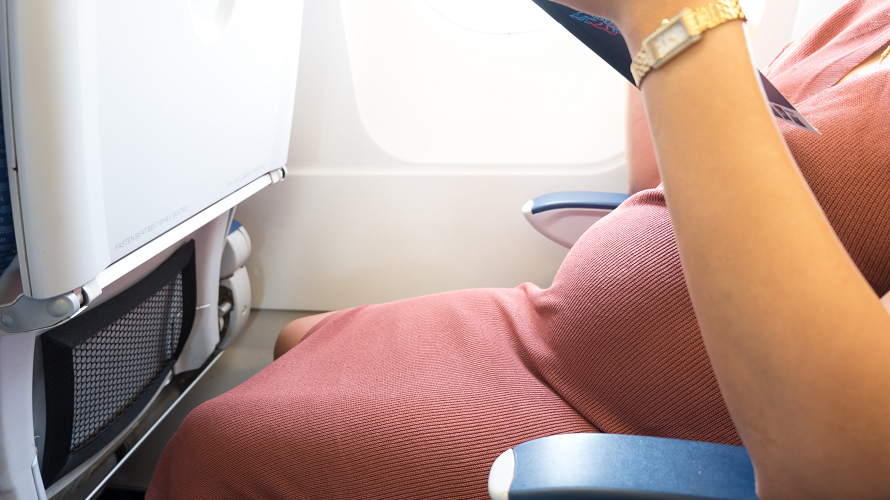 The Trump administration is imposing a new visa policy restricting foreign nationals from giving birth in the US so their children can become American citizens, a practice that has been termed “birth tourism”. This new rule, which takes effect on Friday January 24, is one of President Donald Trump’s prime political concerns.

‍
The White House made this announcement Thursday that the State Department “will no longer issue temporary visitor (B1-B2) visas to aliens seeking to enter the United States for ‘birth tourism.’” Under this new rule, pregnant women will be denied a tourist visa if the consular officers determine that they are visiting the US primarily to give birth. However, this amended State Department regulation does not apply to foreigners from the 39 countries that are part of the Visa Waiver Program.


For those to whom this new rule applies, the policy comes with a caveat - and a bigger hurdle for consular officers: pregnant applicants may only be granted tourist visas if they can prove that they must come to the US to give birth for medical reasons – or another compelling reason - and not just to have a coveted American passport for their child.

‍
But the problem for officers is proving that a pregnant foreigner is visiting the US primarily to give birth in the country.
‍
Officials at the State Department say that the consular officers will not ask female visa applicants of child-bearing age if they are pregnant or not or whether they intend getting pregnant. Rather, the officers only need to ask the question if they have sufficient reason to believe that the applicant is pregnant or planning to visit the US to give birth.


The officials say the consular officers will rely on visual cues, such as a baby bump, or listing a medical procedure as a reason for the visit as sufficient reason to ask such questions.

‍
Those with a medical reason necessitating birth in the US will be treated like other foreigners seeking medical care in the US, having proved that they have the financial means to pay for everything required for the medical trip, including accommodation and transportation. Pregnant women with other non-medical, but compelling reasons, such as visiting an ill loved one or attending a business event, may also be granted visas.

‍
Birth tourism has been an age-long practice, with thousands of foreign women traveling to the United States primarily to have their children born on US soil and express citizenship rights for such children. This has become a business for several US companies that act as middlemen, facilitating the travel process and liaising with healthcare professionals and hospitals to take deliveries of the babies and provide care for the mother and the baby. This often comes at an overpriced fee for these foreign women, making it a lucrative business for these agencies.
‍

The Centers for Disease Control and Prevention estimates that there have been around 10,000 births to foreign women every year in the last few years.  Most of these women come from Asian countries especially China and Taiwan, pay for birth tourism packages that offer lodging and medical care throughout their stay in the US, and secure US citizenship for their newborns.

‍
Although, this practice is fundamentally legal, it is fraught with a few problems such as visa fraud and tax evasion by operators of birth tourism agencies.

‍
The Trump administration since its inception has clamped down on all forms of immigration, with one of Trump’s prime concern in this area being birthright citizenship. While the constitution declares anyone born on US soil a citizen, Trump had threatened to get at this by restricting birth tourism all together.

‍
According to the new rule, the State Department says it does “not believe that visiting the US for the primary purpose of obtaining US citizenship for a child is a legitimate activity.”

‍
In its effort to limit this form of immigration and citizenship, the Trump administration has sought legal action against agencies and companies that exploit the ‘birth tourism’ industry. Last year, the Department of Justice charged three individuals with operating multimillion-dollar ‘birth tourism’ agencies that facilitate childbirth for Chinese women in Southern California. These agencies charge the pregnant women between $15,000 and $50,000 to give birth in the US, according to a statement by the US immigration and Customs Enforcement.

‍
However, this clamp down on birth tourism predates Trump. In 2013, authorities in Los Angeles closed 14 birth tourism “hotels”, discouraging lodging services and birth tourism packages for foreign mothers-to-be. In 2015, Federal agents in Los Angeles investigated and ruled on series of cases involving three birth tourism companies, which they describe as producing the “biggest federal criminal case ever in the ‘anchor baby’ industry”.

‍
Officials of the State Department assert that this new rule will put an end to these activities without contravening the legitimacy of birthright citizenship.

‍
However, critics – and proponents alike – of the rule have pointed out the cracks in the policy and its possible challenges.

Jonathan Edelheit, Chairman and Co-founder of the Medical Tourism Association, in an interview with National Public Radio, says although the policy is aimed at weeding out mothers-to-be who abuse the opportunity to give birth in the US by being dishonest about their purpose for visiting, it may also affect those who truly need life-saving treatments in the US.

Edelheit noted that the caveat, which requires mothers-to-be to prove their ability to pay for their medical services, may causes unnecessary delays in accessing care in the US, potentially risking the lives of the mother and the baby.

"Making a broad-sweeping regulation without thinking about the consequences of who it hurts is not well thought-out," Edelheit noted. "If someone is coming into the US because they need a life-saving procedure for their baby and need to give birth in the US because that care isn't available [in their home country], their application will be denied, and that will be a death sentence for their child in that country."

‍
Sarah Pierce, a policy analyst at the Migration Policy Institute posits that the policy is not an effective way of going after the ‘birth tourism’ industry since most women do not mention that they’re intending to visit the US to gain citizenship for a child.

‍
Furthermore, Pierce says these types of tourist visas are usually granted for up to 10 years, so women could visit the US long before they become or intend to become pregnant.

‍
US Representative Alexandria Ocasio-Cortez describes the rule as an unnecessary discrimination against women. In her tweet, she said “Pregnant Women. This is administration is now targeting pregnant. Women.” She went on to say that the “cruel” rule targets the most vulnerable group – pregnant women.

‍
Several ‘birth tourism’ companies remain unperturbed by the new policy and have expressed their various opinions. Elena Balmiler, the founder of Florida-based firm AIST USA, which facilitates birth in the US for pregnant Russian women, says it is business as usual. She notes that she still receives several queries on birth tourism in the US and “not a single person has changed their mind to fly to the USA because Trump plants to stop [birthright] citizenship.

‍
As thenew rule takes effect today, pregnant women may have to rethink plans of having their babies in the US and consider other countries to avoid complications from delays that may arise as a result of this new policy. However, while it is uncertain how long this restriction will last and the scope of what qualifies as a “compelling reason” to travel to the US for birth purposes, foreign mothers-to-be should do their due research before paying any ‘birth tourism’ agency.