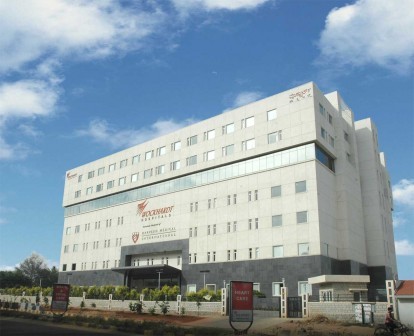 It is a type of surgery that even hi-tech hospitals and experienced surgeons in the country are not confident of undertaking – combination surgeries involving complex procedures. But chief cardiac surgeon, Wockhardt Hospitals, Dr. Vivek Jawali has created history of sorts by conducting such surgeries in a routine manner for the past 15 years.

And now, the team led by Dr. Jawali has reached new heights by successfully conducting a beating heart bypass surgery along with gall bladder removal through the minimal access method.
‍

The patient was in her mid-70s, was obese and had a life-threatening condition of the heart. Along with that she had gall bladder stones that were causing her immense pain. Her situation was indeed tricky: the triple vessel coronary artery block made it impossible for her to undergo a gall bladder surgery, and if she underwent a bypass surgery first, she wouldn’t be able to get her gall bladder removed for a couple of months.
‍

The best option for her was to get both the problems corrected at one time. And that is precisely was Dr. Jawali and Dr. Shabeer Ahmed, GI and laparoscopic surgeon, Wockhardt Hospitals decided to do. Explaining the rationale behind the surgery, Dr. Jawali says, “Had we conducted the bypass first, she would have had to wait for 2-3 months for gall bladder removal.

After a bypass surgery she would be put on blood-thinning medicines which would make it risky for her to undergo another surgery. We couldn’t have removed her gall bladder first because she of her weak heart, poor contractibility of heart vessels, obesity and advanced age.”
‍

Another big advantage of a combination surgery is that everything is over at one go. That means the patient has to take anesthesia only once and the strain on the family is also just once. It is also less expensive than two surgeries separately.

“Cardiologists have been staying away from combination surgeries because of the misconception that the risks are more enhanced. But that is not true. We have so far conducted over 100 such surgeries and the published two papers in scientific journals. Our track record has been excellent: zero mortality, no major case of infection and less morbidity,” says Dr. Jawali.
‍

GI and laparoscopic surgeon Dr. Ahmed says such combination surgeries could not have been possible had it not been for the infrastructure and clinical expertise available at Wockhardt Hospitals. “Let alone in India, such surgeries are unheard of even in the West. I’m thrilled that we have been able to something like this in India and create valuable medical research for others to follow.”
‍

“Besides the physical infrastructure, such a surgery requires precise clinical skills because the margin for error has to be zero. The role of the anesthetist is also crucial in surgeries like these (minimal access) where the patient is awake during the procedure. Wockhardt Hospitals have all these specialists under one umbrella and that’s the reason we have been able to do such path-breaking work here,” explains Dr. Ahmed.
‍

One of the first prominent cases of combination surgeries at Wockhardt Hospitals Bangalore was that of a young pregnant lady with a heart condition. That was around 10 years ago. She was in the end stage of pregnancy and was collapsing due to a deteriorating heart valve. At the time of her Caesarean-section, doctors also performed an open heart surgery to replace the valve.
‍

Another case was that of a middle aged lady with a severely bleeding uterine tumor and a complex and severe aortic root leak for which she required both a uterus removal and an aortic root replacement surgery. Both were complex procedures and had to be done at a time. Her heart was failing but correcting her heart first would have been disastrous because of the blood-thinning medicines. These medicines would have worsened the condition of her bleeding tumor.
‍

Dr. Jawali’s team at Wockhardt has conducted various types of combination surgeries along with open heart surgeries, like surgeries involving glands, bones and joints, spleen, etc. But it was for the first time in the recent case that doctors had conducted a minimal access surgery along with that of an open heart. Five days after this surgery, a similar surgery was conducted on a middle aged banker. “With minimal access surgery, the scope of combination surgeries has increased. Morbidity for the patient is now less than in a surgery which involves two open surgeries,” adds Dr. Jawali.