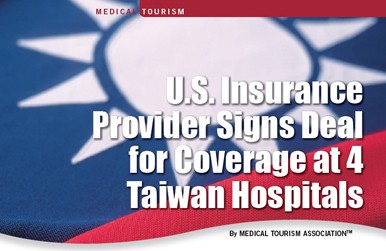 Four local Taiwan hospitals signed an agreement with a U.S. insurance provider to supply medical services for American policyholders when they seek treatment in Taiwan.

‍
Central News Agency (CNA) channel, Focus Taiwan, reported that Department of Health senior official, Hsu Ming-jen said in a press conference that this first of its kind agreement represents a cornerstone of Taiwan’s medical tourism and will heighten the country’s visibility in the U.S. Ming-jen said the new cooperation model is a sustainable one and will bring more overseas patients to Taiwan, particularly those of Asian descent.
‍

The agreement was signed by top executives at the four hospitals and NELIC founder, Bill Shun-zer Chen, who is also president and chief executive officer of the Houston-based group.
‍

“Chen said the joint insurance and medical services will be offered with the support from the Cabinet-level Department of Health and the Overseas Compatriot Affairs Commission (OCAC) for international medical services,” reported The China Post.
‍

Chen, a Taiwanese immigrant, explained that the new product, which is designed for customers who can speak the Chinese language, is expected to be sold to 1 percent of the total 20 million Asian Americans, and will serve the needs of Asians who can make a stopover in Taiwan en route to their home countries.
‍

The New Life insurance policy helps American customers, including Taiwanese who hold U.S. passports, obtain adequate services and lessens the burden of costly U.S. medical bills. American policyholders will have access to medical treatment in the U.S., but will likely incur a higher portion of out-of-pocket medical expenses because of the much higher medical costs in the U.S.
‍

Chen said that this new opportunity will allow policyholders to receive sufficient compensation for their medical expenses at the four participating Taiwanese hospitals in addition to adequate funds for travel-related costs (i.e., air fare, etc.) for themselves or families. The contract also provides compensation for services such as physical examinations and cosmetic procedures, which Chen said is uncommon in most insurance policy agreements.
‍

Given the limited results from local hospitals trying to develop medical tourism, Focus Taiwan reported that vice superintendent at Changhua Hospital, Chen Hsiu-chu, said she is confident the agreement will help boost the number of foreign patients and open up the medical tourism market in Taiwan.
‍