US HEALTHCARE REFORM (OMG!) It's time for Business Owners to get Creative! 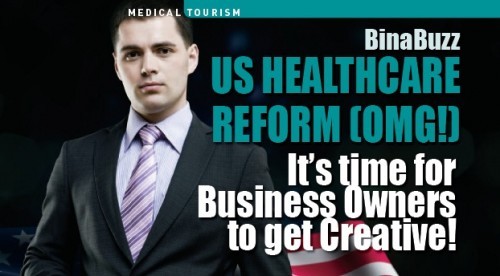 In the dead of night; under the cover of Christmas, the US Government dropped its Healthcare Reform Bomb on an unsuspecting people – its own!

A swift, surgical strike and the government nuke knocked out a (VERY) high-value target: The US Healthcare System. NO one in the US was left untouched; NO one spared! The ObamaBomb dropped an ‘S-load of new taxes, new regulation, new paperwork AND total tumult on US businesses – and employees.

Fallout also covered CEOs and Business Owners, too – their families as well. So, Now what?

It’s time to get Creative!

Harvard Business Professor Regina Herzlinger – who bravely fought against a government takeover of healthcare in her book: Who Killed Healthcare? – said NO government-run healthcare system has your family’s best interest at heart. If government gets its grubby mitts on healthcare (and healthcare financing), we’re all dead, she said.

“A system controlled by government will kill us financially and medically; it will ruin our economy; it will deny services; it will undermine the important genomic research that can fundamentally improve the practice of medicine and control its costs. The American People must win this battle,” she wrote.

Unfortunately: GOV wins = YOU lose! It’s time to get Creative.

When it comes to your health – and the health of your family – CEOs must come down off their 30,000-foot level and get grounded in the health emergency that’s been dropped in their lap. Today/Right NOW, CEOs need a critical assessment – a second opinion – of their health assets (just in case the government healthcare thing doesn’t work out as well as, let’s say, Amtrak or the Post Office…OK?)

It would be wise – and in the self interest of CEOs and their families if they started investigating or developing some kind contingency plan before the only in-network plan providers are: The Veterans Hospital – or the Veterinary Hospital.

[Maybe I’m just too Pessimistic; maybe this government healthcare thing will really be a good thing, and I won’t have to worry one bit! However, when it comes to my health, it’s good to have a few real options and contingencies in the old back pocket…wouldn’t you agree?]

It would be nice if your employees had options, too…and maybe YOUR research will reveal something viable for them. But first, CEOs need to get creative in how they Shop; how they Buy; how they Pay – and maybe where they GO for healthcare. (We’ll work on our employees’ challenges later.)

HORSE HAS LEFT THE BARN?

Some CEOs have already been thinking that far ahead: In 2006, Nicolet National Bank conducted a study of 500 CEOs and Business Owners. They asked a series of questions about Medical Tourism: 52% of the CEOs had never heard of the term Medical Tourism, but 23% had (but didn’t know much about it). Seventeen percent were Somewhat Familiar; 9% were Very Familiar. (Full Disclosure: Nicolet Bank is a client of the author of this article.)

Nicolet Bank also asked: How interested would you be in traveling to another country for a routine procedure (e.g. your annual Executive Physical) if you knew the cost would be considerably less and the care would be equally good?

Even before The ObamaBomb was dropped, CEOs were intrigued with the concept of medical tourism. “Nearly a third said they’d be interested in such a trip,” said Dr. David Wegge, President of IntellectualMarketing, LLC – the firm that conducts the studies for the bank. “I don’t know how this compares to national CEO data, but I suspect we’re the first to ask.”

Wegge was surprised that 1/3 of the CEOs would be interested, “especially among CEOs who probably have health insurance and fewer financial worries.” Thirty percent were definitely not interested in doing it; 23% were probably not interested; 19% said, “It depends on the country.” (Of the countries listed as medical destinations, Canada was the overall preferred provider; Russia was dead last – definitely an OUT of network provider!)

If Nicolet were to ask those questions today, the levels would probably change substantially, again (and would change yet again each day we turn another page to find more details of the government plan). Speaker Nancy Pelosi said, ““But we have to pass the bill so that you can find out what is in it, away from the fog of the controversy.”

WHOA! Now that the fog has lifted, we’re cleared for takeoff to St. Elsewhere – or somewhere else (ANYwhere else). It’s time to be creative.

In a conference call last month, Renee Marie Stephano, CEO of the Medical Tourism Association told me that CEOs were ready to make their reservations. “Even in Florida, it takes me four months to see an Orthopedic Doc – and you know it’s going to get worse as The Boomers start needing more care and as the Government Plan kicks in. It’s time to start exploring the many possibilities. It’s time to get creative.”

Since the Day the Bomb was Dropped, CEOs and Business Owners are becoming much more curious; some CEOs are getting antsy. The alternatives ARE out there; possibilities DO exist. NOW is the time to look; now is the time to be Creative…

But, Heal Yourself, first.

TrendSpotting is one of the many creative talents of Michael Bina : ) Six years ago, when the concept of Medical Tourism first appeared on his CEO|Radar© screen, he asked CEOs in Wisconsin 2 questions:

1.) What would you say to an Exclusive/Executive Medical Retreat in…let’s say, Costa Rica in the Middle of JANUARY!?

2.) What would your SPOUSE say? Yeah, CEOs answered emphatically – and unanimously! (Bina didn’t even have to mention to the CEOs that the retreat could be tax deductible.)

Bina is NOW VERY BUSY looking for Dr. Livingston, we presume, amongst the rainforests and beaches of tropical Costa Rica. Anyone who wants to get creative with Bina in Costa should: LINK UP, or CALL: 920 362.5757