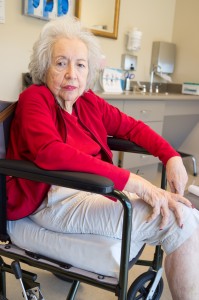 Christmas can't come too late this year for Robin Williams, a 69-year-old grandfather of 10 from South Wales. That's when his cardiologist has told him he has left to live.

Williams is a casualty-in-waiting and there are thousands of others like him at the mercy of the cash-strapped National Health Service, which patients claim, despite their obvious pains, has forced them to endure lengthy periods before seeing a physician.
‍

Public disillusionment is a chronic symptom of patients in Wales particularly the elderly who must wait on-average 170 days for basic procedures, like hip or knee surgery, compared to 70 days in nearby countries, such as Scotland and England, which form the United Kingdom.
‍

I was in enormous discomfort, Botterill told the BBC. I live a very active life gardening, dancing and walking. I couldn't do any of those things. I stopped them all.
‍

Side-stepping NHS and seeking treatment at a private facility in Wales would have cost Botterill 12,500. Worse, she would not have been able to claim reimbursement. Instead, acting on the suggestion of her husband's colleague, she sought surgery at a Belgium hospital. A five-night hospital stay in Ghent cost Botterill 9,000, of which her local health board reimbursed 6,500.
‍

Earlier this month, the top court of the European Union in Luxembourg found no fault in decision's like hers, ruling that so-called medical tourism patients seeking treatment in another member state should have the cost covered by their home authorities if local care is not available in good time. The European Court of Justice ruling validated the plight of a Romania woman, who went to Germany for open heart surgery. Her local health authority had refused to pay for the18,000 surgery.
‍

The reimbursement of medical expenses incurred in another member state cannot be refused where a lack of basic medical supplies and infrastructure means treatment is not available locally in good time, the court said. Judgments on time and availability of treatments, the court said, must be made by the hospitals and relevant authorities in the patient's home country.

Renée-Marie Stephano, President of the Medical Tourism Association, said far too many patients are left in the dark about opportunities stemming from the EU cross-border directive.
‍

Cross-border patients are just beginning to take advantage of the directive and access care across Europe, said Stephano, on the heels of hosting a European Summit that raised awareness of cross-border issues and offered action plans to assist member-state patients.

But, an understanding of the EU directive is nowhere near where it should be, which means opportunities that enhance health and detect serious illnesses at an early stage are being sorely lost.
‍

In some cases, both medical professionals and patients are missing the boat to travel abroad. Phil Jones got on the internet and looked into medical tourism procedures after discovering he could not afford the cost of a private hospital in Britain.

He thought about leaving Wales for surgery in the South of France, but, despite the more feasible price, he was worried that he could not afford to stay long enough to recover before returning home. No one informed him not even his doctor — that he could have gone to France and had hip surgery and reclaimed most his costs.
‍

It surprised me, said Jones, after learning of the European law, which allows UK patients who are clinically eligible for NHS treatment to seek medical tourism procedures in EU countries.

Are you saying that I could have gone six months before my operation, had this done in a perfectly normal hospital in northern Europe, and this would have been paid for by my health authority? That would have been fantastic.
‍

Top-notch facilities throughout the EU that offer world-class success rates with prices often half of what can be expected at home are likely to add salt on the wounds of patients who thought they had to suffer through long lines for surgeries in the United Kingdom.

Most of all the 28-member EU states have proclaimed their availability to medical tourism, offering a multitude of treatments. While many European patients have no problems with resorting to treatment when they become sick during travel within the EU, few have thought about taking advantage of their new services.
‍

Finns, in general are not aware of their right to use healthcare services in other EU countries. According to a Medical Estonia report, only 39 percent of respondents had heard of the EU cross-border directive and only 12 percent who claimed to have had treatments abroad took advantage of compensation from Kela, the social security benefits provider of Finland.
‍

Poland is attempting to change some minds. A government-back initiative is targeting Europeans, particularly those in Scandinavia, Germany, Eastern Europe and the UK, to combine low-cost flights, and inexpensive treatments and accommodations at attractive cities like Krakow to lure medical tourism patients.

Maciej Szarek, a financial advisor from Scotland, has visited Dentestetica in Poland, to have his wisdom teeth removed. When he returns later this year to complete the procedure, he expects to pay half the price of what surgery which also includes partial removal of his jaw would cost in the United Kingdom.
‍

The EU funds the majority of Poland's medical tourism development program, which helped to attract 320,000 patients in 2012 including 42 percent for plastic surgery, most notably breast implants. A third of the patients came for dentistry and 9 percent for obesity-related procedures, such as gastric bands, which in Poland, typically, cost 40 percent of the 10,000 EU average.
‍

We understand that people have outdated images of Polish medical facilities, but we are here to say, we now have world-class facilities, said Magdalena Rutkowski, who directs Poland Medical Tourism, a member of the Medical Tourism Association and sponsor this year of the 7th World Medical Tourism & Global Healthcare Congress, in Washington, D.C.

It amazes me that people can be asked to pay $100,000 for heart bypass surgery in the United States, but they can fly nine hours to us and have as good or better treatment and just pay $15,000.
‍

No Need to Wait

Some countries haven't caught on fast enough for EU officials, who have criticized the Czech Republic, Romania and Slovenia for inadequately implementing the directive into their national health systems.
‍

The EU directive couldn't come soon enough for Kate, who couldn't wait to start a family. After three late miscarriages, years of unsuccessful NHS fertility treatments and the subsequent closure of her clinic, the British woman thought she would have to wait forever.
‍

To her excitement, forever become a couple of months when Kate flew to Spain to consult an IVF clinic in Barcelona. Five weeks later, she was called back for treatment. At 42, Kate is finally pregnant with her first daughter; thanks, in large part, to a medical tourism procedure she conceived