Weight Stigma- Where Does Obesity Fit In? 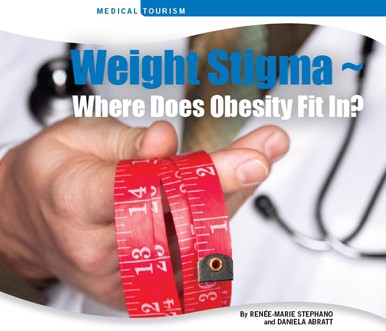 The healthcare system in the United States is constantly under reform, but are the new changes adding fuel to an already burning flame? A study by Yale University has shown that medical professionals tend to discriminate against obese patients, denying them services because they cannot accommodate them or because of the high risk of complications.

The study states that healthcare professionals in the U.S. and abroad tend to endorse stereotypical assumptions about people who are obese, ones that suggest they are lazy, unmotivated and noncompliant.

The incongruence between doctors’ and patients’ own perceptions creates a communication gap that hinders successful treatment. The weight stigma also deters patients from seeking preventive care in order to avoid the embarrassment or rude remarks.
‍

Obesity is determined when a person’s body mass index (BMI) equals 30 or higher. Obese adults make up 33.8 percent of the U.S. population, according to the Centers for Disease Control and Prevention (CDC), and 17 percent (12.5 million) of children and adolescents between ages 2 and 19 are obese.
‍

Because obesity leads to many other health issues, like diabetes, heart disease and stroke, obese patients tend to use more health resources. In 2008, medical costs associated with obesity were about $147 billion, according to the CDC. The medical costs for third-party payers for people who are obese were $1,429 higher than for those covering people of normal weight.
‍

Perhaps this is why hospitals, doctors and insurance companies are cutting back.
‍

Many smaller hospitals are poorly equipped to serve 300- to 500-pound patients, said Dr. Michael Jay Nusbaum, Chief of Bariatric Surgery at Morristown Medical Center. He said they do not have the finances to invest in equipment, including CAT Scans and MRIs, that will support their heavier weight. And often, they cannot transfer these patients to other hospitals because they lack larger and stronger stretchers and wheelchairs.
‍

Nusbaum said that if obese patients are specifically seeking weight-loss surgery, like gastric banding or gastric bypass, they will often go to a bariatric center, which should have the equipment to accommodate them. However, the problem occurs when these patients are seeking other surgeries, like cardiac procedures or hip replacements. These general hospitals might not be prepared to serve morbidly obese patients.
‍

Another issue is the risk of complications. The more obese a patient is, the higher the likelihood is for additional complications. For this reason, doctors – and hospitals, as well – might be wary to take on a high-risk patient. Dr. Joseph Colella, a robotic bariatric surgeon in Pittsburgh, PA., said that physicians are doing the best they can to help these patients, but often times, their best is not enough.
‍

“It’s not that medicine doesn’t want to help them,” he said. “It’s just that many doctors don’t have the resources to help them. I don’t think its conscious discrimination.”
‍

Colella said doctors are now being driven toward outcome-based results, so they have to find new ways to get the same results with obese patients that they would with those of healthy weight. For example, many doctors are now using robotics to help eliminate some of the potential surgical complications. But, he said, doctors and hospitals generally are ill-prepared and thus often have to turn patients away.
‍

Nusbaum believes this trend might get worse with the launching of the government’s new law to create accountable care organizations (ACO). These ACOs are collaborative networks between doctors and hospitals that share responsibility of patients’ care.

Set to begin in January 2012, ACOs are allotted a certain amount of money to use for their patients. Nusbaum said they restrict healthcare dollars by fostering a for-profit, corporate business model. He said hospitals will try to spend as little as possible so they make a profit, and in doing so, they will turn away patients who are higher risk and might need more surgeries and care.
‍

Additionally, high risks are associated with a higher potential for malpractice, another issue that deters physicians from performing surgeries on obese patients.
‍

“You can understand why [doctors] are doing that, but it’s just not fair,” Nusbaum said, adding that doctors in both public hospitals and private practice will be subject to report cards stating their complication rates. These rates, however, must be interpreted correctly, because some fields of medicine or some surgeries are inherently riskier than others.
‍

Currently, Medicare and Medicaid cover bariatric surgery, but with the increased health risks – and thus increased costs – for morbidly obese patients, many insurance companies are cutting their coverage of bariatric procedures to save money.
‍

Morbidly obese patients have a number of issues to deal with, extending far beyond financial concerns. Nusbaum said people generally have the mistaken perception that these patients are lazy, unmotivated and lack self control.

But often there are a number of other reasons why patients gain massive amounts of weight, including genetics and various disorders. He said sometimes doctors will just tell patients to put ice on a swollen ankle and suggest they diet and exercise, but they sometimes neglect to look into other reasons why diet and exercise might not be working. The Yale report found that in a study of 2,449 obese women, 69 percent said they had experienced bias from a doctor.
‍

Patients face this stigma often when they enter a medical facility that lacks a weight-loss center. “If you go to a hospital that never deals with obese patients, you’ll be the outlier,” Nusbaum said. “If you go to a bariatric center, [the staff] has had sensitivity training.”
‍

Tips for Patients – Is Medical Tourism the Answer?

Being turned away not only is embarrassing, but it also places obese patients in a critical predicament. Where can they turn to for care if they face repeated denials?
‍

“If patients have a life-threatening problem, no matter their size, I can’t imagine a hospital turning them away,” Colella said. “But for elective procedures, patients must be their own advocates.” He said that if they feel they should not have been turned away by a hospital or physician, they should seek legal counsel.
‍

Nusbaum suggests that patients avoid their local hospitals, unless they have a bariatric center of excellence. Larger hospitals might have the equipment they need, and patients must also do their own research about who does certain procedures.
‍

Medical tourism is yet another option. The American Society for Metabolic and Bariatric Surgery (ASMBS), however, does not approve of patients traveling abroad for weight-loss surgeries, unless appropriate follow-up and continuity of care have been set up in the foreign country.

ASMBS states that unlike other kinds of surgical procedures that require minimal postoperative care, successfully treating chronic obesity requires a long process that includes an extensive program of surgical, medical, psychological and dietary care. This type of support is thus difficult to achieve in the short-term setting of medical tourism.
‍

However, if patients do choose to travel for this type of surgery, ASMBS suggests the following:

Colella said that ultimately, if the surgery is available locally, patients should rather use that option. “Our system isn’t perfect,” he said, “but we have the best oversight and best policing of medicine.”
‍

Physicians ought to educate themselves and treat each patient as an individual, regardless of their size. Patients need to strive to maintain as healthy a lifestyle as possible in their circumstances, do research and fight for their healthcare they believe they deserve.
‍

Daniela Abratt is completing a Bachelor of Science in Journalism and minor in Inter-national Development and Humanitarian Assistance at the University of Florida in Gainesville and will graduate in May 2012. She has previously interned at The Miami Herald and is planning on attending law school in Fall 2012. She writes for the Medical Tourism Association’sTM Medical Tourism Magazine and Health Tourism Magazine.