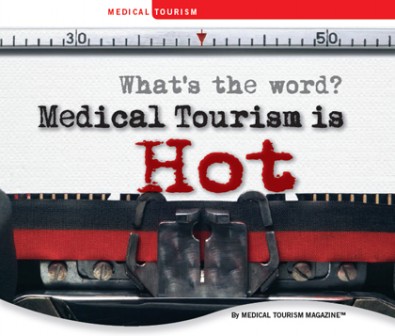 Summer was nothing short of hot for the medical tourism industry, which has become a point of conversation around the world. Proof is in Hollywood and the New York Times, where medical tourism – in fact or fiction – is making a big splash.

Consider the hundreds who responded to a New York Times series on medical tourism, first, in the article “In Need of a New Hip, but Priced Out of the U.S,” and another piece that followed about “The Growing Popularity of Having Surgery Overseas,” which featured comments from Jonathan Edelheit, CEO of the Medical Tourism Association® and President of the Healthcare Reform Center and Policy Institute.
‍

If that weren’t to light a spark under patients and healthcare providers, thoughts of an out-of-this world destination where medical care is timely and inexpensive were further heightened following the premiere of “Elysium,” the much-anticipated summer blockbuster film starring Matt Damon.
‍

As the futuristic story goes in the year 2154, “Elysium” is an alternative to Earth, the planet blighted by pollution, overpopulation and healthcare shortages. “Elysium” – a circular space station constructed more in the image of Hollywood than NASA – is a healthcare destination, one that offers far-reaching cures for all ills.
‍

Anyone of wealth and status lives on “Elysium.” Not Damon, who plays a former thief and current factory worker hoping to leave Earth someday for “Elysium,” where patients desperate for medical attention make clandestine space flights to use machines that cure all.

In the meantime, Damon, once a legend in the Los Angeles neighborhood he lives in, is afflicted with a lethal dose of radiation that threatens to kill him in five days; unless, of course, he can somehow get to “Elysium” and be treated by one of the machines, in a sort of sci-fi version of universal healthcare.
‍

In this day and age and closer to Earth, patients in the United States and, for that matter, around the world don’t need a Hollywood plot to know that access to affordable and timely medical care is a hot-button issue worthy of the big screen. Rising costs and inadequate care is a script that plays out in homes across the globe, where many patients have been moved to seek elective procedures and treatments overseas.
‍

Signs of the Times

The New York Times series, which also appeared in the International Herald Tribune, drew responses from hundreds of readers who said they would be willing to follow the similar medical tourism paths abroad for inexpensive healthcare that could not be found through hospitals and physicians in the United States.

Many would be led to, perhaps, contemplate medical tourism after following the plight of Michael Shopenn, whose efforts to find a solution to chronic arthritic pain were chronicled in the New York Times article.

Shoppen, 67, an avid snowboarder, had to fly to Belgium for surgery he could afford after his health insurance plan failed to cover the cost of the artificial hip – manufactured in Indiana, of all places — he needed.

The insurance company considered his degenerative disease, although related to a prior sports injury, a pre-existing condition and ineligible for coverage. “Americans are more than willing to travel overseas because they can’t afford to pay for treatments they desperately need here in the United States,” said Renee-Marie Stephano, President of the Medical Tourism Association®.

“Even though healthcare reform may insure more Americans, soaring premiums that cover limited treatments, longer delays for procedures, and rising out-of-pocket costs will continue to encourage Americans to think-twice about the advantages of medical tourism.”
‍

A recent survey conducted for the Medical Tourism Association® concurred that health travel had become a viable alternative for patients in the United States. The 2013 MTA Medical Tourism Survey indicated that 48 percent of the respondents would certainly be interested in medical travel at some point in the future.

The data was in sharp contrast to a Deloitte Health Center for Health Solutions survey in 2009, which found 67 percent of healthcare consumers to not likely be willing to travel outside the United States for a necessary procedure. “Americans have come to understand and appreciate that quality medical care is available overseas,” said Edelheit.

“That’s a perception – warranted or not – that they did not have just a few years ago.” At some level, patient confusion persists about healthcare options still, but even greater concern grows among providers, where hospitals and clinics and related facilities are often under capacity and the most sought-after medical expertise goes untapped.

Meanwhile, in countries around the world, inaccessible care, inadequate and congested services, escalating costs, and dwindling physician rosters have led to unmet demands for procedures and treatments and — under the worst of circumstances — unnecessary patient deaths.
‍

“In the end, no one comes up a winner,” said Stephano. “Medical care intended to help people is failing to deliver the outcomes patients deserve to expect. What good are the best hospitals and physicians the world has to offer without access to patients who need them the most?”

Conscientious and forward-thinking providers – the government, hospitals, doctors, academia, pharmaceutical companies and medical device manufacturers – will gather at the Congress to ask the hard questions related to spiraling costs, access options, and enhanced procedures and treatments and offer a long-term prognosis for the healthcare community.