Why I Became a Medical Tourist 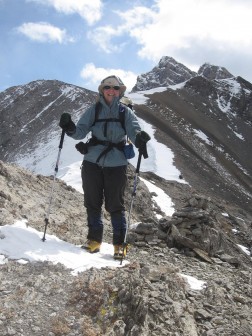 Shortly after my descent of Kilimanjaro (age 61) I began to notice difficulty in standing perfectly erect and my gait became a hobble, especially after long periods of sitting.  An x-ray identified osteoarthritis and joint deterioration, especially in the left hip.  My research quickly revealed that as a woman over 55 years of age and residing in Alberta, Canada, my surgical options were limited to total hip replacement, take it or leave it.  The province of Alberta judged me too old for hip resurfacing or the Birmingham hip.

My Personal Experiences with Medical Tourism

In my previous life I was an academic–philosophy professor. I loved my job, and honestly didn’t know if I could live without teaching. But my life took a strange twist. With early retirement at age 55 I became a mountaineer. My passion for teaching and writing transferred itself to the mountains swiftly, smoothly, and seamlessly. Six years later when my left hip started acting up, my foray into medical tourism began; this paper is the account of that foray.
‍

My husband and I moved from southwestern Ontario to the town of Canmore in western Alberta and the Rocky Mountains became my backyard playground.  From mountain friends I learned scrambling and rudimentary climbing skills, attaining hundreds of dizzying peaks.  I also attained some high altitude success:  K2 basecamp (5,135 meters) via the Concordia trek in 2000, Orizaba (5,610  meters) via the Perfil del Diablo route in 2002, and Kilimanjaro (5,895 meters) via the Western Breach route in 2004.
‍

It is my great good fortune to have a physiotherapist whose climbing partner had traveled to Apollo Specialty Hospital in Chennai, India for a hip resurfacing procedure with the surgeon, Dr. Bose.  Sarah recommended that I think about this option.  It took very little thinking—the superiority of hip resurfacing over total hip replacement, especially if you lead an active athletic life, is not even controversial.  I corresponded with Dr. Bose by e-mail for well over a year, during which time I asked numerous questions.  He assured me that I was a perfect candidate for hip resurfacing and answered all my questions clearly and patiently.
‍

On October 7, 2007, I checked into the Apollo Specialty Hospital.  I must confess that as we approached the hospital, in the slums of Chennai, my head went into heavy second-guessing.  Nor was my apprehension soothed when we walked through the entrance to a view of dozens of people waiting for admission in hard narrow chairs.  My second impression was the strong odor of disinfectant and the spotlessness of the hospital.
‍

We did not wait in these hard narrow chairs, but were whisked by elevator to the fourth floor and then along several corridors to broad doors which formed the entrance to the “Platinum Ward,” proclaimed in large print above the doors.  With the Platinum Ward came coolness—air-conditioning.  This ward consisted of seven private rooms and boasted seven full-time registered nurses on day shift, two on afternoon shift, and two on night shift.

Each room had a lap-top computer (great for keeping anxious family and friends apprised of one’s condition), a private bathroom, patient bed, and a cot for accompanying family member or friend.  The smaller rooms outside my ward also contained a family/friend cot for each patient; in my opinion, this is a wonderful concept in care-giving, not only relieving the nursing staff of some work, but also providing a great psychological boost to the patient.
‍

By this point my apprehension had vanished, replaced by guilt for being a “rich” westerner, gobbling up resources ample for several locals.  Aside from the guilt, which was partly assuaged upon learning that Apollo Specialty Hospitals set aside some beds free for low-income locals, I enjoyed the incredible treatment.  For example, I was visited early-on by a dietician checking on whether I liked the food, at least two doctors, including my surgeon, visited me every day, I had two physiotherapy sessions each day, and so on.

The superiority of this treatment over what I could have expected in any Canadian hospital is mind-blowing.  Shortly after returning home, I compared notes with a friend whose adult son had just undergone a somewhat similar surgery in a hospital in Edmonton, Alberta.  Her son experienced long waits for pain relief (well past the scheduled times), limited contact with doctors or nurses, and often meals gone cold before they were delivered to him.
‍

Immediately following discharge from the hospital, my husband and I traveled to Fisherman’s Cove, a luxurious multi-star ocean resort on the outskirts of Chennai. This was pricey, and I later learned that we could have requested a less expensive resort. Nevertheless, the location was spectacular, the accommodation incredible, and the staff more than we could have hoped for. Just one example: rather than have me stand to register, they immediately took us to our room so that I could sit in comfort while they registered us. There were three restaurants, and strolling back and forth to them was a perfect way to get in the walking that was part of my recovery.
‍

One of the worries about medical tourism is that when the patients return home, they either sink or swim on their own.  This has not been my experience.  I have already sent my six-month post-surgery x-ray to Dr. Bose, and he has e-mailed me his response—success!  Also, I e-mailed him in great panic following a squeak in the hip, and within 48 hours he e-mailed back, explaining that this squeak is created by a fluid imbalance, that it is temporary, and nothing to worry about.

However, Chennai, India is a long way from Canmore, Alberta, and were I ever to develop problems resulting from my hip resurfacing procedure, I am lucky that my family doctor is sympathetic to my reasons for becoming a medical tourist. I am confident that he would help me to the best of his ability through any ensuing problems.
‍

The test of the pudding is in the mountains, of course, and I am giddy with happiness in this regard.  Within five months post-surgery (which probably would have been earlier, save for the winter conditions in Canada), I was back to full mountaineering activity.

For example, in a one month period less than a year post-surgery, I did a total of 13,896 meters vertical ascent which included ten significant mountain summits and a 90 km four day backpack over four mountain passes in the Columbia Icefields carrying a 70 pound pack.
‍

My personal circumstances were that as a woman over 55 years old, I did not qualify for the Birmingham Hip or hip resurfacing in Canada.  Men qualify up to the age of 65, by the way.  This is apparently because women my age are more prone to osteoporosis than older men, and if you have weak bones, hip resurfacing won’t work.  You may ask why a simple bone density criterion isn’t used for deciding who gets hip resurfacing, rather than age- and gender-based criteria.

Alberta Health Services, in its August policy statement, says “Every Albertan deserves equitable access to health care services to acute care, to wellness services, and to preventative health initiatives.  Whether they live in the far north, the far south, in an urban setting or a rural one, every man, woman and child in this province must be able to get the care they need when they need it.  We act in trust on their behalf, and every decision made going forward must place their interest first and foremost.”
‍

I was ruled ineligible for hip resurfacing because many women my age have bones too weak to permit this procedure.  That my bones were strong enough didn’t count.  To me, this is like saying “In general, women are not able to lift weights as heavy as men are able to lift; therefore women should be prohibited from working at any jobs which entail lifting weights, such as letter carrier.”  Or, an example facing in the other direction:

“In general, men are not as skilled at working with young children as women are; therefore men should be barred from any form of employment in the early childhood realm, such as kindergarten teacher.”  Instances of either of these two examples would create a legitimate outcry of human rights violation.  Yet Alberta Health Services, which pledged itself to act in trust on my behalf, denied me a procedure on the basis that in general, women my age would not be good candidates for the procedure.
‍

CTV News recently aired a program the focus of which is that while lower income people are twice as likely to need hip or knee replacements, they are only half as likely to be on a waitlist for this surgery. While gender disparity was not evident in the lower income groups, it was very evident in higher-income groups, with–no surprise here–women being disadvantaged.   So while Alberta Health Services say they act in trust on behalf of every Albertan to see that each person receives equitable access to health care, in fact Albertans enjoy less equity if they are low income, old, or female.
‍

Hip resurfacing is a more difficult surgery to perform than full hip replacement and requires a more skilled surgeon. This introduces the scarce commodity problem.  Skilled orthopedic surgeons are few and their time is golden.  So at some level of government, the decision has been made that women over 55 and men over 65 don’t merit such time.  Who exactly got to decide this and on what basis exactly did they decide it?  These are questions to which we should be demanding answers, and more important, to which we should be demanding satisfactory answers.
‍

In conclusion, asking Robert Frost’s pardon, I conclude with a take-off from the last stanza of his famous poem ”Stopping by Woods on a Snowy Evening.”  Robert Frost writes:
‍

These words are the clearest reason I can give for becoming a medical tourist.  I too have promises to keep, even if some of them are to myself. I feel akin to Robert Frost’s traveler for, like her or him, while I wish to savor the lovely woods, I cannot tarry too long while there are
‍