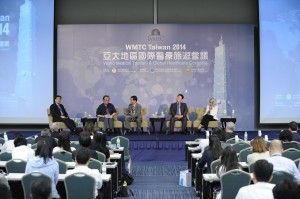 During a recent business trip to the United States, Huang Xiaoyuan discovered an unexpected value proposition that she could not find to her liking back home in China. The venture capitalist from Beijing left San Francisco heart in hand and with a new appreciation for medical tourism services abroad.

At my age, when I'm ill, I need reliable information at my fingertips to fight the fight, Huang, who was introduced to More Health, Inc., a local start-up specializing in accommodating medical tourism patients from China, told chinadaily.com. Over the years through my friends and family, I have witnessed several drug overdoses in (in China's medical system) and instances of malpractice.
‍

Industry insiders aware of just how difficult a trip to the doctor can be in China and entrepreneurs interested in tapping into the Middle Kingdom's lucrative market are sharing their experiences and offering solutions at World Medical Tourism Congress — Taiwan 2014, this week, at the Taipei International Convention Center.
‍

Renée-Marie Stephano, President of the Medical Tourism Association, said from Taiwan that there is a wide gap in medical services for what wealthy patients expect and receive in China. Patient complaints can range from long waits at public hospitals, mediocre treatment, limited choice of physicians and medical negligence.
‍

New facilities in Taiwan along with loosening of restrictions on both sides of the Strait have created perfect conditions to extend medical tourism opportunities to Chinese patients on the mainland, said Stephano. Chinese medical tourists want high-end stem cell procedures, detoxification programs and spa therapies, among others. As relations continue to thaw, healthcare providers and entrepreneurs in Taiwan, throughout China and around the world need to be positioned to accept a large share of this market.
‍

Our mission is to overcome geographic and linguistic barriers that prevent Chinese from receiving world-class medical care, said Wang Shun, an officer at Saint Lucia Consulting, which recently agreed to terms on a deal with Sequoia Capital China, an international investment company, worth 50 million Yuan to promote medical tourism.

Cai Qiang, Saint Lucia Consulting founder and CEO, said he lost partial sight in his left eye when he was a teenager living in China as a result of medical negligence. He said Saint Lucia has assisted more than 100 patients abroad, many of them wealthy Chinese seeking procedures at the consulting firm's partner hospitals in the United States, United Kingdom, Japan, Singapore and South Korea.
‍

Before their experiences overseas, they had never expected such quality care and services as they received at foreign hospitals, said Cai, who has lived the past decade in Australia. Over the last four years, our team has provided Chinese corporate executives, and the wealthy elite and their families with highly personalized medical tourism facilitation services, expert translation services and informed advice on their overseas medical treatments.
‍

Cai said a 46-year-old Shanghai man diagnosed with lung cancer in June took advantage of a medical tourism opportunity through Saint Lucia with Massachusetts General Hospital, where he was able to undergo outpatient chemotherapy without the side effects he may have experienced back home in China.
‍