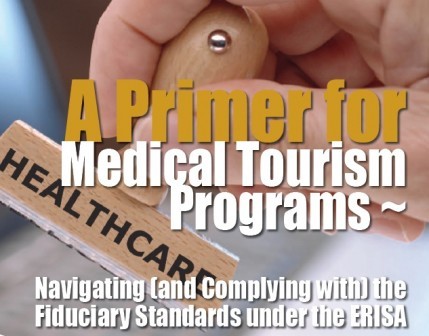 Medical tourism—generally understood to mean the practice of traveling across international borders to obtain health care—offers the promise of access to world-class medical services at prices that are in many instances significantly less than those charged by U.S. providers. While medical tourism services typically cover selected specialized surgeries (e.g., joint replacement, cardiac surgery, dental surgery, and even cosmetic surgeries), they can include just about anything, e.g., psychiatry, alternative treatments, and convalescent care.
‍

Due principally to the unrelenting increases in domestic health care costs, employer-sponsored group health plans (large self-funded group health plans, in particular) have added, or are looking to add, medical tourism options coupled in many instances with incentives aimed at increasing utilization of offshore providers in appropriate instances.
‍

Where medical tourism benefits are provided under a group health plan of a self-insured U.S. employer in the private-sector, the arrangement is subject to the fiduciary standards and other requirements of the Employee Retirement Income Security Act of 1974 (“ERISA”). Church and governmental plans are generally exempt from ERISA, but they are subject to state and local fiduciary requirements that in many instances are strikingly similar to those under ERISA.

Also, as a service provider, the medical tourism facilitator must take care to avoid participating in “prohibited transactions,” with respect to which ERISA generally imposes an outright ban.
‍

This article explains the application of the ERISA fiduciary standards to medical tourism facilitators and offers some suggested best practices to assist group health plans and their sponsors in meeting their compliance obligations.
‍

Overview of the ERISA Fiduciary Standards

(ii)  exercises any authority or responsibility over management or disposition of plan assets,

(iii)  renders (or has any authority or responsibility to render) investment advice with respect to plan assets for a fee, or

The selection of medical providers (including medical travel providers) is a fiduciary function. In the case of employer-sponsored group health plans, governing bodies, senior management and human resources staff generally share fiduciary obligations. Where the day-to-day selection of providers is in the hands of the human resources staff, the governing body and senior management have a residual duty to monitor.
‍

Where the plan employer-provided group health plan in issue is subject to ERISA (i.e., private sector plans that are neither government nor church plans), the provisions of ERISA governing remedies and preemption of state law work to the benefit of fiduciaries and their service providers (including medical tourism programs).

In particular, disputes must first go through an internal appeals process before a claimant to gain access to the courts, and in most instances plans are able to insist on having claims heard in Federal rather than state courts. Moreover, where the plan sponsor is found to have claims exposure ERISA sharply limits the available remedies.
‍

ERISAs fiduciary standards do not require a fiduciary to act as a guarantor of a particular result. Simply because a plan investment (in the case of a pension plan) or a surgical outcome (under a group medical plan) is less than optimal, does not result in fiduciary exposure.

Rather, the thrust of the ERISA fiduciary standards is to ensure that proper (i.e., prudent) processes are adopted and followed in a manner that places the interests of participants above other concerns. Thus, if a group plan hires a medical tourism facilitator or provider with no due diligence, it risks fiduciary exposure in the case a suboptimal medical tourism outcome.

Conversely, where the group health plan applies a robust and systematic due diligence process in connection with its selection of a medical tourism provider, either directly or through a facilitator, and if it periodically monitors the provider’s performance, then it should be insulated from fiduciary exposure in the case of a suboptimal outcome.

Medical tourism facilitators can assist their client group health plans with their fiduciary compliance by adopting and rigorously adhering to their own internal processes and procedures.
‍

In particular, it would behoove medical tourism facilitators to adopt and follow policies and procedures relating at a minimum to the following items:

When providing services to any ERISA-covered group medical plan, the medical tourism facilitator should expressly and affirmatively recognize its status as an ERISA service provider. It should also stand ready to furnish written confirmation of its statue as such on request.

The medical tourism facilitator should establish, document and adhere to clear standards respecting selection of medical providers. Generally, this means that the program will look to an appropriate international accrediting body such as the Joint Commission International (JCI). (The JCI is an independent private sector not-for-profit organization that develops nationally and internationally recognized medical procedures and standards.)

The medical tourism facilitator should implement procedures to assess the appropriateness of offshore treatment. These include choice of hospitals and tourist destinations, and duration of stay, etc. Once signing on, the plan participant/patient should be required to sign appropriate waivers, informed consents, and other agreements. There should also be procedures for providing recommendation letters for issuance of the appropriate medical visas.

The medical tourism facilitator should establish its own oversight committee, which might include external experts where appropriate. The committee might continually monitor developments, including emerging accreditation and compliance with local laws and other standards.

The medical tourism facilitator must take care to avoid exercising discretion over any aspect of its client’s plan maintenance or operation. The program’s policies and procedures should require that all requests for discretionary actions be referred to the client plan.

The medical tourism facilitator’s policies and procedures should avoid any transaction that smacks of self-dealing or involves “insider” dealings. Care must also be taken to ensure that the fees charged to a client plan constitute “reasonable compensation” for the purpose of avoiding prohibited transactions. In this regard, the contract with the plan sponsor/group health plan should refer to the standards under 29 CFR § 2550.408b-2(c) (relating to the reasonableness of compensation as the basis for avoiding a prohibited transaction).

At the risk of stating the obvious, the medical tourism facilitator should expressly reserve the right to modify, amend, or terminate the policies and procedures.
‍

The ERISA fiduciary standards are of particular interest to medical tourism facilitators for two reasons:  First, as a matter of substance, these standards constitute applicable law with which plans must comply or face exposure. Second, as a matter of business best practices large self-funded group health plans of the sort that would most likely be interested in adding a medical tourism feature tend to have savvy in-house human resource professionals and legal staffs and top-flight external advisors who are well aware of what ERISA requires. One of the first questions likely to surface in the due diligence process is:
‍

what about ERISA, or how can you help us comply with ERISA? Compliance with ERISA is not difficult, but it does demand attention to both substance and process. By adopting and adhering to a set of basic policies and procedures that take the ERISA fiduciary standards into account, medical tourism facilitators should be able to provide important comfort to plan fiduciaries—both during the “sales” process and when it comes to day-to-day operation of the medical tourism benefit option.
‍

Alden J. Bianchi is a Member in the Boston office of Mintz, Levin, Cohn, Ferris, Glovsky and Popeo, P.C. and the practice group leader of the firm’s employee benefits and executive compensation practice group. He advises corporate, not-for-profit, governmental and individual clients on a broad range of executive compensation and employee benefits issues, including qualified and non-qualified retirement plans, stock and stock-based compensation arrangements, ERISA fiduciary and prohibited transaction issues, benefit-related aspects of mergers and acquisitions, and health and welfare plans.

Mr. Bianchi represented the Romney administration in connection with the ground-breaking Massachusetts health care reform act, and he currently advises the Massachusetts Health Insurance Connector Authority, the state agency established to facilitate the purchase of affordable health insurance by individuals and small groups.

He has testified before the Senate Finance Committee and briefed the staffs of the Senate Health, Education, Labor, and Pensions Committee and the U.S. House-Senate Joint Committee on Taxation on the subject of health care reform. He has also advised a handful of other states with respect to health reform issues.
‍

Mr. Bianchi has written and lectured extensively on employee benefits issues. He is the author of six books, including Employee Benefits for the Contingent Workforce and Plan Disqualification and ERISA Litigation (both published by Tax Management, Inc.), and Benefits Compliance and ERISA Basics (both published by World-at-Work), and over 100 benefits-related articles.

He is listed in Woodward & White’s The Best Lawyers in America, Chambers USA: America’s Leading Lawyers for Business, Marquis’ Who’s Who in American Law, and he is a Fellow of the American College of Employee Benefits Counsel.  Alden J. Bianchi can be reached at ajbianchi@mintz.com