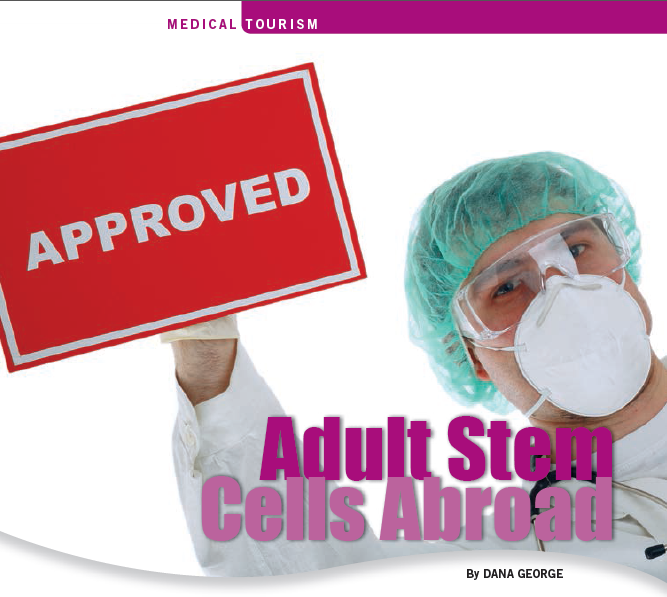 Even when innovation and new technology drives patients from the most advanced healthcare systems in the world out of their comfort zone, due diligence is a must. If something sounds too good to be true, it probably is.
‍

What Are Adult Stem Cells?

Clinics around the world extract adult stem cells from fat, generally taken by liposuction from the stomach. These “autologous” stem cells are unique in that they are undifferentiated; meaning that they can become whatever kind of cells the body needs them to be.

For example, autologous stem cells transferred to the heart will seek damage in that area and replenish dying cells therefore regenerating damaged tissue. The same applies to other damaged areas of the body.
‍

Why Travel for Treatment?

The question becomes, why aren’t more U.S. patients trying to get into a clinical trial in this country? The answer is simple – many of them are too ill to take the chance that they will be among the 50 percent of patients who will receive a placebo. They are looking for immediate help and can’t wait for a year or more to learn whether they received the “real thing.”
‍

At the age of 65, Dean Stokes was one such patient. After suffering a major heart attack, Stokes found traditional treatment dissatisfying. He was alive, but could no longer enjoy many of the activities that had made his life so rich.

His U.S. physician was the one who recommended that he travel to Tijuana for a patient-funded clinical trial that guaranteed he would receive his own stem cells.Stokes says that he made the trip and never looked back. Asked if he was nervous about travelling out of the country
‍

The FDA argues that using a patient’s own cells constitutes interstate commerce because it would depress the market for out-of-state drugs.

he said, “Once I got there, I felt extremely comfortable. The facility was first-class. I could look out the window and see kids playing at school, and see parents waiting to pick their kids up.”
‍

Stokes says that he felt better immediately after his stem cell procedure, both physically and mentally. Stokes took two walking tests the day prior to his stem cell treatment. He was able to walk 456 meters in the first session and 495 meters during the second. Three months later, he was tested again. By then, he was able to walk 615 meters during one session, and 690 meters in another.
‍

Patients in the United States hear about these kinds of results, only to find themselves frustrated to learn that they are unable to receive the treatments they need in their local clinic or hospital. Long waits for some clinical trials, the inability to take part in a trial due to the complexity of one’s disease, and concern over whether they will receive their own stem cells or a placebo are enough to send sick people out in search of a remedy.
‍

FDA’s decision to protect the interest of drug companies has sent thousands of Americans to foreign countries for physicians who can help them using their own stem cells.

It doesn’t take much online searching to realize that there are a myriad of clinics worldwide offering to do what a patient’s local doctor cannot legally do – use a patient’s own stem cells to treat disease.
‍

In fact, in court files, the Food and Drug Administration (FDA) announced that stem cells are drugs, and therefore subject to their regulatory oversight. The FDA argues that using a patient’s own cells constitutes interstate commerce because it would “depress the market for out-of-state drugs approved by the FDA.” In other words, using stem cells to treat disease would hurt the bottom line of pharmaceutical companies.
‍

The FDA’s decision to protect the interest of drug companies has sent thousands of American citizens to foreign countries in search of qualified physicians who can help them using their own stem cells. Many of those patients are desperate.
‍

“I told my husband that I wanted to die at home, not in some airport,” she said.
‍

That was more than three years ago. Today, Munson says, “I’m just so thankful for the way I feel and the way I can breathe.”
‍

After suffering two heart attacks in 12 years, Mort Farina knew that he had to find an alternative to the traditional treatments available to him in the United States. Like Dean Stokes, it was a U.S. physician who recommended that he look into stem cell treatment outside the country.
‍

“We went down on a Sunday night. They did the liposuction the same night and injected stem cells directly into 27 different areas of my heart, using a catheter through the groin,” Farina said.
‍

Months later, Farina was back at full-throttle, consulting with other pharmacists, teaching, and selling real estate. He seems to be taking it all in stride.
‍

“I feel fine, but I’m not surprised” Farina said. “I did my research and knew there was no downside.”
‍

Protecting Yourself from Scams

The U.S. government warns against travel to other countries for stem cell treatment – and often with good reason. Unless they do their homework, patients don’t know for sure that they will be in good hands.

While there are excellent stem cell programs dotted around the globe, there are also scores of illegitimate operations. The sickest of patients are those who are least likely to investigate prior to travel and the most susceptible to those who would take advantage of them.
‍

There are a number of non-negotiable qualities that should be considered prior to leaving the U.S. for stem cell treatment:

Is there a specialist performing each step of the procedure? A sure sign of an illicit clinic is that one or two doctors claim that they are qualified to perform each step of your procedure, from liposuction to transfer of the stem cells. They are not.

As more U.S. citizens decide to travel abroad for stem cells, doing one’s due diligence becomes critical. Until the day the FDA approves adult stem cell therapies in the United States, patients must learn to determine for themselves where the best medical practices are located. n Is there a specialist performing each

Dana George is a novelist and longtime reporter. She has spent the past few years researching and writing about adult stem cells around the world, interviewing patients who have left the United States for stem cell therapy. George writes for Regenerative Medicine Institute, Mexico.