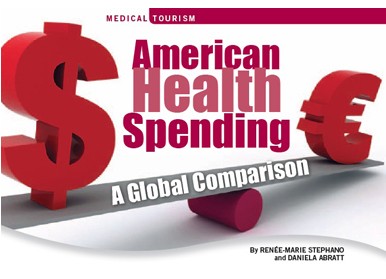 It’s easy to compare statistics within the United States, but when you compare the country to its global partners, the numbers reveal a whole new perspective. Income distribution is one such comparison. In the U.S., the top 1 percent earns more than $380,000 a year. The top 1 percent around the world? $34,000.

World Bank economist Branko Milanovic found that to be in the top 50 percent of the globe, you need to earn at least $1,225 a year; top 20 percent, $5,000; top 10 percent, $12,000. Of course, one must consider that goods and services around the world cost different prices, and certain economies and currencies are stronger than others.
‍

Christopher J. Conover, a research scholar at Duke University’s Center for Health Policy and Inequalities Research, said that the global distribution of health expenditures is tilted much more in the direction of the U.S. than the distribution of income.
‍

So what happens if you compare healthcare expenditures around the globe? Economists and American politicians seem to agree that the U.S. spends too much on healthcare. But how much exactly does the country spend? And how does that compare to other nations around the world?
‍

The U.S. health system accounted for more than one-third of an estimated $6.4 trillion in health spending across the world in 2009. Conover said, “This share is much higher than the U.S. share of worldwide gross national income, a sharp contrast to the rest of the G7 nations (Japan, Germany, UK, France, Italy and Canada) where the shares are almost equal.”
‍

In 2010, the U.S. spent $2.6 trillion on healthcare. That is almost the same amount as the gross domestic product (GDP) of France, the fifth largest economy in the world. According to the Organization for Economic Cooperation and Development (OECD), the U.S. – which spends over $8,000 per American – spends almost 50 percent more on healthcare per person than Norway and Switzerland, the next highest-spending countries, which pay about $5,300 and $5,100, respectively.
‍

Health policy columnist for The New York Times Ezekiel J. Emanuel compared the expenditure to China, the second largest economy in the world. China’s GDP is $5.9 trillion, compared to America’s $14.6 trillion. He said, “So the United States, with a population a quarter of the size of China’s, spends just on healthcare slightly less than half of what China spends on everything.”
‍

Emanuel noted that healthcare costs have been increasing 2 percent faster than the overall economy for more than 30 years. According to the Kaiser Family Foundation, one possible factor could be the recession, which has resulted in higher unemployment and lower incomes for many Americans, forcing many to enroll in Medicaid.

This has placed an increased burden on health spending and affordability. Since 2001, employer-sponsored health coverage for family premiums has increased by 113 percent, and enrollment in Medicare has grown with the aging of baby boomers.
‍

Another reason is that increased life spans equate to higher prevalence of chronic diseases. Kaiser estimates that the treatment costs for chronic illnesses account for over 75 percent of national health expenditures. A smaller factor is administrative costs, which account for about 7 percent of expenditures.

These costs are for government healthcare programs and private insurance. Some critics argue that the mixed public-private system creates overhead costs and large profits that drive healthcare.
‍

One of the biggest factors is that certain drugs cost more and medical professionals earn more in the U.S. than in other countries. U.S. health prices are about 25 percent higher than those in the OECD. Conover explains that “in the United States…it would require $125 to buy a typical bundle of medical services that cost $100 in the average OECD country.” Thus, healthcare spending is expected to be higher.
‍

Conover also argues that the differences between countries in health spending cannot be attributed only to higher prices and/or waste, fraud and abuse. Another minor factor is medical tourism. Because people travel around the world for quality care and treatment, numbers can get skewed.

When foreigners come to the U.S. for medical procedures, he said, they slightly increase the health spending in America while artificially decreasing the spending in their home countries.
‍

This raises a question about how quality compares to spending. Since the U.S. spends so much more than other countries, is its quality of care higher? In some cases, yes, particularly in some of the top hospitals and research facilities around the country.

However, there have been studies that show the opposite. A 2003 study published in Annals of Internal Medicine found that Medicare patients who lived in areas with higher healthcare spending did not get better results.
‍

According to Emanuel, “Almost no matter how we measure [healthcare quality] — whether by life expectancy or by survival for specific diseases like asthma, heart disease or some cancers; by the rate of medical errors; or simply by satisfaction with health services — the United States is actually doing worse than a number of countries, like France and Germany, that spend considerably less.”
‍

Even though America consumes a disproportionate share of medical care resources, this global share is decreasing. According to Conover, in 1995, the United States held about 40 percent of the global health expenditure. By 2009, the share declined by nearly one-tenth. The G7 nations mirrored this decline, but developing nations’ shares increased, mostly because of population growth.
‍

With regard to healthcare, the gap between the wealthiest and poorest nations is even greater than the income gap.
‍

It is often difficult to make an international comparison when contrasting two starkly different countries, like the U.S. and Ethiopia. This is because their healthcare levels are completely dissimilar. However, it is clear that the difference between per capita income and health spending is large.

Conover said that “on average, global per capita income is only about 22 percent of the U.S. average; in contrast, global per capita health spending amounts to only 13 percent of the average American’s.” Less than one-tenth of the world’s population has a level of health spending that exceeds half of what the average American spends on healthcare.
‍

Healthcare is an ongoing debate in the American arena. With elections coming up in November, healthcare will surely be a heated topic. And once a candidate is elected, the world will watch as new healthcare plans are enacted and will wait to see if they make any difference.
‍

Daniela Abratt is completing a Bachelor of Science in Journalism and minor in International Development and Humanitarian Assistance at the University of Florida in Gainesville and will graduate in May 2012. She has previously interned at The Miami Herald and is planning on attending law school in Fall 2012. She writes for the Medical Tourism Association’s Medical Tourism Magazine and Health Tourism Magazine.