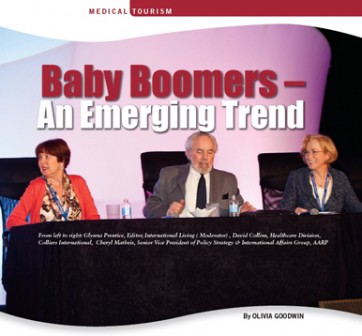 The roughly 76 million babies born in the wake of World War II – from 1946 to 1964 – are aging; the oldest are now in their mid-sixties and the youngest a few years shy of 50. Add to that the lengthened life span thanks to modern medicine and a more active lifestyle, and you can expect the demand for medical care, retirement living and a comfortable style of life will continue to boom.

Dr. Tim Abou-Sayed, a plastic surgeon, said that this is what he is seeing in his profession. He noticed an increase in patients about one year ago at Plastic Surgery of Palm Beach. “The demand for plastic surgery never went away– it has just grown,” he said. It helps that plastic surgery is viewed as “less taboo” than it was 20 years ago, and that “people are starting to get on their feet financially after the economic recession,” he added.
‍

At age 69, Carolyn Roehm is not quite a baby boomer but still reflects the trend.
‍

She is a single and active grandmother who desires to keep up her appearance. She goes out dancing a few times a week to stay active and have fun. As a mother of three, she was never able to lose the baby weight around her stomach by exercising, so five years ago she decided to have liposuction and a tummy tuck.
‍

“I wanted to wear clothes and look good,” said Roehm. “I’ve been single for almost ten years so I figured it would also help in finding someone to share my life with. Since the surgery, my state of mind has changed and I really feel better about myself.”
‍

However, not everyone who wants to look good is ready to go under the knife or spend the money. Dr. Abou-Sayed has found that less invasive procedures such as Botox, or Restylane injections or a “liquid facelift” have been increasing in popularity. These procedures are favorable because patients don’t have to go under anesthesia, plus it’s a lower price point.
‍

“If all baby boomers could afford a facelift, it would be the most popular procedure in my patient population,” said Abou-Sayed. But surgical facelifts are among the most expensive cosmetic procedures, and people are looking for a less invasive way for rejuvenation without having to cash in their IRA, he explained.
‍

“They live on a fixed income but still want to look their best, maybe they can’t afford a facelift yet but they can do Botox every three months and push off a facelift for a while.”

According to the American Society for Aesthetic Plastic Surgery in 2010, there were 84,685 surgical procedures among patients age 65 and older. They included:

People ages 51 to 64 accounted for 22.7 percent of all cosmetic surgery while people past the age of 65 made up 21 percent of all facelifts performed, according to the group.
‍

In addition to the increasing numbers of plastic surgeries, the “boomer” generation will also impact retirement living, assisted living and healthcare.
‍

Baby boomers have been a topic of discussion at each World Medical Tourism & Global Healthcare Congress (WMT & GHC). At this year’s 4th annual Congress, speakers from AARP, Colliers International and International Living spoke on this topic in their presentation: “Baby Boomer Healthcare and Retiring Abroad”.
‍

They discussed how boomers seek a higher quality of life and the need to look and live better results in the need for more cash flow. While affecting the U.S. healthcare system negatively, it will make a positive impact on the global healthcare industry.

With savings of up to 90 percent when seeking overseas medical care or traveling for treatment, many seniors have begun to catch on and are retiring abroad to exotic locations that offer more value and quality healthcare compared to some services in the U.S. But for some, they simply don’t have a choice.
‍

According to The Employee Benefits Research Institute 2010 Retirement Confidence Survey, 54 percent of Americans stated that the total value of their savings and investments was less than $25,000. Due to the recession and the growing number of senior citizens, less money will be allocated to social security and medical care for the elderly.
‍

“While it appears that there is a greater number of people living into their 100’s, the number of chronic diseases including heart disease, diabetes, cancer and obesity, to name a few, have also skyrocketed – and so has the cost of their healthcare,” they said. “This proves that modern/pricey medicines and surgeries are aiding in the increased life spans.”
‍

Percentage of people retired by age 60 per country

These statistics are illustrating the need for suitable retirement living internationally. “Retirement communities are already making changes by adding more places for an active lifestyle with wellness programs and dementia care. International alternatives will be developed for assisted living to attract locals and medical tourists,” Collins explained.
‍

This year AARP and SmartMoney.com reported on a tool from HSBC Bank International called Expat Explorer, which uses a comprehensive database survey to help baby boomers find their dream home abroad. Users can search for locations based on three categories: Experience, Economics and Offspring.

These categories break down even further to more specific issues like healthcare. With more than 30 sub-categories, these boomers should be able to find all the answers they need to make an informed decision.
‍

With millions of people aging consistently and living longer, there needs to be another alternative to Social Security, Medicare and retirement savings covering the cost of healthcare and living. The fact remains that the older generation needs somewhere to go to get the healthcare and quality of living that they want and desire.
‍

Olivia Goodwin is the Associate Editor for the Medical Tourism Magazine. She travels around networking, developing ideas and original content for the Magazine and the Association. Olivia holds a degree in Multimedia Journalism from Florida Atlantic University. Contact Olivia for media inquires and details for contributing articles. She may be reached at Olivia@MedicalTourismAssociation.com