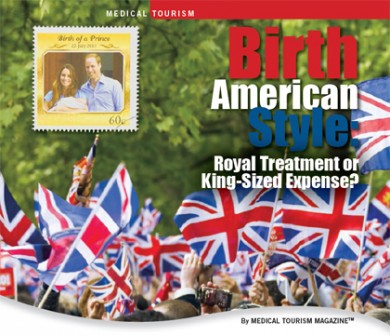 Americans who think Britain’s newest heir to the throne got the royal treatment should guess again. The birth of George Alexander Louis to Prince William and his wife, Kate Middleton, the Duchess of Cambridge, earlier this year cost $15,000 or about half as much as the average total price charged for a smooth delivery in the United States.

In fact, royalty and all that goes with it – birthing pool, satellite television, radio, Internet access, daily newspapers and exclusive catering staff in a private wing of one of the top hospitals in London — couldn’t raise a cup of tea to the United States, which owns the noble distinction as the costliest place in the world to give birth.
‍

According to a report in the New York Times, which cited data from a Truven Analytics study, the cost of a vaginal delivery in the United States was $18,329, while a cesarean section cost $27,866. The bulk of that bill goes to insurers. But, according to a survey by Childbirth Connection, one of the groups behind the New York Times report, families with health insurance coverage still have to pay some $3,400 in out of- pocket costs.
‍

Don’t Tread on Me

Those costs have tripled in just two decades, when women who gave birth in the United States typically paid for nothing other than a small fee for a private room or a television. If that wasn’t enough to scream “Don’t tread on me,” Switzerland, in comparison, charged on average $4,039 for a delivery without complications in 2012 and $5,186 for a C-section.
‍

Despite the lavish spending, the report noted, that the extra expense doesn’t even pay off. According to a study by the Institute of Medicine, the United States ranks at or near the top
‍

According to a study by the Institute of Medicine, the United States ranks at or near the top on virtually all maternity outcomes including both infant and maternal deaths among industrialized nations.
‍

on virtually all maternity outcomes including both infant and maternal deaths among industrialized nations.
‍

American families can point a small finger of blame at themselves, and the technology they are obsessed with. Every item – no matter how small – gets billed to American patients. Costs can include everything from a separate fee for the delivery room, each night in a semiprivate room, and a birthing tub.

Even placenta removal may be added to the cost, according to the New York Times, and each test can throw hundreds more on top of a new parent’s total bill. Meanwhile around the world, most doctors receive a flat fee for a mother’s care.
‍

Expensive Medical Bills: More Americans Can Bank on It

States do not have any better access to services than expecting mothers in other developed countries. They just get more of it, whether it’s necessary or not. The cumulative costs of approximately 4 million annual births in the United States is well more than $50 billion, the single biggest hospital payout for commercial insurers and state Medicaid programs, the New York Times reported.
‍

Of greater concern might be the fact that 62 percent of U.S. women with insurance not obtained from an employer didn’t have the luxury of maternity benefits. Even so, those that had maternity coverage were most likely subject to higher co-payments and deductibles from insurers.
‍

What’s Obamacare have to do about it?

What’s not yet clear is whether Obamacare, the healthcare reform legislation supposed to provide medical insurance to 30 million Americans now without coverage, will meet the needs of those who buy it starting next year. Or, as the New York Times writes, it “could break the bank for many states.” That’s because Medicaid, the national-state health insurance for low-income Americans, covers more than 40 percent of births nationally, and paid an average of $9,131 per vaginal birth in 2011.
‍

Less than 25 percent of those fees go to obstetricians, who already have some of the highest malpractice insurance rates. Instead, the majority of those fees pay for costly tests like ultrasounds, pain medications and pharmaceuticals to induce labor.