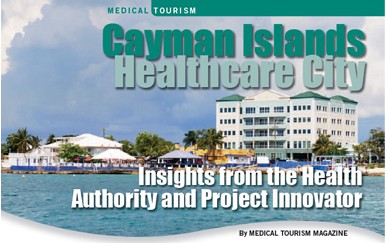 I believe that it is the fundamental right of every citizen of this world to access high-tech healthcare with dignity. Healthcare is one industry which is not limited by the availability of natural resources like petrol, steel, minerals etc. Healthcare is given by a skilled pair of hands, and availability of this is virtually unlimited provided we are willing to train more people. We believe that India will become the first country in the world to dissociate healthcare from the affluence. We will show to the world the country need not to be rich to offer healthcare to the citizens, and once we are successful in India, we would like to spread this concept across the world so that in our lifetime, healthcare will be dissociated from affluence of the family and the countries,”- Dr. Devi Prasad Shetty, Chairman of Narayana Hrudayalaya Hospital.

Shetty has taken his philosophy and put it into action.

The hospital project, officially called the Narayana Cayman University Medical Centre, will break ground in August 2012. The hospital, research center and its associated assisted living facility will be built on 200 acres at the High Rock area of East End. This will be built in phases over 15 years.
‍

The initial phase of the project involves the establishment of a 150-bed hospital and should start accepting patients in August 2013. Another part of his plan for this year is to develop a medical school, which should start accepting students by the end of this year. The medical school is an effort to fill the shortage of three to four million jobs in the healthcare sector.
‍

While Dr. Shetty’s long-term plan is to have a global impact on the delivery and price of healthcare, this medical center could have a significant impact on the 50,000 people living in the Caymans.
‍

The quality of healthcare in the Caymans is good for care up to, but not including, tertiary care. For more complex care, patients are transported off the islands, primarily to the United States. About $30 million is spent per year on healthcare overseas.
‍

This healthcare center will reduce the outflow of money from the Island to the U.S. healthcare system, residents will have faster access to care, and there will be local access to medical training. It has the potential to keep money in the Caymans and bring in new sources of revenue.
‍

“This will provide an enormous economic boost during the development of the infrastructure, and an influx of a new and educated workforce who will, as local consumers, boost local economy,” said Dale Sanders, Cayman Islands Health Services Authority. “Additionally, it is an excellent business model for medical tourism in an English-speaking country with a low crime rate, similar culture and within a very short flight from the U.S.”
‍

Dr. Shetty signed an agreement with the Cayman Islands government outlining a number of laws that the government has agreed to amend or introduce to facilitate the planned medical facilities.

So far they have passed the Health Practice Law, which enables medical staff trained in India and other overseas countries to practice in the Caymans; the Tax Concessions Law, which exempts companies from potential future taxes; and the Medical Negligence (Non-Economic Damages) Law, which puts a maximum on pain and suffering damages awarded in medical malpractice cases to $500,000.
‍

Sanders said that there are mixed emotions among local providers for this project.
‍

“Some see it as a threat and resent the concessions that have been made to recognize the credentials of the Indian physicians who will be practicing here,” he said. “Others are quite positive and see the benefits to local patient care and overall impact on the economy.”
‍

In addition to Indian physicians becoming part of the labor force, Shetty believes that this will attract a number of medical professionals from the U.S.
‍

“These doctors naturally want a country which is safe, has good weather, good infrastructure to bring up their families, close to the U.S. to keep the family ties and has a proactive government which is willing to support and no taxes which is very exciting for most professionals,” he said.
‍

The potential for U.S. patients to travel to the Cayman Islands will be increased when the percentage of American physicians increases. With around 40 million residences in the Caribbean region, this facility will not be depending on American patients but is expected to attract a good number of them.
‍

“We believe that unless something dramatically happens in the U.S. there will be a number of Americans travelling outside their boundaries seeking quality affordable healthcare,” Shetty said. “Since the Cayman Islands is a very close destination we believe that they will use these facilities, and we are going to have an American partner to help their decision-making process and to increase their comfort.”
‍

This hospital will eventually have 2,000 beds, but for the first phase, 150 beds will provide tertiary care currently unavailable in the Caymans, including cancer treatments, organ transplants, bone marrow transplants and open-heart surgery. This will also provide better access to high specialty care for all residents in the Caribbean.
‍

A comparison with the U.S.

After implementing a somewhat similar idea in India and now in the Caymans, the next stop is Africa.
‍

In an article from the Economist, Shetty said he set out to apply Henry Ford’s philosophy towards the Indian healthcare system – using mass-production techniques to cut costs through specialization and economies of scale.
‍

And that is what he did.
‍

An article by the CayCompass.com compared the Narayana Hrudayalaya Hospital in Bangalore with the average of leading hospitals in America.
‍

“Everyone thinks that the poor quality of healthcare delivery in Africa is because they are poor. The reality is that they are extremely short of skilled manpower,” Shetty explained. “If you can build institutions to treat and train in Africa, it will transform the healthcare in no time.”
‍

The plan for Africa is similar to that of the Cayman Islands. Once the project in the Caymans proves to be a success, Shetty plans to develop a larger chain in Africa.
‍

This project is expected to be less complex in getting it off the ground for a couple of basic reasons. First, the costs of building and managing hospitals in most African countries are not very high. The reasons are that the weather there does not require central air conditioning, which is actually a major cost in most countries.

Also, the manpower to manage a hospital is considerably inexpensive. Secondly, in the U.S. regulatory restrictions limit innovations, where as in other countries the governments are desperate so they are more flexible.
‍

When Asia, Africa, Middle East and Latin America join the healthcare delivery industry, the cost of everything starting from drugs to medical equipments will go down across the world, and there will be availability of huge skilled manpower across the world. So the manpower cost also will be controlled.”
‍

Only time will tell what the future will bring. If it is as Shetty has predicted and plans to accomplish, the future of the global healthcare industry could be very bright – and affordable.

Inside Cigna: An Interview with Dr. Faisal Gilani

Make Your Move a Smart One: Review Your Insurance Before You Go